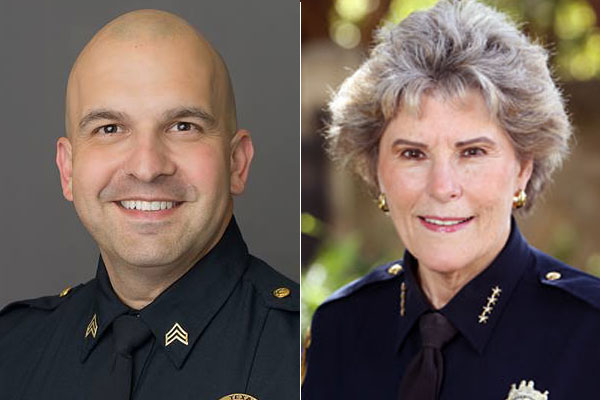 Sgt. Javier Salazar of the SAPD will face off against incumbent Susan Pamerleau in the November 8 race for Bexar County Sheriff. (Courtesy photos)

With his landslide win in the May 24 Democratic runoff, Sgt. Javier Salazar of the San Antonio Police Department will now face off against Republican incumbent Susan Pamerleau in the November election for Bexar County Sheriff.

In a race that began in March with four candidates in the Democratic primary, Salazar racked up almost 75 percent of the vote in this week’s runoff against his last primary opponent, Andy Lopez. Sgt. Javier Salazar, celebrates his victory in the Democratic runoff for sheriff on May 24. (Photo: Facebook)

Pamerleau, who was elected to her first four-year term in 2012, did not have any challengers in the Republican primary. She is Bexar County’s first woman sheriff.

The contest between Salazar and Pamerleau marks one of those rare occasions when voters have a choice between two apparently LGBT-friendly candidates in a local election. Both have been interviewed by Out In SA — Salazar last December and Pamerleau in April of this year.

In his interview, Salazar told Out In SA the biggest issue affecting the Sheriff’s Department is low morale, which he blames on poor leadership.

“I think the Bexar County Sheriff’s office is full of great police officers but there’s a disconnect between the rank and file officers and the top tiers. That’s sad. It creates an unhealthy environment for the troops and the public. Employee morale affects public safety,” Salazar explained.

Pamerleau has a different opinion. When asked about low morale among her employees she said, “It depends on who you talk to. [The office used to be] the good-old boys, fraternalism; it was who you knew — not what you knew or how well you performed. We’ve held people accountable, and if somebody has low morale because they’re being held accountable, that’s what happens. I think it’s reasonable to expect people to do their jobs.”

Recently, Pamerlealu made news after the Deputy Sheriff’s Association of Bexar County called for a vote of no-confidence in her leadership citing low morale.

In terms of LGBT issues, both candidates have said they would appoint a liaison to the LGBT community.

“Absolutely,” Salazar said. “The SAPD has an LGBT liaison, Assistant Chief Jose Banales. I would like to create a team of officers that are liaisons to different segments of our population like the military, the African-American community, the Hispanic community and the LGBT community would definitely have a liaison.”

Pamerleau said, “. . . we’re glad to designate liaisons to the LGBT community — one for Detention and one for Law Enforcement, so that those designated have the appropriate professional expertise to respond to questions or concerns related to different functional and operational areas.”

When asked about LGBT sensitivity training for law enforcement cadets, Salazar said, “Yes. It’s necessary to teach cadets how to interact with the LGBT community because it’s a real population, it’s a sizable population, bigger than we even know.”

Pamerleau told Out In SA the training offered to cadets in the Sheriff’s Department already covered LGBT issues.

Because she is a Republican, Pamerleau has been more measured in her outreach to the LGBT community. Despite that, she has met with members of the San Antonio Gender Association to address their concerns about the treatment of transgender prisoners. At the time of her interview with Out In SA in April, she was planning a second meeting with the group.

As I drove to meet Tencha la Jefa at her home on San Antonio’s West Side, Siri took me on...