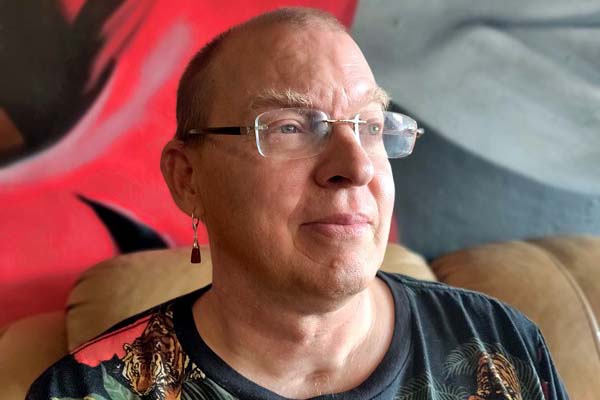 When Donald J. Trump was elected president in 2016, Jim Kane decided it was time to come out of retirement.

With his 30 years of experience as an LGBTQ activist and as the former co-editor and publisher of San Antonio’s 2005 gay newspaper, The Bexar Vortex, he felt that his high-level administrative background would be a valuable asset as he served as a precinct chair with the Bexar County Democratic Party.

As San Antonio prepares to commemorate the 50th anniversary of the Stonewall Riots, an event credited for sparking the modern gay rights movement, the 53-year-old Kane is looking back on his journey with bittersweet pride. It’s easy to see, as I sit across from him at Alida, a cozy West Side cafe, how the milestones of his life have closely aligned with our city’s own gay rights movement.

Kane may not be senescent by Digital Age standards — he tested HIV-positive 33 years ago, then was diagnosed with AIDS 27 years ago. Still, within a society prone to institutionalized discrimination, that makes him an elder statesman.
Kane’s consciousness was awakened in the early 1980s, a time he euphorically describes as “magical.” After graduating from McCollum High School in 1984, he enlisted in the Navy. Stationed in Connecticut, he found that he was only a short train ride from New York City.

“I was 19 in dress blues in Greenwich Village,” he recounts with dramatic flair, dangling black earring glistening in the light. While there, he even visited the infamous New St. Mark’s Baths.

“Then, the plague hit us,” he says, recalling the uncertainty surrounding AIDS, which was first mentioned in a 1981 New York Times article as a “rare cancer seen in 41 homosexuals.”

Kane says he doesn’t think it’s possible to fully describe — not with any true justice — the nonverbal cues gay men used to make connections during this socially unreceptive period. The codes even included wearing different colored handkerchiefs in one’s back pocket to signal sexual preferences.

“There was a lot of eye contact [and] body movement,” he says. “There was a dance involved, though there was no [initial] touching. I’m not sure that we necessarily have that dance anymore.”

And, of course, there was the covert language.

“That’s where [the terms] ‘Mary’ and ‘Nelly’ came from,” he says. “Code words that you’d use to explain that you were one of us.”

At that time, gay bars provided one of the few places where LGBTQ people could be themselves without a climate of fear.

“I don’t think that people understood that these were our safe spaces,” he asserts.

Kane feels grateful for the chance to honor the pioneers during Pride Month.

“We owe our freedom to the sisters of the swishy sissies, because [they] were the ones who went out in public and were, unabashedly, who they were,” he says. “They were the extravagant, flamboyant, out, homosexual males, and they’re the ones who paved the way for us.” He leans into my voice recorder. “You have to have balls to be a sissy. If you’re swishy, sissy — swish, baby. Because you come from a history of leading the revolution.”

I ask him what three pieces of advice he’d offer in a book about gay love.

After a long moment of deep contemplation, he replies: “The first thing you have to realize is that your love is going to be going through trials that heterosexuals never go through. My second husband lost a number of friends when we had our commitment ceremony, because [some friends] couldn’t deal with it.”

Kane also cautions that grieving is less accepted — by heterosexuals — when it comes to gay relationships.

“I want to remind people when my first [partner] died, I wasn’t allowed to grieve.” As he explains, his email signature, which reads Twice Widowed Disabled Veteran Living With AIDS, comes to mind. “On my second [partner’s death], I wasn’t sure how to grieve, because we’re not taught how you grieve for a gay relationship.”

“Someone’s got to wash the dishes. Someone’s got to take out the trash,” he says. “But more importantly, never fall for that, ‘Who’s the wife?’ There isn’t one. OK? We’re both men. There is no wife. That’s the entire point.”

Third, and last, Kane warns gay couples of the perils of trying to be a carbon copy of a heteronormative relationship.

“You have to make your own decisions about what your relationship is.”

In 2005, Kane’s second partner passed away, primarily because he didn’t have access to Kane’s military benefits.

“Anytime someone brings up [the 1996 Defense of Marriage Act, which the U.S. Supreme Court struck down in 2013], I tend to grit my teeth and say something ugly,” he says. “Because, regardless of what anyone says about DOMA, it was bad, and people died because of it.”

He looks back at most of the 2010s as a new hope for the LGBTQ community and gives kudos to the younger generation for being powerful advocates for fairness and equality. Indeed, they make him feel like a “proud grandfather.”

“Actually, one of them not too long ago, came up to me and said, ‘How are you, you old queen?’ I was like, ‘Oh, shit. I made it to old queen,’” he says with a beaming smile. “I am going to wear that with pride.”

Originally published in the San Antonio Current. Until Donald Trump tweeted out his plans to ban transgender troops from entering...