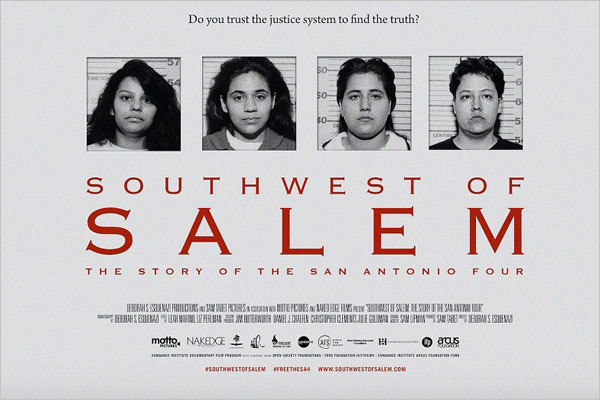 A documentary exploring the dramatic case of four San Antonio women wrongly convicted of gang-raping two children in the 1990s has been selected as a finalist for the prestigious Peabody Award.

For years, Southwest of Salem: The Story of the San Antonio Four, by documentary filmmaker Deborah Esquenazi, has been the primary vehicle for drawing nationwide attention to the problematic prosecution of Elizabeth Ramirez, Cassandra Rivera, Kristie Mayhugh and Anna Vasquez, all of whom were handed lengthy prison sentences after being convicted of brutally assaulting Ramirez’s young niece in a series of bizarre rituals. The film, which premiered at Tribeca film festival last year to rave reviews, builds off the early work done by former Express-News journalist Michelle Mondo, who was the first reporter to highlight the many serious problems with the case in a series of stories for the local daily (see our 2012 story on the case here).

The day before Thanksgiving last year, Texas’ highest criminal court ruled that all four women were unquestionably innocent of the charges against them.

The Peabody jurors selected Southwest of Salem as one of dozens of features or documentaries that “represent the most compelling and empowering stories released in electronic media during 2016.” It’s been nominated alongside films like O.J.: Made in America, which won this year’s Oscar for best documentary.

The Tennis Club of San Antonio (TCSA), affiliated with both the United States Tennis Association and the Gay and Lesbian...