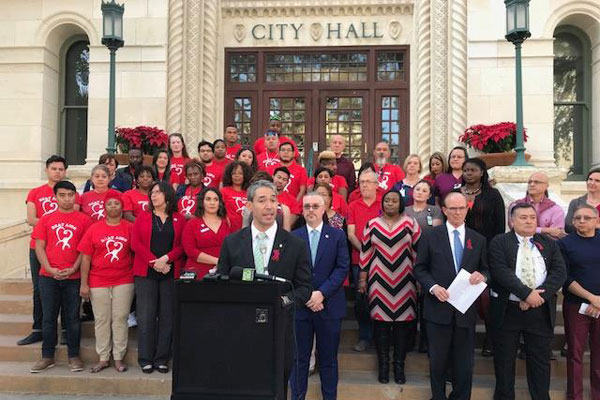 San Antonio has become the first city in Texas to sign onto an international initiative to eradicate AIDS by 2030.

Mayor Ron Nirenberg signed onto the international initiative, which was originally launched in Paris in 2014, in front of City Hall on November 30, the day before World AIDS Day.

“With coordinated support from our community partners and a commitment from city and county government, we have an opportunity today to eliminate new cases of HIV,” Nirenberg said. “The time is now for San Antonio to do more, to be better, to engage people without shame or stigma.”

San Antonio had the largest cluster of new HIV infections in the state in the summer of 2016 — last year, 360 people in Bexar County were diagnosed with HIV, adding to the roughly 6,000 people already living with HIV in Bexar county, according to Metro Health.

Part of the city’s mission is to end the stigma surrounding HIV, which has become more treatable and preventable over the last decade. People diagnosed with HIV are expected to live long lives if they begin treatment soon after being diagnosed, and contracting the virus can be prevented with a daily pill that is 92 percent effective. Additionally, once HIV levels decrease to the point where they cannot be detected in a blood test after treatment, the virus becomes less transmittable.

“Joining Fast Track Cities and following the 90-90-90 model will allow us to transform HIV from a communicable disease to a chronic disease and eventually eliminate it altogether,” said Metro Health Director Dr. Colleen Bridger.

The alliance of local leaders and health officials behind the initiative plan to have quarterly meetings for the public to learn about the initiative, and what actions can be taken to decrease HIV cases in San Antonio.

San Antonio is the fourteenth city in the country to sign onto the initiative.

Two LGBT Democrats from the Dallas-Ft. Worth area have announced their candidacy for seats in the Texas House of Representatives....