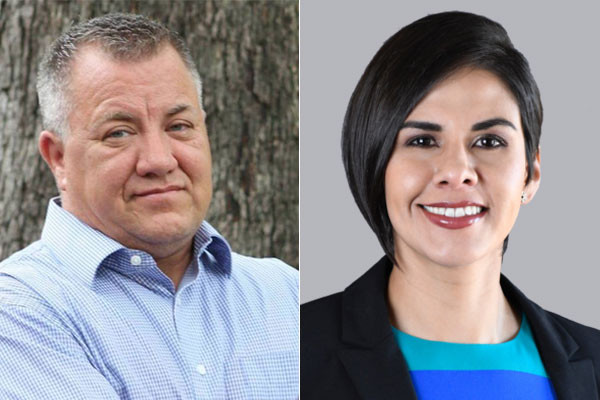 Two LGBT Democrats from the Dallas-Ft. Worth area have announced their candidacy for seats in the Texas House of Representatives.

Gonzalez is an attorney and former president of the Stonewall Democrats of Dallas. She formerly worked with the Obama for America campaign as the voter protection director in Las Vegas, Nevada. She also served as an immigration policy intern at the White House in 2012 and as a legislative assistant in the U.S. House of Representatives in 2011. She is a graduate of WMU Cooley Law School in Michigan.

“Our Democratic values of fairness and equality are under attack in Austin and I can’t just sit back and watch,” Gonzalez writes on her campaign Facebook page. “I am someone who understands the importance of hard work and I am ready to bring the passion and the energy we need in 104 to fight for our communities but I can’t do it alone . . . Together we can make a difference for Texas families.”

On his Facebook page, Jones describes himself as a “trans man helping to change the world through support, education, empowerment, advocacy and love.” He is the founder and executive director of Trans-Cendence International, an organization that supports the transgender community and their significant others, families, friends and allies.

Jones is a disabled veteran who served in the United States Coast Guard where he worked as an emergency medical technician doing search and rescue. He is a graduate of Texas A&M University at Commerce where he studied music education.

On his campaign Facebook page, Jones says, “I am committed to running a common sense campaign with the courage to stand up for issues we Texans face daily, with a commitment to work for progress.”

Despite Reports, Dallas County Sheriff Says She Hasn’t Resigned to Run for Governor

By Patrick Svitek, The Texas Tribune November 29, 2017 *Editor's note: This story has been updated throughout. Democratic Dallas County...