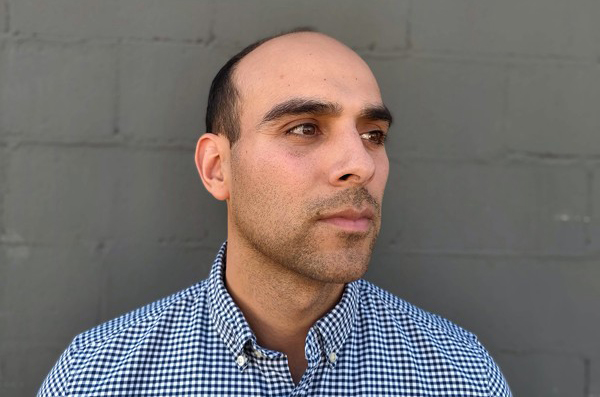 State Rep. Roland Gutierrez has served five terms in his current seat, and Xochil Peña Rodriguez is the daughter of former U.S. Rep. Ciro Davis Rodriguez. Having such high-profile opponents in the Democratic primary means Ramirez needs to build his community clout from the ground up.

“Certain people already have those [political] connections made for them,” says Ramirez, 34. “I’ve been doing a lot of cold calling.”

I’m sitting across from the first-time candidate at Café Azteca on the city’s East Side. During our conversation and later, during an SD 19 candidate forum, I notice that he has neither Gutierrez’s political polish nor Peña Rodriguez’s stately manner of speaking. He is, in fact, an out-and-proud regular guy.

In the past, people have encouraged Ramirez to sound more professorial and attorney-like, but he prefers to leave the big words at home.

“In the real world, folks don’t necessarily want that,” he says. “They want someone who is relatable.”

In the age when that kind of relatability can be an asset when challenging the status quo, Ramirez’s political inexperience could end up being his greatest strength. Need proof? Look no further than the candidate he aims to unseat.

In 2018, Flores’ regular-guy approach helped him flip SD 19, making him the first GOP member to hold the historically Democratic seat in 139 years.

Come November, the eyes of Texas will again be upon this battleground district. If it flips, Lt. Gov. Dan Patrick could lose the Republican super majority that allows legislation to be brought to the Senate floor without Democratic approval.

Upon making the decision to run, Ramirez sought advice from former San Antonio Councilman Rey Saldaña,, and he still keeps those words in mind on the campaign trail.

“He said, ‘Win or lose, at the end of it all, you will have a great chapter for your book.’”

Ramirez still keeps those words in mind on the campaign trail.

As we talk, I learn that the plot of Ramirez’s book has already taken some interesting turns. Before going to St. Mary’s School of Law, he earned a science degree with an emphasis on cell and molecular biology. However, he soon realized he wasn’t a “lab person.”

“I’m definitely more of a social animal,” he says.

While in law school, he landed an internship with the district attorney’s office and fell in love with criminal justice.

His previous work in cancer research trained him to look at treatment, and in his current role, he wants to do more to help people rehabilitate. Unfortunately, he says, policy and funding sometimes stand in the way.

“That’s the frustrating part,” he adds.

Ramirez decided running for office would give him a chance to make a positive impact on future generations. His understanding of the human body seems to have informed has informed his holistic approach to his three talking points: children, families and social issues.

“You’re talking about the whole child. Mental health. Healthcare,” he explains. “Strengthening families [means ensuring people make] a decent wage. Paid parental leave and paid sick leave. How do we make sure they’re not one medical bill away from living on the streets?”

Still surprised at Ramirez’s background in biological research, I ask him what message gets lost when it comes to cancer.

“[That] it doesn’t discriminate,” he replies matter-of-factly. “Cancer is one of those things where, no matter your age, no matter your race, no matter where you come from, if it shows up, there’s a possibility that it [can do] some damage.”

Prostate cancer was his area of research. He agrees that men are less likely to check-in with a doctor, even as they get older. I ask him why that is.

“I think this just goes back to men having this idea that ‘I’m invincible. I’m not gonna be hurt. Unless it’s bleeding or I can’t feel it or it’s falling off … I don’t have to go,’” he says. “I wish more men would go and get themselves checked when the time is right. Cancer is one of those things that can pop up when you least expect it, and you’ve got to be able to catch it early.”

He laughs when I ask him to share his biggest pet peeve.

“So, I do get frustrated, oftentimes, at folks when they drive. I’m not a big horn honker. I’m not one to do anything vulgar, [but] there is definitely some yelling and some raising of my voice in the car.”

Ramirez’s car is free of coffee spills, though. He’s energized enough in the morning without caffeine.

“When you find you’re already running late for work and you get behind the wheel, your adrenaline starts running and you start gearing up,” he says. “So, my adrenaline’s pumped back on [highways] 151 and 90. So, by the time I [get to work], I’m good to go.”

I ask what he most wants people to know about him.

“People who know me at the courthouse know that I don’t write things down. I don’t take notes. I don’t read from notes,” he says. “I like to think with my mind but speak from my heart. When you do that, you’re going to make mistakes. You’re going to sometimes state the wrong thing. Hopefully, people will realize that you’re coming from a place of passion and emotion.”

Author Lydia Otero to Read From ‘In the Shadows of the Freeway: Growing Up Brown and Queer’ at Esperanza Center

Lydia R. Otero, an author and tenured professor in the Department of Mexican American Studies at the University of Arizona,...