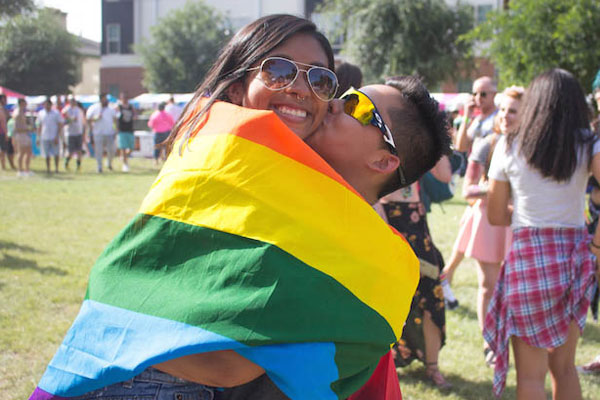 Organizers and volunteers at are busy making the final preparations for two days of events marking the culmination of Pride Month in San Antonio. 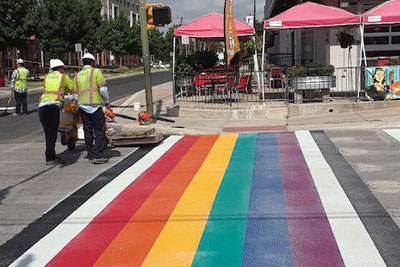 Photo by Roberto C. Treviño for Out In SA.

5 p.m. – Rainbow Crosswalk Ribbon Cutting at Luther’s Cafe
City Councilman Robert C. Treviño and local LGBT groups will host the ribbon cutting for the rainbow crosswalk which was installed on the corner of North Main and Evergreen on June 27. The ribbon cutting will be followed by Pathway to Policy, a community conversation with Councilman Treviño.

7 to 9:30 p.m. – Grand Marshal Meet and Greet at Bonham Exchange
The community is invited to come out and meet the Pride Parade Grand Marshals, Bexar County Sheriff Javier Salazar and Bruno “Ralphy” Lozano, the Mayor of Del Rio, Texas. Other special guests include the entertainment stage headliners who will perform at Saturday’s Pride festival. Food provided by Chipotle. No cover. Free and open to the public.

June 30: A Day Filled With Pride
The Pride Bigger Than Texas Festival and Parade is slated for Saturday, June 30 along the Main Avenue Strip. Both events are being sponsored by USAA and Bud Light. This year’s theme is “Stand Up! Stand Out Be Counted!”

The parade and festival are part of a year-round roster of events which Pride SA organizes. These include a softball tournament, a bowling tournament, a Halloween 5k run, a film festival and an annual shuttle service to Night in Old San Antonio. 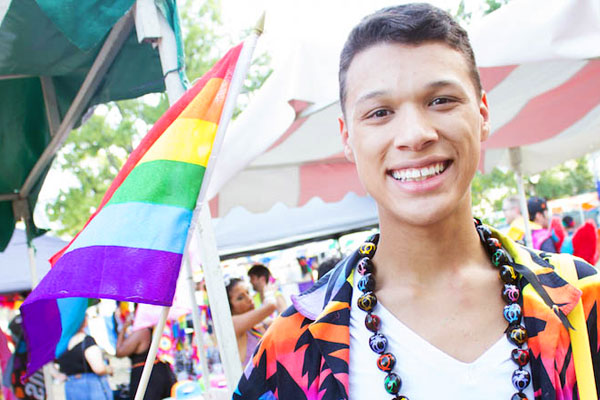 Festival For All
The festival, which is held in Crockett Park, opens its doors at 11 a.m. and closes at 7 p.m. As usual, there will be booths sponsored by local LGBT businesses and organizations, and plenty of food and drinks. Admission to the festival grounds is $10.

A Pride Proclamation will be read by City Councilman Treviño just before the festival gates are opened. 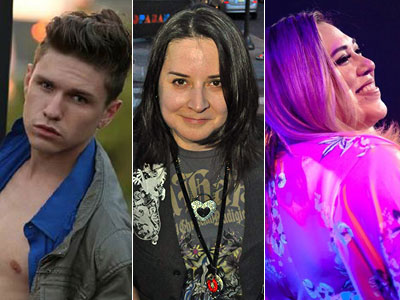 Three musical acts from NBC’s singing competition, The Voice, will perform as well: Angel Bonilla (5 p.m.) and Nedra Belle, who will sing with the drag queen trio Stephanie’s Child (6 p.m.). Emcee for the entertainment stage is Autumn Summers.

Those looking for more athletic entertainment can catch a few rounds of Pride Championship Wrestling at 3 p.m.

Also at 3 p.m., festival-goers will witness local couples tying the knot at the Peace, Love, and Pride mass wedding to be officiated by Judge Ron Rangel. Those wishing to get married on the day of the festival must have previously secured their marriage licenses by June 28. 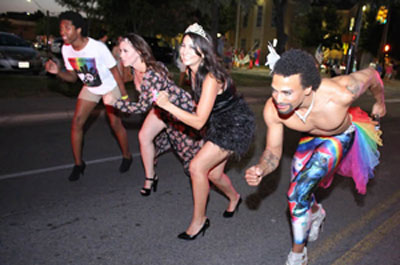 A Pre-Parade Gallop
North Main Street will serve as a track for the Krystal Kelly Running of the Queens High Heel Race, which begins at 8:45. All heels must pass the strict inspection of the Running of the Queens compliance judges. Those wishing to participate in the race should check out this link. 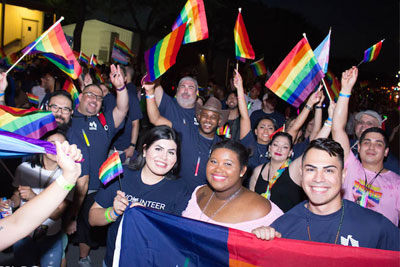 Marching with Pride
This year’s Pride parade will be one of the biggest yet with over 125 entries registered to participate. The parade steps off at 9 p.m. at 1812 N Main Ave and continues south to Lexington Avenue where it ends.

After the parade, the community is invited to the Pride on the Strip Block Party hosted by Heat Nightclub, Knockout Sports Bar, Luther’s Cafe and Sparky’s Pub.

Check out our slideshows of the 2017 Pride Bigger Than Texas Festival and Parade.

Originally published in the San Antonio Current. What a difference 21 years can make. In 1997, then-mayor Howard Peak led...