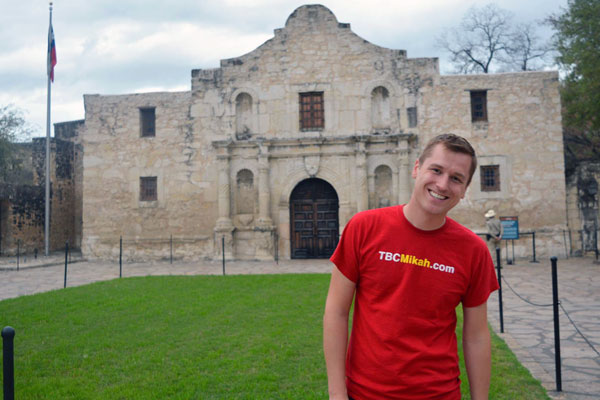 Professional countertenor Mikah Meyer is on a quest to become the youngest person to visit all 411 parks in the National Park System during a single trip.

“The main motivation is just truly living to share this idea that tomorrow is not guaranteed,” Meyer recently said in an interview with KENS-TV. “Its a lesson I had to learn the hard way through my dad’s passing when I was young.”

Meyer’s father died of cancer when Meyer was 19-years-old and it’s taken him over 10 years to plan and save for the trip. He said his father’s death taught him to appreciate people and to live life to the fullest.

He also said he settled on visiting the National Park System after figuring its parks must be among “the most beautiful in America.”

As an openly gay pastor’s son, Meyer hopes his world record will encourage LGBT kids to set higher goals for themselves and to go beyond stereotypes.

Meyer will be performing solos and talking about his National Parks project at St. David’s Episcopal Church on Sunday, March 26 during the 8:00 a.m. and 10 :30 a.m. services.

Some of the songs Mikah plans to perform are “Give Me Jesus,” “Wade in the Water,” and “But Who May Abide” from Handel’s Messiah.

Greg Barrio's play Seven Card Stud will be the Overtime Theatre's final production staged at its current location on Camden...