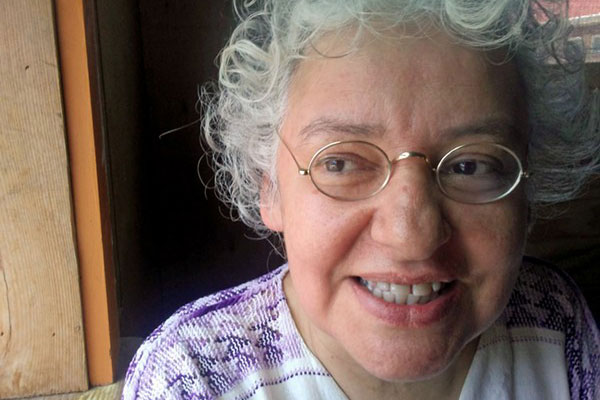 I’m sitting at Sweet Yams Café on the city’s East Side with Graciela Sanchez, director of the Esperanza Peace and Justice Center. The sunlight cascades down the right side of her face through the adjacent window, giving her a resplendent glow.

Sanchez, who has devoted her life to activism of all kinds (if it’s unjust, she’s on it) under the umbrella of the Esperanza, is reserved as we await our meal. In fact, she’s such a strategic word economizer that passersby probably assume she’s interviewing me. It’s more than just her wariness of being labeled a Cantinflas, a term she uses to describe an overly talkative person who doesn’t seem to actually say anything of substance. She cites Councilman Roberto Treviño and former Councilman Roger Flores as examples of the type. No, Sanchez excels at the art of saying just enough to make her point while saving her energy to fight another day.

My 2011 Plaza De Armas interview with her was a good starting point for my study of this long-standing, and uncompromising, seeker of justice. Sanchez, now 58, has been in the spotlight lately for her work defending the Hays Street Bridge on the near East Side against encroaching development.

The nearly-synonymous names of Sanchez and the Esperanza have long had what marketing experts might refer to as a brand challenge. Sanchez describes her career work as “holistic,” which may be where the organization’s labeling intricacies begin. The Esperanza doesn’t just exclusively work on women’s issues, Latino issues or queer issues, but all of the above and more.

She says she’s sad the organization has been erased by the queer community. Unless they stumble upon its programming online, Sanchez feels many young LGBTQ people haven’t heard of the Esperanza, which means those in search of support, mentorship and a sense of local history don’t know the center is a viable resource.

Sanchez, who found support in the book This Bridge Called My Back: Writings By Radical Women of Color while she was studying at Yale University, finds it amusing that after the election of President Donald J. Trump, people are asking for an interconnection between communities. “We’ve been doing that for 31 years,” she says.

Many queer people of color may feel the need to choose which generational fight to take up. They may feel peer pressure to choose to between Latino or LGBTQ activism. Sanchez says that she’s not willing to be one or the other. “This is my whole self,” she says. “My identity includes my Latino, queer, feminist and working-class roots.” Which would be a ditto for the Esperanza.

The disadvantage of not choosing a team is that “others erase you,” Sanchez warns. When she started doing cultural arts programming, Latino-focused groups didn’t see the Esperanza as a Latino organization and, because the center works with blue-collar communities on the West Side, some LGBTQ groups have said they’re not queer. “Someone else is making that decision for us,” she says.

In the Esperanza’s early days, Sanchez says the press didn’t always refer to her as the executive director but as “a self-identified homosexual.” The demonization came from deep social crevices. But she stayed the course by concentrating on bringing multiple issues together through the presentation of artists’ work and films, and through organizing efforts.

While she was fighting for funding and trying avoid “getting kicked out of our buildings,” she wanted the people to “see those connections.” “It’s a privilege to just think about one issue and to not be concerned about other issues,” she says.

Here’s another example of a pointed form of activism. It was when she saw that the Express-News’ advisory board didn’t have any LGBTQ people on the board. “I remember telling Bob Rivard, ‘When you put in a queer person, make sure it’s not a white gay man,’” she recalls. “‘Let your choice reflect the community.’”

Later in the conversation, she observes, “People don’t want to become political even though their lives are political.” She refers to Republican platforms and the gay Republicans who support the party’s planks. “All our lives our political. Everything we do everything we say how we think, how we act… is political.”

Sanchez says you can still see the little scratches on her bumper where Ron Nirenberg for Mayor stickers were previously. Though the mayor “always says hello,” she doesn’t feel he’s listening to community concerns. “He’s not the person who was running for office a year and a half ago. How can I put his name out there in an affirming way when I just [don’t] think he’s listening to us anymore?”

Here’s an example of how Sanchez takes charge. On the mayor’s birthday, she posted two images and connected them to his Facebook page. “One was, ‘Wishing the mayor [had] the strength to be courageous to do good for the community for years to come,’” she recalls. The image was of the controversial Hays Street Bridge. The second image was 40 people posing as though they were holding up the bridge. It read, “Happy Birthday, Ron!” The mayor’s staff called Sanchez immediately. They wanted to know why she would post something like this on his birthday. She was prepared with an answer. “We are holding him accountable. This is a form a speech. This is a form of organizing,” she says. She said she’d been asking for a meeting with Nirenberg for about a year. A meeting was scheduled within a week of the birthday post.

When I ask her if she’d ever consider running for office, it seems like the idea has occurred to her. “I would be so demonized,” she says. “You remember what happened to Elena Guajardo,” the first openly lesbian council member. “They just creamed her.”

Her focus on the Hays Street Bridge makes more sense when you consider that the Esperanza has a history of working on issues as far-ranging as free speech to housing. One of her more memorable protests happened in 2013 when she worked to preserve the Univision Building, which is now the Agave apartments. When the preservationists lost in court and she saw the demolition starting, she says, “The only thing I could do is jump over the fence. And people followed me.” They stopped the demolition for a few hours and got arrested.

Sanchez, however, seems happy to not take the lead in every situation. Amy, her partner of 19 years and an attorney, was recently working on a brief relating to the Hays Street Bridge. “I was basically her cheerleader,” she says.

Do you see yourself more of an activist than a human being? Can you turn it off? I ask.

“No,” she replies. “If I’m alive, I see. I’m a person with a conciencia – with a consciousness making sure there is justice and peace.

Last question. What’s the most memorable compliment anyone has ever given you? I ask.

She thinks for a moment then shakes her head. “I don’t remember.”

That’s an answer in itself.

Last June, in a 7-2 decision, the Supreme Court of the United States ruled in favor of the owner of...