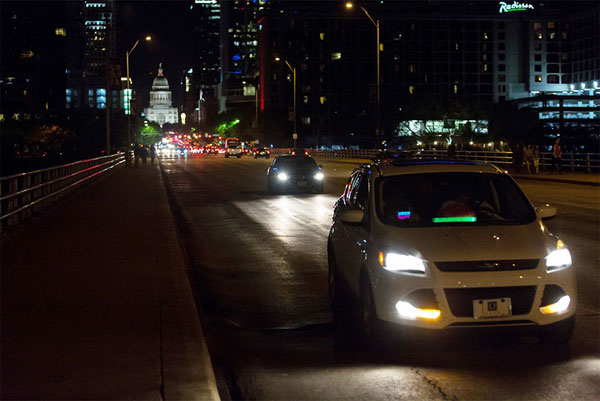 The Senate sponsor of a bill meant to create statewide regulations for ride-hailing companies such as Uber and Lyft said Thursday he has stripped a controversial amendment from it that would define “sex” as “the physical condition of being male or female.”

The move comes after representatives from Uber and Lyft called the surprise addition of the amendment during debate on HB 100 in the House disappointing and unnecessary — though both companies stopped short of saying they’d withdraw their support.

“This legislation is really about establishing the kind of fair and consistent framework for ridesharing services that will allow Texans to travel more easily and get home safely,” State Sen. Charles Schwertner, R-Georgetown, said in a statement to The Texas Tribune. “As the Senate works to build consensus around HB 100, we continue to evaluate a number of changes that we hope will ultimately improve the bill and increase its chances of becoming law.”

The bill was left pending in the Senate State Affairs Committee Thursday morning, but committee chairwoman Joan Huffman, R-Houston, said the measure would be voted on later in the afternoon.

Under the new version of House Bill 100, transportation network companies would have to implement non-discrimination policies to ensure drivers don’t discriminate against riders.

The “sex” amendment by state Reps. Tony Tinderholt, R-Arlington, and Briscoe Cain, R-Deer Park came amid a legislative session in which some GOP lawmakers have pushed for measures that would keep transgender Texans from using public bathrooms that match their gender identities. The amendment passed on a 90-52 vote after the author of House Bill 100, Chris Paddie, R-Marshall, said he viewed it as simply “further defining something that’s already defined.”

“The bottom line is there’s no huge reason behind it. I just wanted to clarify,” Tinderholt said last month after several House Democrats removed their names from the bill, pushing back against claims that his amendment could lead to discrimination against the LGBT community. “The amendment was simply for clarification. It’s really, truly that simple.”

He did not respond to request for comment Thursday on the removal of his amendment.

A spokeswoman for Equality Texas told the Tribune that the group would not oppose Schwertner’s substitute. The group had previously launched a national callout asking both Uber and Lyft to disavow the bill with the “sex” amendment tacked on.

“The Texas House amendment to HB 100 included a nonsensical definition of sex in an attempt to discriminate against transgender people using ride-hailing apps,” DeAnne Cuellar, communications coordinator for Equality Texas, said. “Singling out transgender people as not worthy of non-discrimination protections is antithetical to both their corporate values and the Texas spirit of welcoming all to participate in our vibrant economy and communities.”

HB 100 would establish a statewide framework to regulate ride-hailing companies and undo local rules that the two companies have argued are overly burdensome for their business models.

The primary issue is whether companies such as Uber and Lyft should perform fingerprint-based background checks, much like many cities require of taxi drivers.

HB 100 would require ride-hailing companies to have a permit from the Texas Department of Licensing and Regulation and pay an annual fee to operate throughout the state. It also calls for companies to perform local, state and national criminal background checks on drivers annually — but doesn’t require drivers to be fingerprinted, as Austin’s ordinance does.

After Austin implemented such a rule, Uber and Lyft spent millions in a campaign last year to overturn it — an effort that ultimately failed when voters rejected a ballot proposition on the issue. After the vote, both companies immediately suspended services in the city, and the resulting ride-hailing vacuum attracted several start-up ride-hailing apps to Austin that have said they comply with the city’s rules.

Several people testified in favor of HB 100 at Thursday’s committee hearing. Trevor Theunissen, Uber’s public affairs lead, said they were in support of statewide regulations since “local regulations vary as much as Texas’ landscape.”

“At Uber, we’re supportive of reasonable requirements for transportation network companies that ensures the safety of drivers,” he said Thursday. “Texas has been an incredible state for us. We’re improving mobility by offering people more transportation options — whether they’re in a big city or a small town.”

On Tuesday, May 9, the Texas House approved House Bill 3859, which would allow faith-based adoption agencies to deny placement...