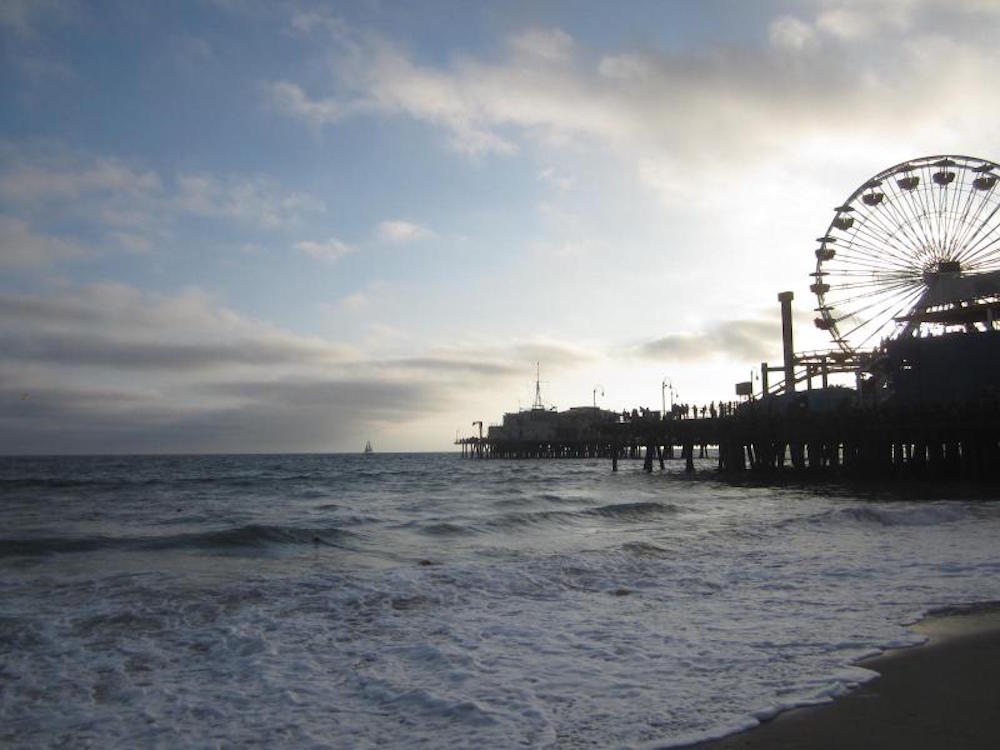 It’s a lazy Sunday afternoon in late July and we’re sitting in a steaming hot apartment. We moved in a few months ago so we could save enough money to buy our first home, and in the meantime we’re dripping our body weight in sweat. The window unit in the living room fights hard to blow a cool, damp breeze in only one direction, and the San Antonio humidity is unbearable inside this tiny space. We need to go somewhere–anywhere–to escape from this dank heat. The beach? It’s hot there, too. And I don’t feel like batting off seagulls. A cruise? The gambler in me would leave us broke in that dark casino. San Francisco? A last-minute flight would be staggering right now.

But couldn’t we drive there? Bingo. And just like that, we decide to YOLO our way across the western half of the country.

We can’t just drive to California in one shot, or at least we don’t want to. I pull out an old journal and start jotting down places I want to see. This will be the consummate summer road trip–in which we stop at sights like the World’s Biggest Ball of Yarn, listen to Van Morrison, and pull over at old gas stations to ask for directions if we’re lost. Maybe I’m romanticizing it, but I tend to do that and Christi lets me. We Google-map the drive. It’ll take at least eight hours to get out of this sprawling state we call home, so we push-pin our first stop in Las Cruces, NM. From there, we’ll scoot over to Vegas, head back down to LA, drive up the Pacific Coast Highway to San Francisco, and finally, shimmy back down south toward Texas by way of Palm Springs and Joshua Tree. It’s going to be a lot of driving in a little bit of time, but we agree that it’s totally feasible. We have two days to pack up a couple of bags, stock an ice chest, and make sure our car is functional and safe. I take a minute to announce to Facebook that we’ve just planned an eight-day cross-country trek in the span of three hours.

By 6  o’clock Tuesday morning, we’re on the open road, headed west toward New Mexico. I look over at Christi, who’s elected to take the first shift behind the wheel, and I know that what we’re doing is right and good. We sneak through the sleepy secret towns of West Texas, take turns climbing into the backseat to make sandwiches, and count windmills and cows and yucca as the hours roll by. I let my head fall into my back and look up at the crackly mountains of the Chihuahuan Desert near El Paso, falling in and out of sleep as we leave the Trans-Pecos region of Texas, only to realize I’m not dreaming.

The bookstore in Old Mesilla. Photo by Christine Garza.

After posting up at a La Quinta for the night, we decide there’s just enough time and sun left in the day to head out into town to explore. Yelp reveals a small village nearby called Old Mesilla, which, as it turns out, was a major stopping point between San Antonio and San Diego in the 1800s. We need an adult beverage and food in a desperate way, so we drive a couple of miles toward Mesilla and stop into an old bookstore, hoping to meet a local for some dinner suggestions. The proprietor is a tall, soft-spoken woman. She’s easy to talk to and spent some time in San Antonio, conversationally recalling a time she was knifed outside the Bonham in the mid-’80s. I’m a photo-opportunist and practically chased this woman around her bookstore trying to get a picture with her, but she sends us on our way and wishes us safe travels.

The next morning we head out on the 10-hour drive to Las Vegas. We have a lot of time to ponder life, misread billboards, and stop by an airplane graveyard just south of Tucson. At one point I mistake an adobe rest stop for a quaint small town and try to snap a picture. The most climactic part of this stretch is the billboards advertising, “The Mystery of the Desert”–more colloquially known as “The Thing.” The billboards – 247 of them in total – start around El Paso and extend to Dragoon, a small town just off the interstate in Arizona. Roadtrippers are lured into a museum that also offers a souvenir shop, gas station, and restaurant. For $2 per person, you’re granted admission to the museum and told to follow the yellow arrows toward the end of the exhibit, where you’ll find a large box that holds The Thing. It’s up to you to look inside and determine what it really is. This museum is exactly what I wanted from this roadtrip. It recalls something that a family in the 1950s would’ve done on a station-wagon trek to the Grand Canyon.

Arriving in Las Vegas an hour behind schedule, we know there isn’t much time left to do anything but eat, drink, and gamble. But, really, is there anything else to do in Vegas? Luckily, I’d racked up some points on a gambling app I’d recently become addicted to (My Vegas Slots, anyone?), so we were able to score a super-discounted rate at the MGM Grand. Unluckily, their booking system was completely down when we walked into the lobby, so we proceed to wait in line while they check everyone in the good old-fashioned way–with pen and paper. Tired, hungry, and completely ready for a drink, I decide to saunter over to the VIP check-in line and act like a high-roller. I brush the hair off my face, put my sunglasses on, and present my ID. Either the receptionist feels completely sorry for everyone in line, or I actually convince them that I am, in fact, a Very Important Person. Either way, they check us right in, and we’re even given free tickets to a show with complimentary drink vouchers for all our time and trouble. The moral of the story in Vegas: Act like you own the place!

We’re super-excited for the next leg of the trip because neither of us has been to Los Angeles before, and we’ve even splurged a little bit on our two-night hotel stay. By splurge, I mean we agreed to pay more than $100 per night, which is to be expected for a decent place in LA. And we were surprised by how much hotel we got for the reasonable price. Centered in the heart of West Hollywood, the San Vicente Bungalows boast a cluster of cottages hidden behind a high wall of greenery. There’s a calm, minimalist aesthetic to the rooms, all of which surround the heated pool and breakfast nook, where they serve free pastries and strong coffee every morning. We’re less than a block off Santa Monica Boulevard and within walking distance of some of the most popular gay bars in LA. After a semi-pricey dinner (I’m still acting like a Vegas high-roller), we stroll over to The Abbey for a drink. Within an hour, I’m elbowing my way into a crowd to take a selfie with LeAnn Rimes as she celebrates a friend’s birthday with her husband, Eddie Cibrian, and their entire Hollywood entourage. I seriously start to regret not having a camera crew of my own to document all these moments for my nonexistent reality show.

The San Vicente Bungalows in LA. Photo by Christine Garza.

Still on a Hollywood high, we spend the next day being tourists, complete with a celebrity home tour, a visit to the Hollywood sign, and a quick ride through Beverly Hills and Rodeo Drive. We end the day with a drive out to Santa Monica Pier, where we play in the ocean, take pictures with the ferris-wheel backdrop, and write our names in the sand–basically all the things you have to do when you visit this beach. It’s evening and we know our brief visit to LA is about to come to a close, so we head back to the Bungalows to relax in the heated pool and have a glass of wine.

Driving into San Francisco, the weather is exactly what we need–cool, breezy, and cloudy. Knowing that we want to spend most of our time in the Castro, we pull up to Beck’s Motor Lodge, a recently renovated motel near the fork in the road where Market meets Castro. Pride flags fly high, and the city streets are alive with diversity. We spend the next day traversing the windy and steep streets of San Francisco, shopping near the Haight, and challenging ourselves to the drive down the infamously curvy Lombard Street. If you’ve never been to San Francisco, go now. That evening, we head over to a neighborhood lesbian bar called The Lexington Club, known by the locals at “The Lex,” at 19th Street on the corner of Lexington between Mission & Valencia. Everyone is stylish in an unassuming way, completely unpretentious and welcoming. The bar has since closed due to rising rents, another casualty in the overwhelming gentrification of many San Francisco neighborhoods. When we hear the news, we’re thankful we got to spend at least one night at such a special and historic place.

On the town in SF. Photo courtesy Christine Garza.

The next day, we’re headed to Palm Springs, where we’re staying in a place called Vista Ventana Spa & Resort. It’s a $50 investment from Groupon, advertising a location in Desert Hot Springs, just a quick 10-minute drive from Palm Springs. But when we pull up, we see no vista, very few ventanas, and we think maybe the resort and spa is the little pool we see tucked in the corner. Still, the place is clean(ish), quiet, and very close to Palm Springs. We spend the evening taking in Palm Springs’ quaint shopping district, delicious seafood, and even consider gambling a bit more.

In the morning, we make the 40-minute drive to the penultimate destination on our road trip–Joshua Tree, which has always occupied a mythical space in my mind, thanks to U2. Situated on State Route 62 in San Bernardino County, Joshua Tree National Park covers a land area of 790,636 acres and is named for the Joshua trees native to the park–trees that appear to be reaching up to the sky in prayer. As we enter the gates, we’re overwhelmed with awe at the magnitude of options for hikes, walks, camping, and pure exploration. If you believe in a higher power, you’ll feel it there. If not, you’ll still feel something bigger than you as you’re swallowed by the park’s vast open sky and large, bare boulders.

It’s the perfect ending to our summer road trip. I breathe in the smell of sand and close my eyes. A quiet moment of peace and gratitude spills over me, and I realize that as much as I needed to escape, I’m ready to find my way home now.

If you have a stomachache, you don’t wait until you have an ulcer to go to the doctor A few...