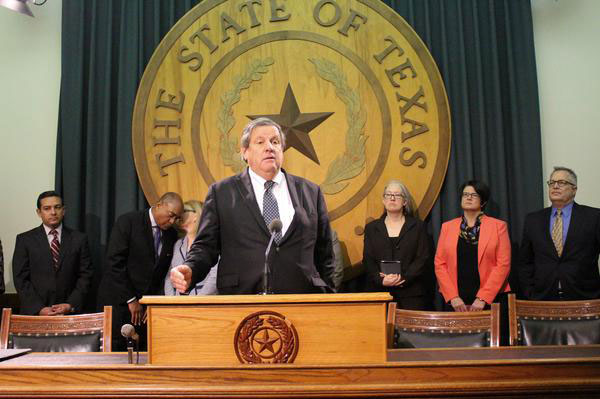 Bill Hammond, the CEO of the Texas Association of Business spoke out at a press conference on April 7 against anti-LGBT bills being considered in the Texas Legislature, saying they were bad for business. The TAB will be honored with the Equality Texas Vanguard Award on May 17 in San Antonio. (Courtesy photo)

Equality Texas announced on April 9 that they will present the Texas Association of Business with the Vanguard Award which is given annually to an “exemplary business who has demonstrated a commitment to LGBT equality in the state of Texas through fair employee policy and community advocacy.”

The award will be presented at the Spirit of Texas Brunch in San Antonio on May 17.

The Equality Texas announcement comes on the heels of the TAB’s media conference on April 7 during which their CEO Bill Hammond denounced anti-LGBT bills being considered in the Texas Legislature which he says would open the door to discrimination and an economic backlash against the state.

Hammond, who is a Republican, said, “These amendments are bad for business. They would devastate economic development, tourism and the convention business.” He was joined at the press conference by Democratic legislators and Chuck Smith, the executive director of Equality Texas.

“I think given what’s transpired in Indiana, many people have wakened to the problems that would result from this misguided legislation,” Hammond added. “Obviously, the Indiana legislature is trying to react to it and make up, but so much damage has been done to that state.”

According to their web site, the TAB is “Texas’ leading employer organization. Representing companies from the largest multi-national corporations to small businesses in nearly every community of our state, TAB works to improve the Texas business climate and to help make our state’s economy the strongest in the world.”

In its announcement, Equality Texas congratulated Hammond’s organization saying, “TAB has taken a strong stand against ‘license to discriminate” legislation that would harm LGBT Texans and Texas’ reputation as friendly to business and top talent.”

Equality Texas Spirit of Texas Brunch, Sunday, May 17 at 11:30 a.m. at the Pearl Stable, 307 Pearl Parkway. Tickets available at SpiritOfTexasBrunch.org.

Queer on the range, in Amor sin fronteras

On view until May 31 at San Angel Folk Art Gallery is Amor sin fronteras: The works of Felix D’Eon,...