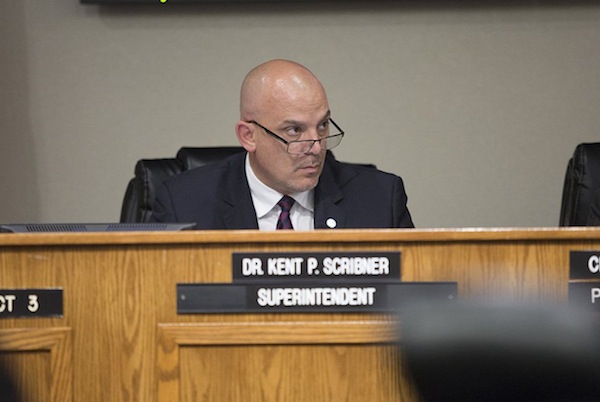 Fort Worth ISD Superintendent Kent Scribner listens to speakers at a school board meeting on Tuesday, May 10, 2016. (Photo: Laura Buckman)

Attorney General Ken Paxton sent a letter to Fort Worth ISD Superintendent Kent Scribner on Thursday evening demanding he hand over a copy of the district’s controversial sixth-grade human sexuality curriculum, which includes lessons about gender identity and sexual orientation.

Paxton claimed in the letter that district officials were repeatedly denying parents access to the curriculum or textbooks, which he said are in use in 22 schools across the district. He said children who asked to take their textbooks home or take a photo of the curriculum were denied.

Paxton cited state and federal laws that give parents access to “all written records of a school district concerning the parent’s child” and “the right to inspect and review the education records of their children.”

Stand for Fort Worth, a parental rights group whose members are opposed to having their children learn about gender identity, has been calling on Fort Worth ISD officials to hand over the textbooks and curriculum for months, arguing the district should have asked parents’ permission before moving forward with the curriculum, according to the Star-Telegram.

The group argued that although parents were sent a notice allowing them to opt their children out of the course, the notice was not clear about the content.

Members of the group cheered Paxton’s letter on Facebook Thursday night, though they did not immediately respond to a request for comment. “Given the rash of inappropriate behavior by some teachers and the garbage being taught by others, it’s imperative that parents remain vigilant and guard against their kids being indoctrinated!” one person wrote.

Fort Worth ISD officials also did not return a request for comment Thursday. State curriculum standards do not require sixth-graders to learn about sexual orientation or gender identity, but districts are allowed to add material at their discretion.

This isn’t the first time Fort Worth ISD officials have crossed top state leadership on issues of sexual orientation and gender identity. In 2016, Scribner signed a policy allowing transgender students to “acknowledge the gender identity that each student consistently and uniformly asserts” and use the bathrooms and locker rooms of their choice — prompting Lt. Gov. Dan Patrick to call for his resignation, claiming the policy broke the law.

The policy also directed school employees to share information about students’ gender identity at the student’s direction. Paxton argued in a subsequent nonbinding opinion that part of the policy broke state law by limiting parental access to crucial information.

To celebrate Pride month, UTSA Special Collections was invited to install an exhibit at the San Antonio Public Library Central...