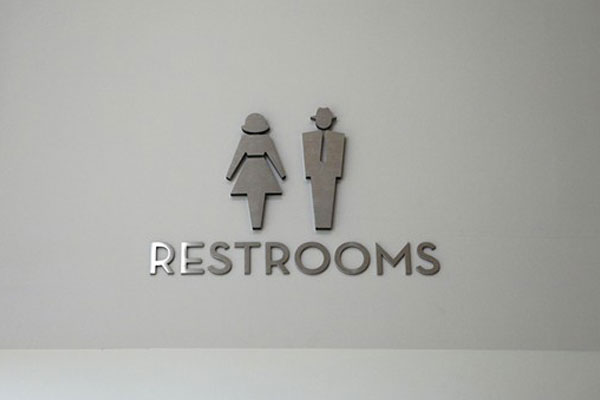 This week, trans individuals, their loved ones and members of their community showed up at the Texas state capitol to lobby and voice their opposition to Senate Bill 6, also known as the bathroom bill.

I tried my best to watch a live stream of the bill’s hearing, which took place before the Senate State Affairs Committee, as I got ready for work and had it playing in the background throughout my workday Tuesday. But eventually, I became so disheartened and insulted by some the witnesses who voiced support for the bill that I had to turn it off and walk away from my desk. A pastor talked about biology and what he referred to as the “foolishness” of distinguishing sex from gender. A radical feminist talked about the “trans mafia” and keeping penises out of women’s spaces. A school district employee talked about how unfeasible it would be to fund and build bathrooms and changing facilities to accommodate trans students as he asserted that trans kids should just get used to using the bathroom in the nurse’s office if they want privacy.

For the most part, SB6 proponents placed an emphasis on protecting women and children from opportunists who will supposedly use trans politics as a guise to enter women’s spaces to commit wrongdoing. More than one of the senators who strongly support SB6 openly admitted during the hearing that this bill was not drafted in direct response to an epidemic of men pretending to be trans to enter bathrooms, nor has the bill been drafted because trans people have suddenly gone rampant, attacking women and children in gendered spaces.

This is obviously because to date there haven’t been any verified reports of a transgender person attacking anyone in a public bathroom. In fact, according to Jody L. Herman, who conducted a study on trans people and their access to public bathrooms for the UCLA School of Law’s Williams Institute, of the trans people surveyed for the study, “about 70 percent of the sample reported experiencing being denied access to restrooms, being harassed while using restrooms and even experiencing some forms of physical assault.”

In other words, trans people are the ones at greater risk in public bathrooms. Instead of acting as a necessary piece of legislation, this bill is an unprovoked precaution, an unnecessary safeguard intended to prevent attacks by alleged predators who might pretend to be trans to do bad perverted stuff, as if a predator can just put on some lipstick and start molesting people left and right. As a trans woman and a survivor of sexual assault, I am insulted at the mere suggestion that my public existence will somehow embolden someone to use my gender identity to attack women and children.

Instead of being a response to any actual problem women and children face (like domestic violence, abuse and neglect, loss of healthcare, etc.), this bill creates the illusion of a problem to distract from crucial life-threatening issues, ones that many of these conservative lawmakers have flat out ignored or have used legislation to exacerbate these problems.

This entire conversation of who can or cannot go into whichever bathroom is a non-issue because there is zero evidence that indicates allowing trans people into bathrooms that align with their gender leads to an increase in sexual and physical assaults. That in itself should be enough to squash this bill. But alas, more than 400 members of the trans community and our allies have taken valuable time out of their lives to show up at the capitol to testify and essentially beg the Texas Legislature to just drop it.

Other SB6 supporters stated this bill is about privacy, specifically about allowing women and children the right to privacy. However, more than one panel witness made the claim that creating gender-neutral or transgender-accommodating facilities would be far too costly. So I ask, what about the privacy of trans youth? That’s who this bill is targeting, intentionally or not. Do they not deserve to be accommodated? Are they not allowed privacy and safety?

This isn’t about bathrooms, and it most certainly isn’t about privacy. It is about keeping transgender people out of the public eye and forcing us back in the closet, despite the risks we already face living trans publicly. Conservative legislators created a transphobic caricature of a trans predator to demonize trans people, trans women in particular, as a scare tactic in order to gain public support for SB6. And now our trans community, especially our trans youths, are going to pay the price.

So here I am, an actual living breathing transgender woman, trying to exist and survive without giving a second thought to where I’m going to pee next, but now, I am at risk of losing the most basic of liberties simply because a group of legislators and anti-trans supporters don’t understand, fear and even hate trans people, or “transgenders” as many of the state senators and SB6 proponents wrongfully said throughout the hearing in reference to us. (Seriously, do we really want people making public policy who don’t know the different between a noun and an adjective?)

Transgender people already experience so much violence; in fact, we saw an all-time high in reported killings of trans people in the United States in 2015, and the numbers continued to rise in 2016, which saw at least 26 trans deaths. SB6 will serve only to further stigmatize an already violently targeted group, so I have to ask: where is the political outcry for our wounded community?

Sen. Donna Campbell defended SB6 during the hearing, stating that the prospect of even one attack is too much risk, so preventative measures must be taken. This year, we’ve already seen seven transgender women of color murdered, and they’re only the individuals who we are able to identify as trans (many media outlets still misgender a trans person in death). If one is too much, where is the proposed legislation to keep transgender women and children safe?

The arguments in favor of SB6 border on pure fabrication, and fact after fact presented to argue passionately against it suggests that transphobia, not trans people, is at the root of this issue. We as a society and as a state need to address how transphobia and how transmisogyny create a culture of violence towards the transgender community, not create and instate policy that further harms our way of life.

The songs of Carole King have been recorded by artists across every genre from pop princess Mandy Moore to Queen...