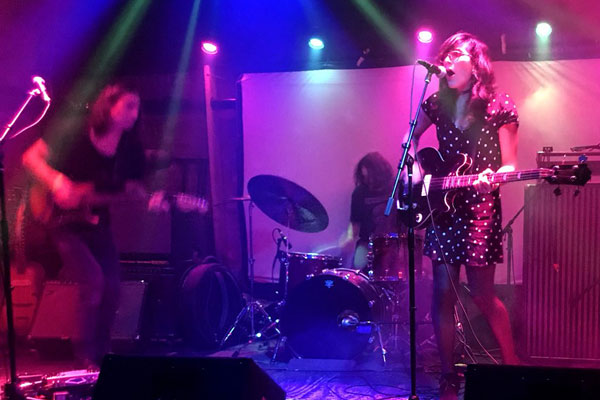 Shay Spence, the front-woman for the rock band Vassals, will be in San Antonio on May 31 to promote her first solo album. (Photos via Facebook)

Shay Spence, front-woman and bassist for the NYC slacker rock band Vassals, will perform in San Antonio on May 31 at Lowcountry as part of the “Tiny Texas Tour,” promoting her first solo album titled, With Fangs.

Spence will also appear in Austin at Dozen Street on May 29 and in her hometown of Corpus Christi at The NASA on June 1. Her new album is now streaming on all music platforms. You can listen to it on Bandcamp.

“One aim of my tour is to connect with other LGBTQ+ folks in other cities, especially trans and gender nonconforming artists,” Spence told Out In SA in an email. “Being myself felt utterly impossible while growing up in Corpus Christi, and I take so much pride in being a strong representation of an out trans woman in music.”

In an article on the music website The Deli, Spence’s band, Vassals, is described as a “fully modern indie rock outfit. Their quiet-loud dynamic shifts and hazy, atmospheric guitars are enough to evoke indie and psych classics like The Pixies and Jefferson Airplane, without ever borrowing so much as to sound outdated.” 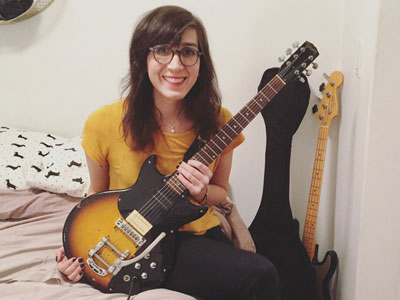 Spence says that for her solo album she’s ditching the “signature fuzz bass” she employs when performing with the “noisy slacker band Vassals” in favor of a “softly-plucked electric to recreate the soft warmth of her EP.” However, she says the “manic fervor” of Vassals’ rock riffs still bubble up in moments during her more intimate live set.

In a bio included with her concert info, Spence writes:

“She previously lived in South Texas, Boston and Los Angeles, where she was a sad kid, a college drop out and a warehouse ghost, respectively. She mostly writes about her dog and the moon. She is trans, queer and, most importantly, left-handed.”

Spence’s return to her home state to perform in three “personally meaningful Texas cities” appears to be something of a victory lap. On the Facebook event page for her San Antonio appearance, she says she’s ready for a homecoming: “We can drink and dance and catch up, because God, it’s been some time since I’ve been around.”

Originally published in the San Antonio Current. Growing up gay, lesbian, bisexual, transgender or queer in the United States comes...