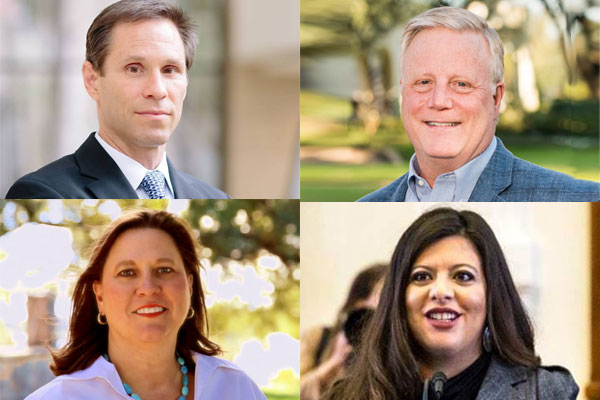 Following is the list of Texas Equity PAC’s endorsements.

Nathan Johnson – Candidate Texas Senate District 16
In a statement after the announcement of Texas Equity PAC’s endorsement, Johnson said, “We want all Texans to participate in and contribute to our economy, and to our cultural richness. Yet the Texas Legislature has repeatedly rejected attempts to pass legislation that would bar discrimination based on sexual orientation or gender identity or expression; and Texas’s equal pay laws are among the weakest in the nation.”

Johnson is a Dallas attorney and a partner in the firm Spector & Johns PLLC. His civic activities include having provided pro-bono legal counsel for the Human Rights Initiative of North Texas, coaching soccer teams for the YMCA, tutoring with Reading Partners at neighborhood public schools, chairing the Dallas County Trails and Preserve Board, and serving on boards spanning education, the arts, and public policy.

Mark Phariss – Candidate Texas Senate District 8
“As a longtime member of Equality Texas, I am excited to receive an endorsement from the Texas Equity PAC,” Phariss said in a statement. “If honored by the voters to be the next Texas Senator from District 8, I look forward to working with Equality Texas to build upon their historied work to protect all Texans and their families.”

Phariss became a news maker in 2013 when he and Vic Holmes, his partner at the time, along with Cleopatra DeLeon and Nicole Dimetman, a married couple from Austin, filed a federal lawsuit in San Antonio seeking a court order barring Texas officials from enforcing the state’s same-sex marriage ban.

The two couples were successful at the district court level when San Antonio Federal District Judge Orlando Garcia ruled the state’s ban was unconstitutional because it “violates plaintiffs’ equal protection and due process rights.” The ruling was stayed and the state eventually conceded the case after the U.S. Supreme Court’s 2015 ruling that same-sex marriage is protected by the Constitution.

Julie Johnson – Candidate Texas House District 115
“I’m so proud to have the endorsement of Equality Texas and I welcome them as a partner in our campaign’s mission to take back House District 115 for the people of Texas,” Johnson said. “This organization has enjoyed great success protecting Texas families, ensuring access to healthcare and protecting vulnerable youth. I pledge to honor their legacy of advocacy as we move forward together into 2018.”

Johnson is an attorney in Dallas. She is mother to two teenagers and married to Dr. Susan Moster, a gastroenterologist. According to a bio on her website, keeping up with the needs of her children is her favorite challenge.

Johnson is also a classically trained vocalist who, in her career has sung with groups ranging from church choirs to the Dallas Symphony Chorus. She says if elected, her priorities would be to create fair-minded policies for all Texas in recognition that diversity and shared values are the true strengths of any community.

Mary Gonzalez – Candidate Texas House District 75
In announcing the endorsement for her re-election, Texas Equity PAC said, “Rep. Gonzalez is a fierce advocate for equality, earning an A+ rating from Equality Texas during the 2017 Session.”

Gonzalez came out as pansexual (she is attracted to various gender identities) after being elected in 2012. In 2015, she was honored by Equality Texas with the Advocate Award which is given annually to “a public figure or figures with a steadfast reputation for supporting issues of equality for all Texans.” That same year, a transitional center for LGBT youth in El Paso was named in her honor.

In October this year, Gonzalez one of six finalists nominated for the Victory Fund’s first-ever Tammy Baldwin Breakthrough Award. “I stand with the LGBTQ community. I am grateful for this nomination, and will continue to fight for socially just policies that benefit all members of our community,” Gonzalez said at the time of the announcement.

2017 in Review: Honorable and Dishonorable Mentions