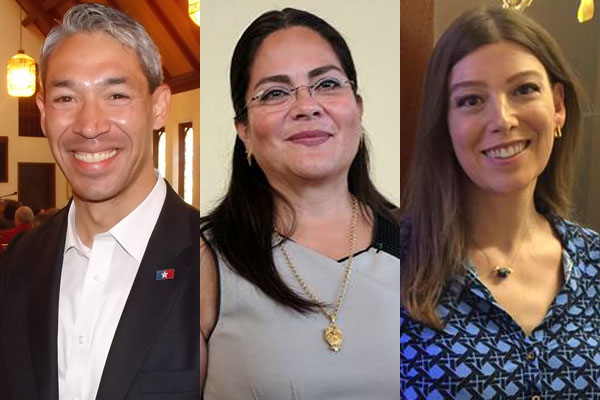 On June 21, his first day in office, he added his name to the list of Mayors Against LGBT Discrimination and ten days later was Grand Marshal of the Pride San Antonio parade.

When asked how he felt about being embraced by the LGBT community, Nirenberg told Out In SA, “It makes me feel good, because my goal has been to be a mayor for all of San Antonio. That [support] means that marginalized members of the community, people who have felt voiceless, people who are underrepresented, believe that they have a champion in the mayor’s office, and that makes me feel really good.” Two weeks before the mayoral election in May, local political activist Rosey Abuabara invited the LGBT and allied community to participate in a “gay pride flash mob dance” in Dignowity Park across the street from then-Mayor Ivy R. Taylor’s house.

Abuabara, who has a gay son and two gay brothers who died of AIDS, said the protest was meant to highlight Taylor’s vote against the nondiscrimination ordinance as a councilwoman in 2013 and her icy relationship with the city’s LGBT citizens as mayor.

Not everyone thought Abuabara’s flash mob was a good idea. Resistance came from some in the LGBT community who offered varied excuses for not endorsing the event including that her dance party would only encourage Taylor’s supporters to vote in greater numbers.

None of the naysayers were able to deter Abuabara from holding the flash mob party, which attracted 100 dancers of all ages and garnered extensive press coverage. The joyful protest turned out to be the perfect catharsis for the LGBT community who happily cheered Taylor’s defeat on election day. San Antonio architect Ashley Smith made national news in July when she posed with Texas Governor Greg Abbott at a campaign event, then posted the photo on social media with the caption, “How will the Potty Police know I‘m transgender if the Governor doesn‘t?”

The photo went viral and was surely a source of chagrin for the Republican governor.

“I wanted to show that transgender are all over the place. Some transgender don’t pass as easily as I was able to with the governor,” Smith told the Reuters news service.

Smith’s photo bomb was dropped during the Texas Legislature’s special session which Abbott convened in hopes that a bathroom bill, which restricted access to restrooms and locker rooms to transgender Texans, would be passed into law.

Smith said she posted the photo to show that “sometimes it’s not really apparent who transgender people are . . . We’re just regular folks.” During the last six months of her tenure as Mayor of San Antonio, Ivy R. Taylor continued to maintain a tense and distant relationship with the city’s LGBT community.

Last January, when nearly 200 mayors from across the country, including four from Texas, joined a coalition named Mayors Against LGBT Discrimination, Taylor refused to sign on to the list.

The former mayor’s much-touted LGBT Advisory Committee was rarely convened and when it was, Taylor set the agenda. During one meeting she was asked by a member of the committee whether the city might help support an LGBT resource center. “She told me she wouldn’t necessarily stand in the way of it,” the committee member told the San Antonio Current. “But then she said she’d still oppose spending any taxpayer money on what she called ‘a controversial issue.’”

During her campaign for a second term as mayor, Taylor went missing from all candidate forums organized by LGBT groups. Her campaign staff cited “scheduling conflicts.”

Back in 2011, when Taylor was running for City Council, she made her one and only appearance at a Stonewall Democrats’ endorsement forum. In describing her at that event, the Current reported somewhat prophetically, “Perhaps what was most surprising about the day’s discussion was that a sitting council member like Ivy Taylor would expose herself as being so uncomfortable about LGBT issues.”

That discomfort persisted through the years and went on to become Taylor’s legacy with San Antonio’s LGBT community. Last August, a letter in support of the anti-trans bathroom bill was being circulated by Texas Values, which has a long history of anti-LGBT discrimination. The letter, which included the signatures of 33 Texas business owners, stated: “We, the undersigned support legislative efforts to protect the privacy, safety and dignity of Texans in bathrooms, locker rooms, and other intimate facilities in all government buildings, including public schools.”

Two of those who signed the letter were San Antonio businessmen Patrick Von Dohlen and Michael R. Knuffke of the Von Dohlen Knuffke Financial Group. Both have ties to the anti-LGBT San Antonio Family Association.

Earlier this year, Von Dohlen ran for the San Antonio City Council District 9 seat but did not make it into the runoff. According to a bio on his website, Von Dohlen “supports several nonprofits” and is chairman of the San Antonio Family Association.

Knuffke is one of the founders of the San Antonio Family Association. “It started in 2011 when we discovered that the play ‘Corpus Christi’ was being performed that depicts Jesus as a promiscuous homosexual in the San Pedro Theater in San Antonio – on the taxpayer’s dime,” Knuffke told Empower Texans. “We were there in protest to the play and that is when we learned that our runaway city government was just that: running away. We knew immediately we had to do something. We formed the San Antonio Family Association and we have been fighting battles ever since.”

In the case of the bathroom bill, the battle was lost for Van Dohlen and Knuffke because the legislation never made it to the floor of the Texas House for a vote. A group of volunteers painted a set of rainbow crosswalks in chalk on Main and Evergreen on July 1. (Photo by Lupito Acuña Photography)

Last August, the San Antonio City Council’s Governance committee voted to approve the installation of rainbow crosswalks at the corner of North Main and East Evergreen. “We hope to have [the crosswalks] installed by the new year,” District 1 City Councilman Roberto C. Treviño told Out In SA at the time.

Even with the approval of the Governance Committee, the LGBT community had to raise $30,000 to help pay for the installation of the crosswalks — $20,00 for the community’s portion of the cost plus $10,000 for upfront costs and ongoing maintenance. A deadline of December 31 was set.

It wasn’t until late October when a Kickstarter campaign was started to help raise the funds. Little or no effort was made to publicize the effort and not one local LGBT organization or business held a fundraiser.

Despite what seems to be great enthusiasm for the crosswalks, there is also a sizable backlash that festers behind the scenes. Some in the community have complained the cost of installing the crosswalks is too high and the money could be put to better use.

On December 22, the Kickstarter campaign ended having only raised $2,700. As far as Councilman Treviño is concerned the crosswalks are a go. In an email to Out In SA he wrote, “We will not negate the deal and we are also working to help raise the dollars needed. We do have some commitments already too.”

The question remains whether the commitment to fund the rainbow crosswalks is there with the LGBT community and its leaders. If there is real enthusiasm, where are the dollars?