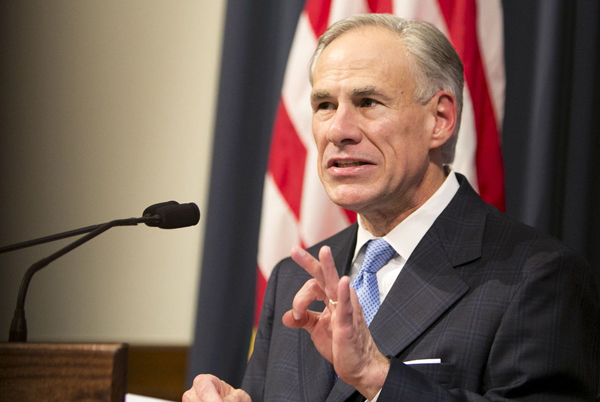 Gov. Greg Abbott lays out items for a special session at a press conference on June 6, 2017. (Photo: Marjorie Kamys Cotera for The Texas Tribune)

Gov. Greg Abbott himself was opposed to the controversial “bathroom bill” that dominated debate at the Texas Capitol for much of 2017, according to a state representative involved in keeping the legislation from passing the Texas House.

State Rep. Byron Cook, R-Corsicana, the chairman of the House State Affairs committee that blocked the bill from reaching the House floor for a full vote, said Tuesday that Abbott “did not want that bill on his desk.”

Cook’s comments on the bill, which would have restricted the use of certain public facilities for transgender Texans, came alongside the long-awaited release Tuesday of a report from the House Select Committee on Economic Competitiveness. After months of discussion, a public squabble and several hours-long hearings, most committee members came to the conclusion many had anticipated: the “bathroom bill” is bad for business.

“Future legislators should focus on [low taxes, limited regulation and local control] to maintain a predictable and reliable business climate, avoiding legislation that distracts from critical priorities and is viewed by many as enabling discrimination against certain groups or classes of Texans,” says the committee’s report. “Texas policymakers must acknowledge warnings from leaders in the business community, academicians and law enforcement officials about the consequences of such discriminatory legislation to avoid endangering the state’s successful economy.”

Two of the committee’s Republican members, state Reps. Angie Chen Button of Richardson and Charlie Geren of Fort Worth, didn’t sign the final report. Neither Abbott, Button nor Geren immediately returned a request for comment Tuesday.

Lt. Gov. Dan Patrick first unveiled a “bathroom bill” in January 2017, and for the first several months of debate, Abbott remained largely silent even as some cautioned that it would be bad for business. When an alternative form of the bill emerged in the Texas House in April, Abbott called it a “thoughtful proposal.” But he didn’t give the policy his clear support until later that spring, when he endorsed it as a legislative priority.

No bathroom bill made it to Abbott’s desk by the end of the legislative session in May — a block largely credited to Straus and Cook, who said in a hearing that “there’s no information” supporting the need for such a bill. But Abbott revived the controversial legislation in June, when he put it on his 20-item call for the summer’s month-long special session.

After that, he struck a delicate balance on the thorny issue, calling on legislators to pass all of his special session priorities but taking care not to emphasize the “bathroom bill” individually. Many observers speculated that Abbott was happy to stay out of the fight, letting Straus take the heat for keeping the bill from the floor.

Near the end of a divisive year at the Texas Legislature, House Speaker Joe Straus launched a new bipartisan committee on economic competitiveness in October and charged it with examining the factors that attract businesses to — and repel them from — Texas. He tapped Cook, a top Straus lieutenant, as the committee’s chair.

Upon announcing the new committee, Straus faced immediate pushback from his state Senate counterpart, Patrick, who said he didn’t “know what the point is” of the committee, given that Texas already has “the most pro-business climate in the country.”

Both Cook and Straus announced last year that they were not running for re-election. Their terms are set to end in January. Frank Gonzales and his family wait to testify on the “bathroom bill,” along with a crowd of witnesses, in front of the Senate State Affairs Committee on July 21, 2017. (Photo: Austin Price/Texas Tribune)

The committee’s report released Tuesday emphasizes the importance of the Legislature “avoiding unnecessary distractions such as manufactured social issues that are unreasonable, unenforceable and harmful to the economy.”

The committee was widely viewed as Straus’ attempt to push back on the conservative social agenda that Patrick — and, to a lesser extent, Abbott — championed during the 85th Legislature. But the report also alludes to the state’s, and perhaps the country’s, highest-profile economic development opportunity: the luring of Amazon’s second headquarters.

The tech giant has whittled down a list of 238 applicants to 20 finalists, including the Austin and Dallas metro areas. But many experts have cautioned that Texas’ conservative social policies — chief among them an anti-“sanctuary city” measure currently winding its way through the federal court system and repeated efforts to pass a bathroom bill — could deter Amazon, which like many tech companies touts its diverse and accepting climate. Amazon was one of dozens of businesses last summer to sign onto a letter cautioning Texas leadership against passing the bathroom bill.

Straus presented wooing Amazon as an opportunity to recoup some of the state’s losses from August’s devastating Hurricane Harvey.

“A major corporation has proposed a nationwide search for the location of a second headquarters, offering economic benefits equal to the losses caused by Harvey’s damage,” Straus said. “Both [Harvey and Amazon] illustrate the importance of making sure that Texas continues to welcome and foster private-sector growth.”

Some of the report’s recommendations seem geared directly toward attracting large businesses like Amazon. The committee emphasized that incentives should be applied “consistently across the state,” noting that North Texas — which in 2014 attracted Toyota’s new headquarters to Plano — has drawn most of the awards from the Texas Enterprise Fund, a $230 million pot the governor can draw from to incentivize companies to locate in Texas. Dallas has traditionally been more generous than Austin in offering financial incentives to recruit businesses. And, the committee said, there should be greater oversight on how and when these incentives are offered — and whether they are ultimately successful.

The report also strikes at many of the other most divisive issues of last year’s session, including public education and property taxes. Increasing the state’s share of public education will lower the burden of local property taxpayers and better position Texas students for workforce success, the report argues, as will investing further in community colleges and state technical colleges. The committee also advocates for improving infrastructure failures spotlighted by last year’s hurricane.

“The devastating effects of Hurricane Harvey provide a rare opportunity to combine state and federal funding to make critical investments in flood control and mitigation projects that will reduce the impact of future storms,” the report concludes.

The committee’s nonbinding recommendations are offered to the 86th Legislature, which convenes in January 2019.

A Bungled Strategy in the Case of Kenne McFadden’s Death

San Antonio's transgender community is angered and bewildered at how the man who admitted to pushing a local trans woman...