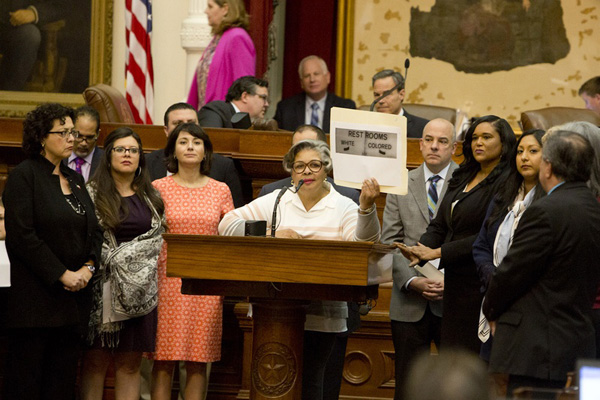 During a debate on the "bathroom bill," state Rep. Senfronia Thompson, D-Houston, holds up a photo of a sign that reads, "RESTROOMS WHITE COLORED," on May 21, 2017. (Photo: Marjorie Kamys Cotera for The Texas Tribune)

Amid threats of a special legislative session over the “bathroom bill,” the Texas House on Sunday took a last-minute vote to approve a proposal that would keep transgender students from using school bathrooms that match their gender identity.

The House voted 91-50 to amend  Senate Bill 2078 — which focuses on school districts’ “multihazard emergency operations plans” — to add bathroom restrictions that some Republicans had pushed for since the beginning of the legislative session.

Throughout the tense floor debate, Republicans insisted the legislation was not meant to target transgender students, while Democrats likened the proposal to Jim Crow-era policies that segregated bathroom use based on race. Under the proposal, a transgender student who “does not wish” to use a facility based on “biological sex” would instead use single-stall restrooms, locker rooms and changing facilities at their school.

“White. Colored. I was living through that era … bathrooms divided us then, and it divides us now,” Democratic state Rep. Senfronia Thompson of Houston, a black woman, told her colleagues. “America has long recognized that separate but equal is not equal at all.”

Republican state Rep. Chris Paddie of Marshall argued that his amendment language did not discriminate “against anyone” and would provide “definitive guidance” to school districts,

But the adopted amendment could override existing trans-inclusive policies at some school districts that allow transgender children to use the bathroom of their choice.

“If they are biologically considered to be a female, they must use that [facility],” Paddie said in laying out this amendment. “Otherwise, there will be accommodations made for them to use a single-occupancy facility.”

Heading into the final stretch of the legislative session, and with Lt. Gov. Dan Patrick threatening to push for a special session if the bathroom bill doesn’t pass, House members narrowed the approach that senators have been championing through Senate Bill 6 — the “bathroom bill” from state Sen. Lois Kolkhorst, R-Brenham.

SB 6 would have required transgender Texans to use bathrooms in government buildings and public schools that match their “biological sex.” The measure would have also prohibited local governments from adopting or enforcing local bathroom regulations.

The House chose to focus only on schools, and attached the measure onto SB 2078, which addresses  school districts’ emergency response plans in cases of natural disasters, active shooters and other “dangerous scenarios.”

Until now, House leadership had been reluctant to act on bathroom-related legislation over concerns of economic fallout. House Speaker Joe Straus, who has said the bathroom legislation felt “manufactured and unnecessary,” bottled up SB 6 by refusing to refer it to a committee — an early step in the legislative process. A House bill that addressed the issue also stalled.

But the bathroom legislation became the final sticking point in efforts to avoid a special session, pushing Republicans in the House to turn to a compromise on regulating only school policies — a narrower measure than both of the original proposals for bathroom regulations.

While only the governor can actually call a special session, Patrick had warned he was willing to hold hostage a measure known as the “sunset safety net bill,” a must-pass measure to keep certain state agencies from shutting down. All state agencies must undergo periodic “sunset” reviews, but they’re often added to the safety net bill if lawmakers fail to reauthorize them in time. Record vote of amendment to restrict school bathroom use for transgender students. (Photo: Alexa Ura for the Texas Tribune)

But Straus on Sunday said the governor made clear “he would demand action on this in a special session, and the House decided to dispose of the issue in this way.”

After Sunday’s vote, Straus suggested in a statement that the amendment would not drastically alter the way in which schools have handled “sensitive issues,” and would help the state “avoid the severely negative impact of Senate Bill 6.”

“Members of the House wanted to act on this issue and my philosophy as Speaker has never been to force my will on the body,” Straus said of the vote despite his opposition to bathroom-related legislation.

Both the House and Senate proposals drew support from religious leaders and social conservatives, but they immediately led to outcries from civil rights groups and local officials concerned about discrimination toward transgender Texans. Business groups, chambers of commerce, big investors, sports leagues and tourism groups campaigned against the measures, saying they were discriminatory and risked hurting the state’s economy.

By focusing on schools, Republicans could presumably thwart some of those concerns by letting stand local nondiscrimination ordinances — some on the books for decades in the state’s biggest cities — that are meant to allow transgender residents to use public bathrooms that match their gender identity.

But the measure adopted by the House could lead to serious repercussions for students who have already received special accommodations at their schools. Some Texas school districts allow transgender students to use the bathroom that matches their gender identity through formal policies or on a case-by-case basis.

Despite the whittled-down version that was ultimately voted on, Democrats refused to characterize the legislation in any other way but a “bathroom bill.”

“Let’s be honest and clear here: This amendment is the bathroom bill, and the bathroom bill is an attack on transgender people,” said state Rep. Joe Moody, D-El Paso. “Some people don’t want to admit that. Maybe that’s because they’re ashamed, but make no mistake about it — this is shameful.”

The legislation with the bathroom amendment must still receive final approval by the House, which could come as soon as Monday. The Senate would then have to approve the amendment when the bill makes it back to that chamber before sending it to the governor’s desk.

The bathroom measure has already picked up an endorsement from Texas Association of School Boards.

“The House has approved language intended to be a common-sense solution regarding the use of restrooms and other facilities in public schools,” Grover Campbell, the group’s director of governmental relations, said in a statement. “The language captures in law a solution many districts already use locally, seeking a balance between ensuring privacy and security for all students and respecting the dignity of all students.”

But LGBT advocates reiterated their fierce opposition to any sort of bathroom restrictions for transgender people.

“This shameful amendment is yet another example of Texas lawmakers’ anti-LGBTQ agenda,” said JoDee Winterhof, the Human Rights Campaign’s senior vice president for policy and political affairs. “Transgender youth deserve the same dignity and respect as their peers, and this craven attempt to use children as a pawn for cheap political points is disturbing and unconscionable.”

It’s also likely that lawmakers are setting up a legal challenge. In a statement released Sunday before of the House vote, Jennifer Pizer of Lambda Legal said the LGBT legal advocacy group would “be on the case before the next school bell rings” if Texas lawmakers “forced discrimination into Texas law.”

Nirenberg Says LGBTs Deserve a City That Treats Them With Respect

Speaking to a group of LGBT supporters at a fundraiser on May 21, mayoral candidate Ron Nirenberg said that San...