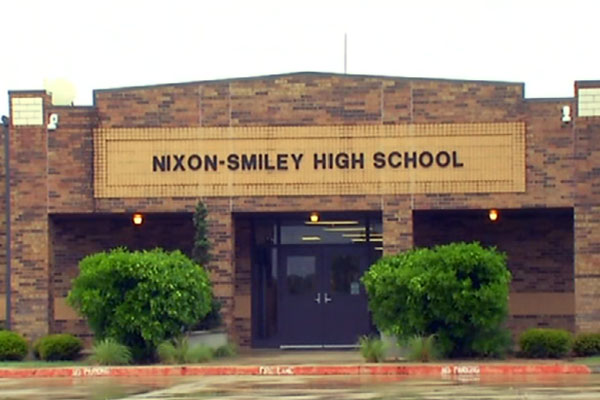 The father of a high school student in Nixon, Texas, says his son is being bullied after his teacher falsely told the student’s classmates that the student is gay and uses his girlfriend to cover it up, WOAI-TV is reporting.

The father says his son is not gay. The boy attends Nixon-Smiley High School which is about 60 miles southeast of San Antonio.

“Gay or straight is not the problem here,” the father told WOAI. “The problem is the teacher making a comment causing bullying in a school.” He said he was making his grievance public because he did not want the incident “swept under the rug.”

The father, who was not named in the WOAI report, says he wants the teacher to be fired. “She’s apologized but I didn’t want an apology. What’s done is done so there’s nothing she can take back.”

The teacher’s comment was prompted because of his son’s appearance, the father says. “She assumed it because of the way he looks. He’s a well-mannered kid, takes care of himself.”

Even though his son is not gay, the father’s concerns about bullying are real. LGBT teens and those perceived to be LGBT are nearly nearly twice as likely to be called names, verbally harassed or physically assaulted at school.

A spokesperson for the Nixon-Smiley Consolidated Independent School District issued a brief statement saying, “We are aware of the allegations currently under investigation as the student’s parent goes through a grievance process.”

In making his case, the father says the teacher should have known better. “She expects those kids to carry themselves a certain way. Shouldn’t she carry herself a certain way?”

San Antonio Mayor Ron Nirenberg will be a special guest at a town hall on October 30 that will feature...