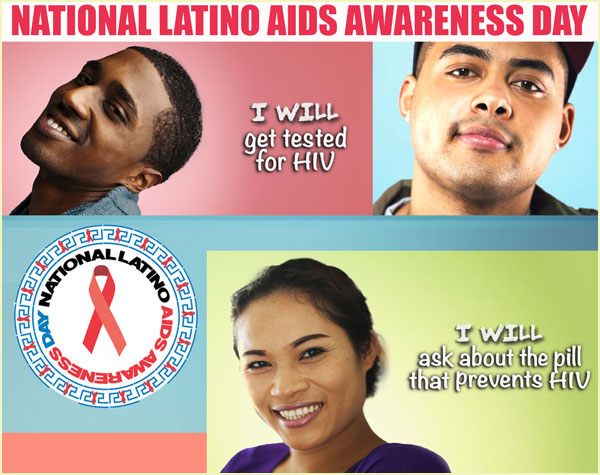 The observance of National Latino AIDS Awareness Day on October 15 is reminder that while Hispanics represent 16 percent of the population, they account for 21 percent of new HIV infections in the US. In San Antonio, where the Hispanic population is about 63 percent, the effort to raise awareness is especially important.

The theme of this year’s Awareness Day observance is “You and I will defeat AIDS.” (Tu y yo vamos a derrotar al SIDA). Organizers say the slogan emphasizes “the importance of defeating AIDS by talking about HIV, getting tested, asking about the pill that prevents HIV (PrEP), and by maintaining medical care and treatment if infected.”

Activists and HIV health providers says there are a number of obstacles which make reaching the Hispanic community difficult. Many in this demographic have no health insurance and therefore aren’t under the regular care of a physician.

There are also cultural barriers especially for gay and bisexual Hispanic men who often don’t come out to their families and friends and who consequently may be reluctant to get tested or treated for HIV.

Locally, HIV infection among all demographics is high.

Bexar County saw an 11 percent increase in HIV infections from 2012 to 2013, according to statistics from the city’s MetroHealth Department. The number of those infected rose 62 percent since 2006. The rate of infection in Bexar County is almost triple the rest of the state with almost 80 percent of those cases among young gay and bisexual men.

When you consider San Antonio’s Hispanic majority, the need for prevention and awareness becomes all the more urgent.

“. . . among Latinos in the United States who have been diagnosed with HIV, just over half were retained in medical care. Also, less than half are receiving anti-HIV drugs. As a result, only slightly more than one-third have their HIV infection under control. Having HIV under control means that HIV infection is suppressed to a level where one can stay healthy and active, while greatly reducing the risk of passing the virus to others . . . We need to find and correct the problems that are keeping too many Hispanic/Latino men and women with HIV out of treatment. The burden of HIV among Latinos is a complex issue, with no simple remedy . . . National Latino AIDS Awareness Day is an important reminder, and this year I call for us to re-double our efforts to improve the health of Latinos in the United States.

Two local agencies will observe National Latino AIDS Awareness Day with events in a festive setting where attendees can get information and free HIV testing.

Project H.O.T. (HIV Outreach & Testing) is organizing a Drag Loteria Festival where local drag queens will perform and host Mexican bingo games. There will be booths for local artisans and LGBT organizations as well as free food and free HIV testing. The event is set for October 15 from 8 to 11 p.m. at the Brick at Blue Star, 108 Blue Star.

The San Antonio AIDS Foundation will observe National Latino AIDS Awareness Day on October 17 with an outdoor event from 9 a.m. to 1 p.m. at Woodlawn Lake Park, 1103 Cincinnati Avenue. There will be activities, health screening, information booths and free flu shots for the first 150 people who qualify.

Gene: Ann, Michael have a seat on the sofa. Thanks for joining me and millions of others around the world. Michael,...