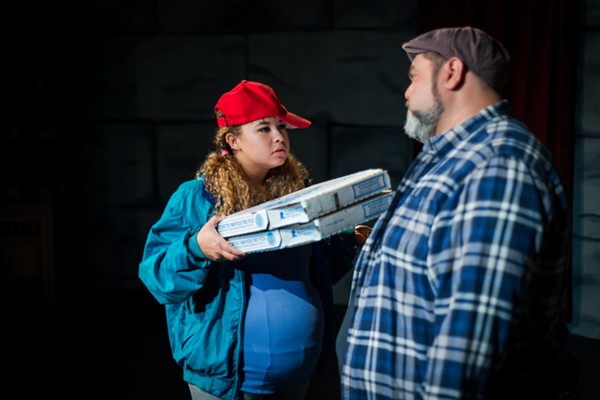 While it champions Texas-bred productions, the wild and wacky Overtime Theater also stages offbeat works concocted by like-minded playwrights from across the nation.

Given his track record fusing Goth culture, Netflix fandom and David Attenborough-inspired nature docs (Among the Squirrels), not to mention setting a Greek myth in a 1950s-era Arizona diner (Iphigenia in Kingman), it’s safe to say Wisconsin-based gay playwright Eric Appleton is a promising fit for San Antonio’s “theater for the people.”

Set in in his home state, Appleton’s new offering Ghostbears follows Ted Meriwether, a “burly, bearded” guy who ditches his condo and buys an old house in the middle of “rural nowhere” after getting dumped by his longtime boyfriend. Beyond the distractions of a pregnant pizza delivery girl and a potential new bear boyfriend, Meriwether’s newfound country life gets disrupted when paranormal investigators barge into his purportedly haunted house in search of an axe-wielding ghost and a “devil baby.”

This month, Dignity San Antonio observes its 40th anniversary of providing a safe space for LGBT Catholics to reconcile, heal...