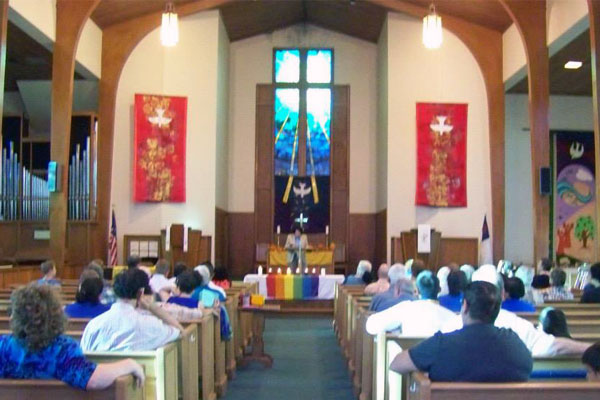 This month, Dignity San Antonio observes its 40th anniversary of providing a safe space for LGBT Catholics to reconcile, heal and integrate their sexuality with their spirituality.

Dignity’s story is one of a congregation in exile. In its four-decade history, the group has worshipped in several Catholic churches only to be asked later to leave because of the church leadership’s conflict with the group’s sexual orientation and gender identity.

Undeterred by rejection, Dignity SA has worshipped in meeting halls, the homes of members and in the sanctuaries of Protestant churches which have welcomed the group.

According to a historical essay provided to Out In SA, Dignity started in San Antonio by a small group of LGBT Catholics “who had a deep desire to stay connected to their spiritual roots in light of their sexuality.” Early organizers include Bruce Jarstfer, Nickie Valdez, Larry Cooper, Molly Hoff, Jim Cottone, Chris Broadhurst, Vickie Aldeman, Sr. Leona, and Charles Baldwin.

A congregation of LGBT Catholics

In 1975, the group began the process of becoming an official chapter of Dignity USA and was formally chartered in 1976. In its early years, Dignity worshipped at the International Student Center of St. Philips College and at the Catholic Student Center at San Antonio College. The Dignity chapter threw itself into St. Patrick’s parish life, helping paint the sacristy, repairing the church’s marquee and providing donations to the lunch program for the elderly. However, some parishioners were not happy with the church’s association with Dignity.

“We began experiencing the pressures and discrimination of being LGBT and Catholic/spiritual. On coming out of liturgy, many Sundays we would find that air had been let out of our  tires, lug nuts were removed, mud balls were thrown at us, and slurs were written on our cars,” Dignity’s historical essay explains.

After St. Patrick’s pastor was reassigned, the new pastor asked the group to leave. The final worship service for Dignity at St. Patrick’s was on Easter Sunday in 1982 with over 200 LGBT community members coming to show their support.

From St. Patrick’s, Dignity went on to St. Francesco De Paola and St. Mary’s Downtown but those churches eventually turned them away as well.

On October 31, 1986, the Catholic Church’s Congregation for the Doctrine of the Faith issued a letter by then-Cardinal Joseph Ratzinger titled, “Letter to the Bishops of the Catholic Church on the Pastoral Care of Homosexual Persons.”

“The Church, obedient to the Lord who founded her and gave to her the sacramental life, celebrates the divine plan of the loving and live-giving union of men and women in the sacrament of marriage. It is only in the marital relationship that the use of the sexual faculty can be morally good. A person engaging in homosexual behavior therefore acts immorally,” Ratzinger wrote.

As a result of the letter, Dignity chapters all over the country were asked to leave Catholic Church property and fewer priests were willing to minister to the group for fear of reprisal from church officials.

“We did feel abandoned by the church during this period but at the same time we felt empowered in our ability to be honest and open about who we are, our belief in our own goodness and the responsibility we were taking for our own spiritual growth and development,” Dignity SA leaders say in their historical essay. In 1993, Dignity SA found a home at St. Ann’s Catholic Church where it remained until October 2010 when then-San Antonio Auxiliary Bishop Oscar Cantu ordered the church to stop hosting a weekly Mass for the chapter. Fred Anthony Garza, then-president of Dignity said, “Our community was shocked to arrive for Mass and discover this was the last time we could meet at the parish that has been our home for more than 15 years.”

“The Mass at St. Ann’s Church for members of the homosexual advocacy group, Dignity, continues to send conflicting messages about the Church’s official teaching concerning the proper celebration of the Eucharist and living an active homosexual lifestyle,” Cantu wrote in a letter to St. Ann’s pastor, Father John Restrepo.

One week after their expulsion from St. Ann’s, Dignity began worshipping at Beacon Hill Presbyterian Church. However, in October of last year, Beacon Hill closed its doors due to the retirement of its pastor, an aging population and financial difficulties.

Looking back over its 40 years, the leaders of Dignity San Antonio recall the trials they have faced and their unwavering commitment to worship as Catholics. In their historical essay they write:

“Since 1976, all who have come through the doors of Dignity San Antonio have at some point had the desire to embody and work for Dignity’s vision. For a critical few, our community has literally saved their lives by giving them a glimpse at their goodness and their God given gift of sexuality. For some, they have come and found some healing from the painful experiences of the past but have no passion or strength to struggle further. They have moved on. And there are others who have come and joined the ministry and struggled to balance their faith in the context of Catholic Doctrine with the teaching of the Gospel of Jesus. All of us find ourselves forging a path where there is not one, in the hope that one day we will be united and fully included in our church and in society.”

The queen of soul-stretching popera, transgender artist ANOHNI (formerly Antony Hegarty of Antony and the Johnsons) very well may have...