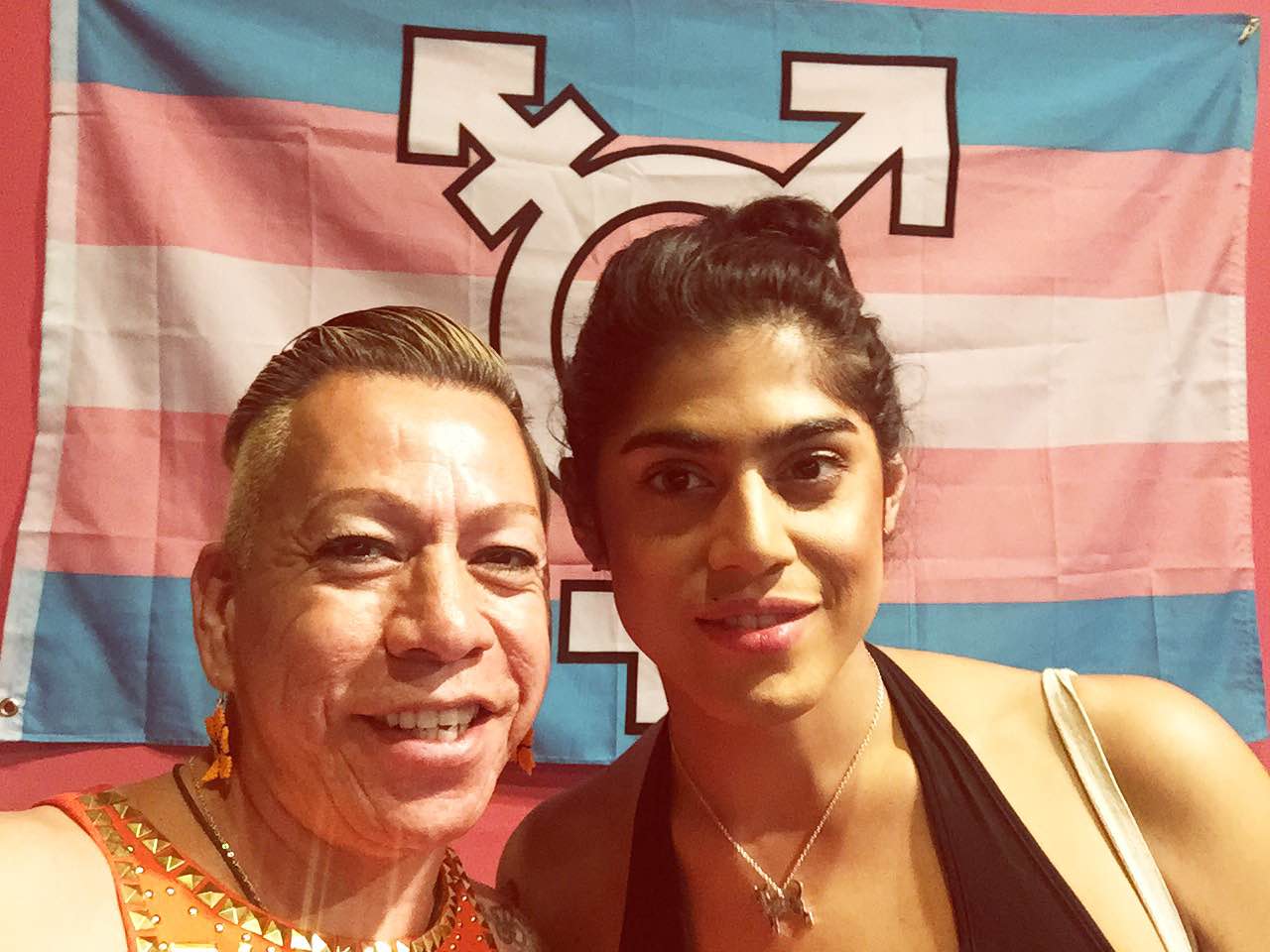 On a recent Saturday morning, I had the opportunity to speak one-on-one with legendary trans Latina activist Bamby Salcedo after she led a workshop on community organizing at the Esperanza Peace and Justice Center. Salcedo was in town for a screening of the documentary Transvisible: The Bamby Salcedo Story, a film about her life and activism.

In reflection, it’s surreal to have met a trailblazer who has helped to pave the way for trans women like me to speak out and demand change, let alone to have an hour-long conversation with her, ending with a beautiful selfie session in front of the transgender pride flag that hung above us in the upstairs space at the Esperanza. It’s something I’ll never forget.

One of the big problems that seems to affect the San Antonio activism scene is the resistant political environment, particularly when it comes to trans and queer issues. What have you done to help change the hearts of people who haven’t always been on board with your message?
Well, what I do is bring awareness to specific issues, but bring awareness in different ways. I’ve done public speaking, which is obviously important, but I’ve also organized and participated in direct action. Of course, with some of that, there has been resistance and criticism, but the way I look at it is, it’s not really about me. It’s about addressing issues and what’s happening in the community in a way that brings the results and the change that we want.

I think we need more people standing out there holding signs and disrupting the status quo, particularly to draw more attention to these issues that affect trans women. But I think sometimes that respectability politics and having to appeal to everyone — including the opposition — in order to be heard, gets in the way of that.
And that unfortunately happens. And there are going to be people who are with you and there are going to be people who are against you. If there are people who have historically not supported the community, what makes us think they’re going to support us now? Actions speak louder than words, so actions will show what things are changing, but also what is not.

How do you see things changing right now?
I can tell you that the trans community specifically is not in the same place we were 30 years ago or even 10 years ago. “Trans” is a hot topic right now, but I think it’s important for everyone to understand that even though there is greater visibility, the violence against the trans community has increased.

Which sadly happens with more visibility. We should be able to come out and represent ourselves but there is no guarantee of safety. As a greater LGBTQIA* community, we fail to address that trans women, black trans women in particular, are at the highest risk of experiencing violence.
And you know, one of the things that I showed [during the workshop] was a video clip of an action we did at the National LGBTQ Task Force Conference that took place in Denver, Colorado last year. We read a statement saying how the LGB has been exclusive of trans people and how we need to invest in improving the livelihood of trans people. Because even though we are visible and there are certain people being uplifted and highlighted in the media, the social problems are still there, the marginalization and continued discrimination doesn’t just go away.

And the trans people who are most uplifted seem to be the ones who can pass and blend into society more easily than others. We are more acceptable when we appeal to societal views of gender and presentation.
And that’s not the reality of many of us, right? Not all of us have had those opportunities. Trans people transition every day, but only certain experiences are focused on and those experiences don’t reflect what the common trans person experiences.

I think those of us who have had more opportunities and support need to recognize that it is not the norm, and we need to speak out for those who don’t have those same options.
Like I said, it has to come back to addressing the social issues that most trans women face directly. Just because we are visible and are receiving media attention, doesn’t mean that the struggle from 30 years ago isn’t still there. So we need to organize to say that enough is enough and there needs to be attention to this issue. And I often have to do that with direct action: through sit-ins and shutting things down and calling out politicians … We also need to reflect on how we are going to empower people. Many of us in the trans community, especially trans women of color, are struggling to survive day-to-day; and not only do we need that to change, we need to heal our community in the process because there is so much pain there.

There isn’t a lot of talk on how we are going to heal and how we are going to mourn and grieve and process our pain. But a lot of that stems from lack of resources, I’d say. And the ones we have are put together half-assed by people who don’t understand the needs of trans people.
And that’s something we brought up during that direct action in Colorado. We asked the LGB community to intentionally invest in trans leadership, trans organizations and groups to support the work that we’re doing monetarily. Because we’re doing all this work but we’re still so behind legislatively, economically, academically as trans people because we don’t have those resources to go to the next phase in our movement and in our lives.

What are some things you brought up in your workshop as major concerns for the trans community?
One thing was to see where we are when looking at the local context and looking at the different roles we can play within the movement. Not everyone is going to be at the forefront, but there are people who can help in other ways; there are people who have different abilities. But I think the most important things, despite people having differences of opinions, are to have a common goal and to develop a strategy to achieve it.

So basically, having a lot of awareness?
Self-awareness and also collective awareness of what we want, how we are going to achieve it, and organizing to come up with solutions. Can you speak about the film Transvisbile and what it means to you?
Well, I can say a lot about the film for sure. I feel very privileged and lucky that there was a couple of individuals who approached me, who believe in the work that I’m doing and believe that it’s important to share my story. Because I’ve been able to turn the horrible lived experiences that I’ve had into opportunities … I’m hoping that people will be able to see Transvisible and possibly relate to what I’ve been through. I hope that it inspires people to take a stand and to realize that, despite the different challenges and the different issues that we may encounter in our lives, that we can still be great and make a difference in our communities.

Is there a way that we can access Transvisbile aside from a private screening?
This is not a big production. This is actually something that is community-funded and supported. We did a Kickstarter campaign, and the people were the ones investing in this film and investing in me. Unfortunately, we have not found a way to distribute the film. But we’ve shown the film in different circuits, festivals, and private screenings, and there’s a way to order a copy directly from our website (transvisiblefilm.com) with a donation to the [email protected] Coalition. Speaking of, can you talk more about the organizations that you’re working with right now?
The main organization that I work with right now is the [email protected] Coalition. We have representation in 11 different states and we have seven organized chapters … But I organize with many different groups that have different areas of focus and different approaches. I would not be able to do the work that I do without the support and effort of many organizations.

And I’m sure it takes that group effort to get shit done. Can you talk about some of the different approaches these orgs have?
Well, some of the groups I’ve worked with focus on the prison industrial complex — some who are for reform and some who are for liberation — but I believe we have to approach that movement particularly from different ways. We have to work within the system to change the structures but also to find alternatives to incarceration.

And that goes back to identifying the root of the issue?
Definitely. It’s a system and how the system is set up. We know it’s not going to go away because it’s a billion dollar industry at this point. But we need to think about how we can work around the system to subvert it and to empower those who are targeted by it. And that’s just one of many issues I’m concerned with, but of course they all overlap in some way.

I can definitely see how they all connect. Especially in terms of how the law treats trans women and trans people in general. I call it the criminalization of transness because we can’t even use public bathrooms or spaces without being considered.
We do get criminalized for who we are. We get profiled, we get put in jail, we are wrongfully accused for who we are.

And when we are targeted for who we are, we aren’t treated as who we are.
Right. We are constantly dehumanized by the current system.

And from a media standpoint, we have a long way to go in terms of how we cover trans issues as a whole. I mean, how many times has a trans woman been murdered and then misgendered by a news source for a story?
Well, I think LGB news outlets and alternative outlets are more sensitive to that fact, but mainstream media oftentimes re-victimizes the person, which perpetuates violence. It is sending a message that it is okay for others to misgender us, right? Mainstream media needs to be aware of these messages and they need to be ethical about it going forward.

With all the emotional work and bullshit that trans activists deal with, do you ever take the time for self-care?
Oh yeah, I have to understand that it’s only me and I don’t have the solution to all the problems. So sometimes, I just have to say no and take a step back. I have responsibilities within the organization I’m running and within the community, but it can get crazy. Like I said, there are people who are with you and there are people who are against you; and sadly, there are people who will want to destroy you. But they can talk all the shit they want about me — my work speaks for itself.

Forty-three years before the mass murders at the Pulse nightclub in Orlando, there was another tragedy that left 32 people...