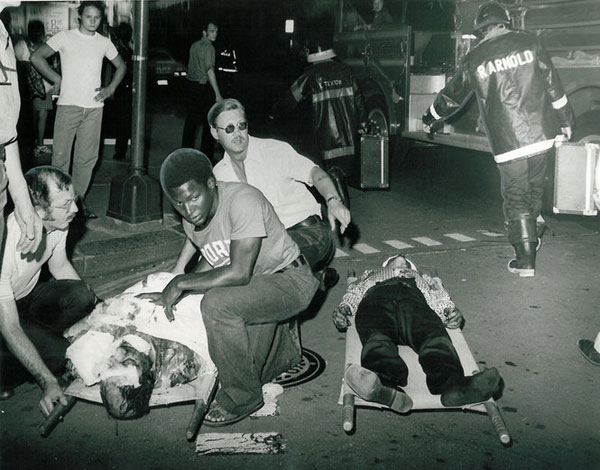 Victims of the 1973 Up Stairs Lounge fire in New Orleans await medical care. The documentary, "Upstairs Inferno," documents the tragedy in which 32 died. It will be screened at the San Antonio Film Festival on July 28. (Archival photos via Upstairs Inferno.)

Forty-three years before the mass murders at the Pulse nightclub in Orlando, there was another tragedy that left 32 people dead after an LGBT bar in New Orleans was set on fire by an arsonist. A documentary chronicling that event will be screened at the San Antonio Film Festival on July 28.

The documentary, “Upstairs Inferno,” is directed by Robert L. Camina of San Antonio, whose previous film, “Raid of the Rainbow Lounge,” was first screened locally at the San Antonio QFest in 2013. The Up Stairs Lounge was on the second floor of the building.

Camina’s film recalls the night of June 24, 1973 when the Up Stairs Lounge in New Orleans was filled with people for the weekly beer bust. Around 8 p.m., flames exploded into the front door of the club which was located on the second story of the building. It is believed an arsonist had lit the carpeted stairway to the entrance on fire making it impossible for those in the bar to escape the inferno.

Patrons trying to flee the blaze were confronted with windows blocked by security bars. Those who could squeeze through the bars jumped two stories down to the sidewalk. Some died from the fall. Others remained trapped inside. The inside of the Up Stairs Lounge after the fire.

By the time the fire was brought under control, 32 patrons were dead, some too burned to identify.

Adding to the tragedy was the attitude of law enforcement officials who did little to investigate the cause of the incident. Community reaction was negative as well. Newspapers were callous in their descriptions of the devastation and in some cases, local churches refused to host memorial services for the victims. Several corpses remained unidentified and eventually buried in a mass grave at the pauper’s cemetery.

“I am thrilled to finally bring this film ‘home’ and I am honored to be part of the SA Film Festival,” Camina said in a statement. “Audiences should expect to see a balance between investigative reporting and very intimate profiles of people lost or affected by the tragedy. The victims are more than statistics, more than names in a newspaper clipping or even names on a plaque. These were unfinished lives, tragically cut short by a senseless act.” Camina acknowledges the screening of the film comes at time when the community is mourning the lives lost in Orlando. “This is a gruesome story, there is no way around it and in light of the recent mass shooting at the gay nightclub in Florida, the parallels strike a painful chord. Hopefully, now, more than ever, audiences walk away from the film with a renewed call for compassion: Compassion for those unlike us. Compassion for those who are hurting. Compassion for those in need.”

“Upstairs Inferno,” screening at the San Antonio Film Festival, July 28, 2016 at 7 p.m. at the Tobin Center for the Performing Arts – Felk Family Rotunda. Tickets are $15. Click here to purchase.

When I received an invitation to interview Bruce Marks while he was visiting San Antonio in May, I jumped at...