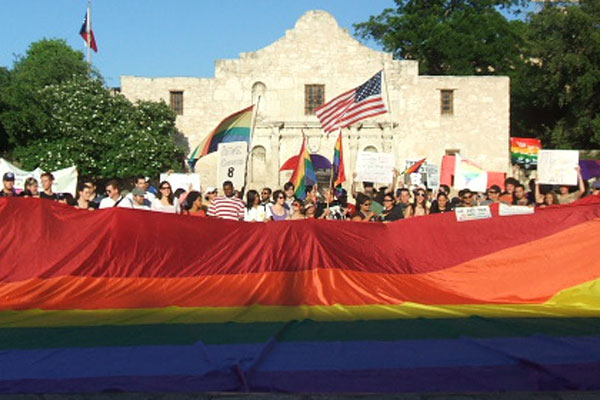 There are approximately 6,000 LGBT immigrants among the 134,000 individuals in Texas who enrolled in the Deferred Action for Childhood Arrivals (DACA) program, according to a study by the Williams Institute. All of these people now face deportation after U.S. Attorney General Jeff Sessions announced on Tuesday that the DACA program is being terminated.

The February 2017 study by Dr. Kerith Conron and policy analyst Taylor N.T. Brown reports that of the estimated 10,000 LGBT individuals eligible for DACA in Texas, over 6,000 enrolled in the program, including 4,000 who renewed their applications.

Estimates of the number of LGBT DREAMers and DACA participants as of March 2016. (Source: Williams Institute)

DACA allows undocumented immigrants who entered the United States before the age of 16, and meet other requirements, temporary work authorization and protection from deportation for a renewable two-year period. The program was initiated in 2012 through an executive order signed by former President Barack Obama.

“I am here today to announce that the program known as DACA that was effectuated under the Obama administration is being rescinded,” Sessions said in his announcement. The Trump administration says it will continue renewing permits for anyone whose status expires in the next six months, allowing Congress time to act before any protected individuals are deported. First-time DACA applications from LGBT individuals accepted by the Department of Homeland Security by Top 5 and all other states as of March 2016. (Source: Williams Institute)

According to the statistics in the Williams Institute study, 820,000 individuals across the US applied for DACA. An estimated 36,000 of them are LGBT. The majority of all DACA participants reside in California, Texas, Illinois, New York, and Florida.

“Policies related to immigration and migration impact LGBT people – including those who are foreign-born, as well as their US-born partners and children,” Dr. Conron said at the time the Williams Institute study was released. “DACA allows many younger LGBT immigrants to pursue education, to earn a living, and to contribute to the US economy.”

Members of the San Antonio delegation to the Texas legislature have spoken out against the Trump administration’s termination of DACA.

State Senator Jose Menendez said in a statement, “It will punish good people for actions they had no control over, tear apart families, and will be damaging to the nation’s economy through a devastating multibillion-dollar hit.”

“Today I am saddened and heartbroken by President Trump’s decision to end the Deferred Action for Childhood Arrivals program, or DACA. It flies in the face of everything this country and our community stand for. I want to be clear, I believe this is an inhumane and callous act,” State Rep. Diego Bernal said in an email to constituents.

In 2015, it seemed Janet Jackson was poised for a major comeback. After debuting atop the Billboard 200 albums chart...