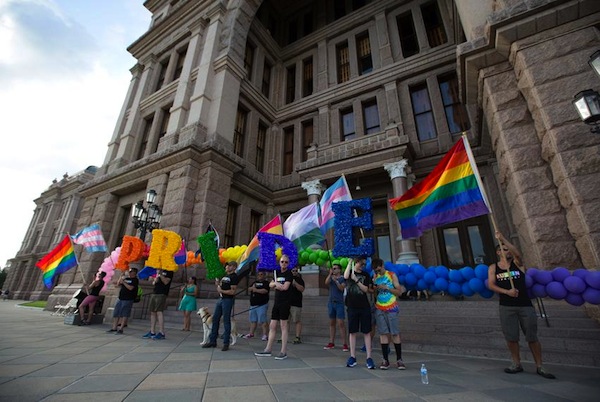 Activists and members of Austin's LGBTQ community gather on the steps of the state Capitol to celebrate the anniversary of the 1969 Stonewall riots on June 28, 2017. (Photo: Austin Price for The Texas Tribune)

By Edgar Walters, The Texas Tribune

After backlash from lawmakers and advocates, a state board voted Tuesday to undo a rule change that would have allowed social workers to turn away clients who are LGBTQ or have a disability.

Gloria Canseco, who was appointed by Gov. Greg Abbott to lead the behavioral health council, expressed regret that the previous rule change was “perceived as hostile to the LGBTQ+ community or to disabled persons.”

“At every opportunity our intent is to prohibit discrimination against any person for any reason,” she said.

Abbott’s office recommended earlier this month that the board strip three categories from a code of conduct that establishes when a social worker may refuse to serve someone.

The governor’s office recommended removing language that prohibited social workers from turning away clients on the basis of disability, sexual orientation or gender identity. The reason, Abbott’s office said, was because the code’s nondiscrimination protections went beyond protections laid out in the state law that governs how and when the state may discipline social workers.

That set off an immediate firestorm of criticism from social workers, LGBTQ advocates and advocates for people with disabilities.

Tim Brown, a social worker on the behavioral health council, complained that he had been the subject of much criticism after the board’s earlier vote on Oct. 12. He said the board made its vote not because it wanted to permit discrimination but because it was stuck between the “proverbial rock and a hard place.”

“We’re opposed to any form of discrimination,” Brown said.

State Sen. José Menéndez, D-San Antonio, and state Rep. Jessica González, D-Dallas, urged the board Tuesday to undo its vote and said they would file legislation next year aimed at preventing discrimination against marginalized groups.

The board also voted to seek an opinion from Texas Attorney General Ken Paxton’s office about the legality of its rule change, though the board has previously indicated that Paxton’s office would likely oppose explicit protections for LGBTQ Texans and Texans with disabilities in the social worker’s code of conduct.

Darrel Spinks, the council’s executive director, said earlier this month that he had already sought an “informal” opinion from the Texas attorney general’s office about the rule change and that the attorneys agreed with Abbott’s interpretation. “Your rule needs to match what the statute is,” Spinks said at the time.

Paxton, a Republican, has historically opposed expanded protections for LGBTQ people. Spinks estimated it would take 90 days or more to get a formal attorney general opinion.

“We are so grateful for the vote to keep the anti-discrimination protections in place,” said Will Francis, executive director of the Texas chapter of the National Association of Social Workers. “This is a recognition of the key principle that a social worker’s personal beliefs must never impede a person’s right to self-determination or access to services.”

LGBTQ+ advocates and state lawmakers are mobilizing against the Texas State Board of Social Workers' removal last week of protections...