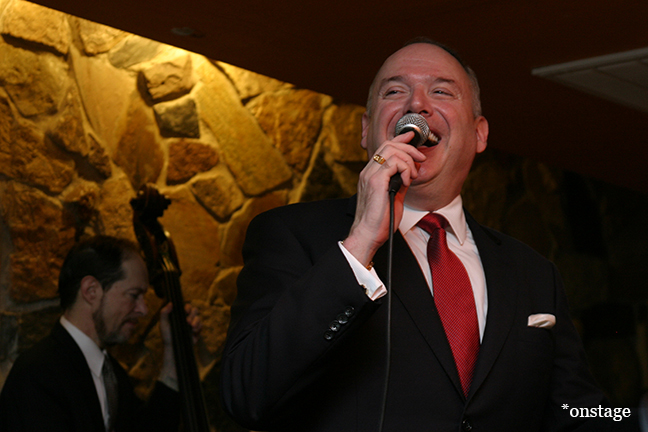 “I’ve lived a lot since I was 29 and I understand the songs better now than I ever did.”

Jazz singer and public-relations pro Ken Slavin is San Antonio’s rara avis—a very animated anachronism from a time when gentlemen sported impeccably fitted jackets for daily wear, and equally well-tailored manners. Onstage and off, this 6-foot-two-inch silver fox looks as if he’s just left the Rat Pack at the club (favorite drink? vodka martini), and although his PR gigs and his music depend on his digital competence, he’s always felt he was born in the wrong era. “I’m a very old-fashioned person in a lot of ways,” he admits, “as far as how I dress and how I conduct myself in public.”

In his quietly ornate West Side living room, we speak for nearly five hours about his career in music—he’s celebrating his 25th anniversary this year. There’s a Thanksgiving-worthy plate of appetizers to my right. Three CDs are waiting for me by the door.

“I’m sad that there isn’t more elegance in the world,” he says. “I get sad that there isn’t more appreciation of refinement and beauty in the world.” His timeless soigné is reflected in his songbook, which lovingly reinterprets the standards of jazz and American pop’s golden-era vocalists. The Threepenny Opera’s “Mack the Knife” is his good-luck charm. “I sing them the way I feel like singing them. In that regard I feel I’m truly an artist.”

In one key show-business tradition, Slavin, who turned 54 in August, is entirely modern: He doesn’t try to hide his age, and he finds it amusing when someone fudges. “That would require them to be really careful about mentioning something that they remember from the ’70s,” he says.

Slavin’s most recent CD records his debut at New York’s Metropolitan Room on Halloween night 2013. He recounts with delight the SA celebrities who flew up to see him perform: actresses, former Bexar County DA Susan Reed, media personality Chris Duel. But that triumph, which led to an open invitation to sing at the upscale cabaret and a New York agent (Italian, from Long Island, natch), has been accompanied by heartache and actual heart pains.

In 2007, Slavin released I’ll Take Romance, and performed more than 200 gigs, while taking care of 10 PR clients. It was too much. “I stopped singing for eight months ’cause I literally had a meltdown … I had to go to therapy … I couldn’t deal with it.” Two years ago, he was diagnosed with severe atherosclerosis—he was told he was a heart attack waiting to happen—and doctors installed two stents in his coronary arteries. Then, late last year, his beloved mother suffered a stroke, followed several months later by the news that she had developed stage-four cancer.

“I feel like I’ve survived … just about everything that can be thrown at a person in life … and I am a survivor and I am not going to let anything hold me down,” he says.

The list of obstacles overcome includes childhood bullying. “The way I am now is exactly the way I was when I was 10, just a smaller person.” He laughs. “I arrived at my persona early in life, but it didn’t mix well with the kids on the playground.”

“I have to be honest,” he adds. “I went through a long period in my life of self-loathing about being gay. I did not want to be gay. I wanted to be straight. I thought that I could go to therapy and be fixed, quote unquote, which was so naive and stupid when I look back on it.”

His naivete may have been an asset in his career, however. He’s self-taught, and claims he was performing publicly before he really knew what he was doing. “I had the good fortune of having always loved singing this kind of music since the age of 10, listening to records in my room where no one could hear me … except my family. They always heard me singing through the door.” When he was 13, he asked for big-band records, and his parents gave him a Reader’s Digest box set.

Slavin landed his first paying gig at Dick’s Last Resort on the River Walk in 1990, and that year was a turning point for another fundamental reason: His mother asked him if he was gay, and he told her the truth.

“She was wonderful about it,” he recalls. “Mom kind of just took the leadership role and gave the official news to the family.

“When I was finally confident that I was not being rejected by my family, I didn’t care who knew anymore.”

His evolution into an out gay man happened quietly, without a formal public announcement, and it wasn’t followed by a big gay homecoming. “It’s not because I don’t have gay friends, I do. But the majority of my fans that come to listen to me, they’re straight, they’re not gay. I had one person tell me years ago—and I don’t remember who it was—but some gay person told me that I wasn’t gay enough for my audiences.

“I was angry, because isn’t the gay community about acceptance of all? It’s not supposed to be that you have to fit a certain mold.”

Now that Slavin is “a man of a certain age,” he admits he’s a little afraid of being alone. “I think that it would be a shame, to live a long life and not have someone to share it with,” he says, while acknowledging that as with many artists, “I think it would take a special person to be able to understand the kind of hours I keep.”

But he’s content with who he is and what he’s doing. More trips to New York, and a full-on tour, are on the bucket list, and he’s percolating ideas for at least two new albums: saloon and “down and out” songs—he mentions Billy Strayhorn’s “Lush Life” as an inspiration—and an album featuring Spanish boleros—a tribute to his Spanish and Mexican heritage.

“What I have discovered, in 25 years of performing, when I stopped trying so hard and when I just let the music come out and just be me, that’s when I really started getting an audience,” he says. “I get up there and it’s Ken Slavin singing a song the way Ken Slavin thinks it should be sung.”

Full-body stretches for home and office

No fancy equipment or gym necessary—just you and a wall. Inhale like you are smelling something wonderful. Feel how your...