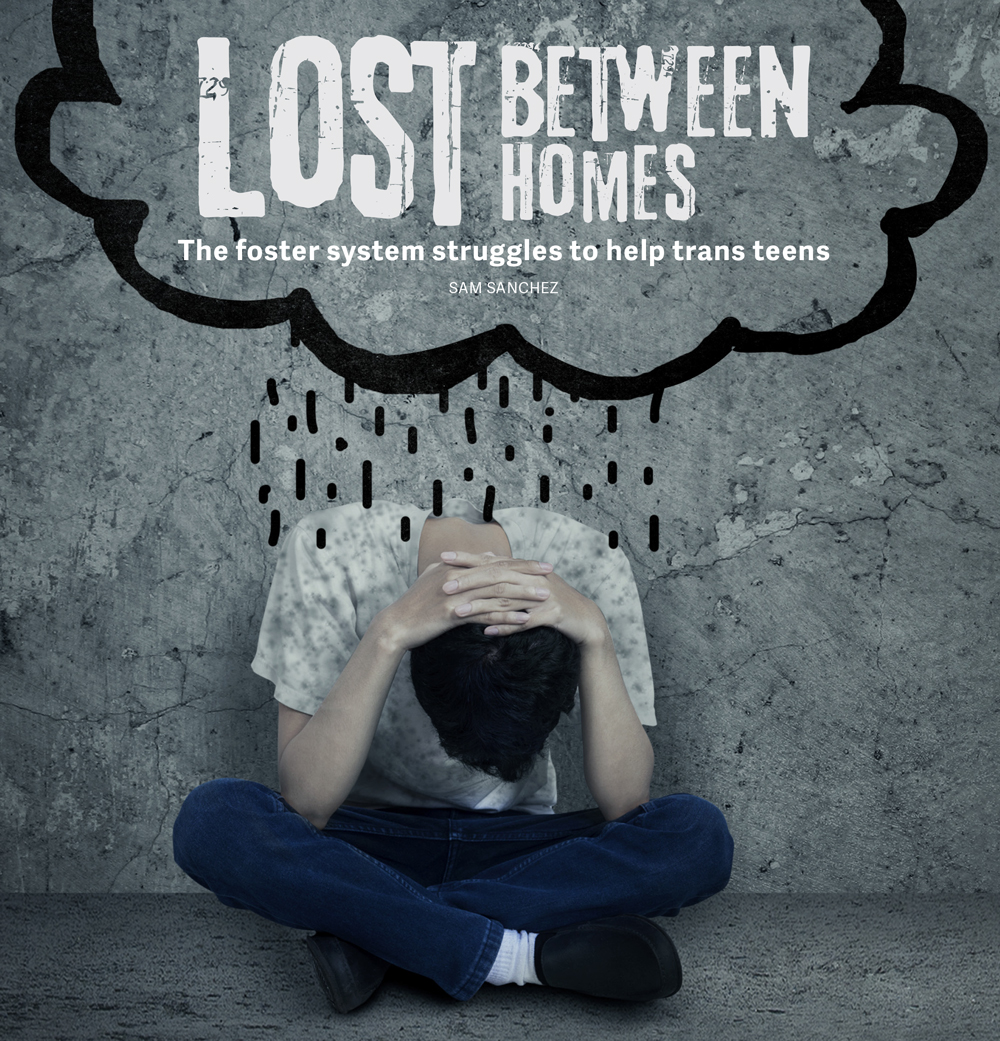 Alex lived with her family in a nice home in an affluent San Antonio suburb, where she had all the comforts and advantages that come with that life. Although she was born male, Alex identifies as a female, a revelation that led to friction with her family and her eventual estrangement from them.

Alex’s experiences after she was placed in the foster-care system were no better. She says the families she was sent to live with were never told of her gender identity. “CPS didn’t tell them until I was already placed within the home,” she said. She also remembers counselors and psychologists whom she says would attempt to confuse her. “There would always be something mentally wrong with me. Every year, I was required to have a psychological exam, but the psychologist that I was forced to see–he would creep me out. He said that I wanted to be something that I was not.”

“If they had asked me questions, it would have made me feel like someone actually cared about me,” Alex added. “I would constantly ask myself, why can’t people see me the way that I want to be seen?” Ultimately she ended up on the street. “I just wanted to die. I didn’t see any happiness for myself. I just wanted a shower and a home. I was so weak and dizzy and tired and hungry.”

Alex’s luck turned after she found a foster home with parents who accept her gender identity. Her foster mother, Sally, says Alex is a teenage girl who is now happy and outgoing. “The anger has dissipated and she is like a different kid now,” Sally said. “In the beginning Alex suffered emotional outbursts. But Alex is resilient, a trait which many transgender youth need for enduring the discrimination and hostility they often begin to absorb at an early age.” Sally said that while her foster daughter is finally beginning to blossom, she suffered heavy emotional costs.

The life of a transgender child can be difficult, even for those with accepting parents. The 2010 National Transgender Discrimination Survey, conducted by the National Center for Transgender Equality and the National Gay and Lesbian Task Force, reports that in Texas, 85 percent of trans kids in elementary and high school experience harassment; 46 percent experience physical assault; and 9 percent are victims of sexual violence. The report says harassment for this group is so prevalent that 11 percent of trans kids in Texas stop going to school altogether.

Trans kids in foster care face a system that is reluctant to accept them for who they are, says Janet Garza, board chair of the nonprofit advocacy group Project Embrace. Project Embrace was founded in 2009 to assist LGBTQ youth in and out of foster care by providing education and training to institutions and individuals. They write on their website that many of the “foster care alumni” they’ve spoken to say they “did not feel safe with some of the foster families that they once were placed with and did not feel that they received culturally appropriate resources and services through the State system.”

Garza says the Texas state application for foster care includes no questions for foster parents that address LGBT concerns. The result, she says, is that many children are forced to endure discrimination or homophobia from parents who are not given an opportunity to learn culturally appropriate behavior.

“It’s not uncommon for LGBT youth to bounce from home to home, facility to facility,” Garza said. She recalls a transgender youth who ended up homeless after the foster parents asked the child to leave. “I asked one of the siblings what had happened to his elder brother, and the answer was that he had changed his name and started dressing as a female.”

LGBT foster kids who live at residential placement facilities in Texas are sometimes victims of harassment and physical isolation, Garza explains. “They end up isolating [them] because they either do not have the education or the facility that is needed for these teens.”

Garza insists LGBT reforms in the foster-care system must include mandatory training for everyone involved. She believes the answer lies in collaboration. To that end, she teamed up with Omar Narvaez, a community educator from the Dallas office of Lambda Legal, to present a training session called Moving the Margins: LGBTQ Youth in Care to CPS employees around the state.

Moving the Margins was originally developed by Lambda Legal and the National Association of Social Workers as a training session for child-welfare and foster-care employees. The purpose of the class is to educate social-work professionals about the needs of LGBT foster kids and to help them “identify situations and scenarios associated with sexual orientation or gender identity that participants are most likely to face in their current jobs.”

Narvaez says the training has been given at least five times in San Antonio, most recently last summer. He estimates that about 800 CPS employees around the state have taken the class. However, he says that number is just a drop in the bucket; CPS has almost 10,000 employees in Texas.

Not perfect but getting better?

LGBT ally Ana Alicia Perez is a social worker who was employed as a conservatorship specialist at CPS in San Antonio for seven years. She told Out In SA that while there’s room for improvement, LGBT kids are getting more attention now than they have in the past.

Of her time at CPS she says, “I worked with extremely caring folks in all realms–caseworkers, agencies, attorneys, advocates–who strive to meet the needs of the children and their best interest.”

“I don’t want to come off as all sunshine and rainbows about kids in foster care, because no doubt being in foster care to begin with is difficult when you are away from family and the home you know, and to add being LGBT on top of that has to be so much harder to manage,” Perez said.

“I don’t want to minimize anyone’s negative experiences,” she added, “but I do want to point out that child welfare and the foster system are trying to improve things for children, and my experience is that they have come a long way from before, and will continue to strive for improvement.”

Among those Perez says are changing for the better are adoption agencies that are sensitive to the needs of LGBT clients. She cited the Children’s Shelter, Therapeutic Family Life, Pathways, Benchmark, Family Link, Lutheran Social Services, and DFPS itself as agencies she knows have worked LGBT kids and same-sex couples who want to be foster or adoptive parents.

According to data from the Texas Department of Family and Protective Services, there were 3,473 children in foster care in Bexar County in 2013. That number is down from 201,2 when the total was 3,628. The statistics show that 7 of every 1,000 kids in Bexar County are in foster care. It is not known how many of them are LGBT since no statistics are gathered for this segment of clients.

Out In SA was not allowed to interview a current CPS employee, but was asked to submi questions to CPS media specialist John Lennan about the agency’s efforts to implement equitable treatment of LGBT kids who are wards of the state.

OISA: Is it true that during the intake process, CPS does not take into account that a child may be gay, lesbian, or transgender?

CPS: Intake specialists are trained to assess concerns from the public, to determine if the information being reported meets the statutory definitions of abuse and/or neglect. To do this, detailed information is gathered about the child, their family, risk factors, and overall dynamics that could play a role in the abuse or neglect occurring. It is not mandatory for intake specialists to gather information on how a child identifies. However, if it is reported that a child’s identity could be a cause of contention or conflict in the home, it would be considered a potential risk factor to their overall safety. Specific information on these dynamics would be documented in the report narrative, and if the actions of the parent or caregiver meet the definition of abuse and/or neglect, an intake would be forwarded to CPS for investigation.

OISA: We understand Lambda Legal got involved in helping train CPS staff. What did they do?

CPS: CPS Program has worked with Lambda Legal to offer educational courses to our staff and external stakeholders. To date, training has been provided to CPS caseworkers, supervisors, and court-appointed special advocates across the state… In addition, Cenpatico, the behavioral-health subcontractor for the state’s managed-care program for foster children, offers a course in working with LGBTQ youth in care as well. This course is open to providers. CPS also participates in a workgroup with external stakeholders including Lambda Legal. This group will be looking at policies, practices, and trainings within CPS regarding this population and the best way to deliver education and information.

OISA: Is it true that when CPS has a child who identifies as transgender, the foster family is not informed and consequently doesn’t know how to address the child’s needs?

CPS: No. Caregivers should be informed about a child’s needs.

OISA: Foster kids get Medicaid, but trans kids who may need hormone therapy or reassignment surgery get no relief because those procedures are considered “elective.” Would the state approve such treatments if the child could find the money to do it?

CPS: The Department does not have a policy on this specific treatment but generally does not approve elective procedures or surgery for a minor in care and would actively involve the court presiding over the child’s case if elective treatment of any kind were being considered.

OISA: What about [adoption] agencies that CPS works with? Many are religious based and may not want to address the “complications” brought by gay, lesbian, and trans kids. What can be done to work with them?

CPS: CPS does not discriminate against contractors for religious affiliation. CPS can educate contractors about meeting youth needs in general, however. (See answer to second question.)

Additional reporting by B. Kay Richter.

Alex’s and Sally’s names have been changed at their request.

From reading cookbooks in the back of HH-60 helicopters to a yearlong apprenticeship where his fingers never left the cutting...