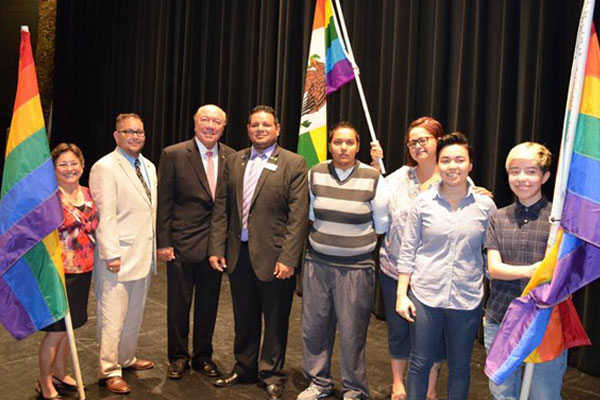 State Sen. Juan “Chuy” Hinojosa (third from left) with officials from Equality Texas and members of Aqui Estamos at the rollout of the TransVisible Project in the Rio Grande Valley. (Photos: Facebook)

A public awareness awareness campaign to introduce transgender Texans to communities all over the state was rolled-out on August 11 in the Rio Grande Valley.

The campaign, the TransVisible Project, was introduced at a press conference by officials from Equality Texas, state Sen. Juan “Chuy” Hinojosa and Aqui Estamos, an LGBT activist group headquartered in McAllen.

According to the press announcement, the aim of the TransVisible Project is to educate Texans about discriminatory legislation which activists say will be filed by some politicians in the upcoming legislative session and to urge everyone to stand up for the equality of every person in the state.

“Transgender Texans, like all Texans, need to use public restrooms without fear for their safety or security. Proposed laws in other states and what may be proposed in Texas during the next legislative session would roll back decades-old policies and laws that ensure that transgender people have access to restrooms appropriate to their gender,” said Lou Weaver, transgender programs coordinator for Equality Texas.

The TransVisible campaign was first introduced in Houston last March in the aftermath of the defeat of that city’s Equal Rights Ordinance. “The purpose of TVP is to educate Texans that transgender people are our neighbors, families, coworkers, and friends,” Weaver said at the time.

“As an undocumented transgender man in the Rio Grande Valley, I often felt isolated and did not know where to find help. It’s difficult being transgender. It’s also difficult to be undocumented. To be both can be very dangerous, especially when our state government continues to spread transphobia,” said Jay Quiroz, one of the speakers at the press conference. “Organizing with Aqui Estamos has helped me find a community . . . I now feel hopeful and empowered to fight for LGBTQ justice in the Rio Grande Valley, the place I call home.” “I am proud to partner with Equality Texas to educate our communities about the myths often used to mislead citizens and discriminate against our fellow Texans,” said Sen. Hinojosa. “We support efforts to bring attention to LGBTQ residents in the Rio Grande Valley and across Texas to ensure our constituents have accurate information. We must not tolerate discrimination for any reason. Every person should be treated with dignity and respect.”

As part of the TransVisible RGV rollout, Aqui Estamos is hosting their Second Annual Queer and Trans People of Color Conference on August 11 and 12. Among the workshops offered at the conference will be one hosted by Equality Texas for local media on using inclusive language when reporting about the LGBT community.

“The Rio Grande Valley continues to make strides in breaking barriers and serving as an inclusive community. While some statewide politicians spend their time grand-standing, expressing fake outrage and misrepresenting the facts to try and manipulate Texans, we have leaders in in the Rio Grande Valley working to educate and advance our community who don’t take these attacks lightly. Discrimination continues to plague the LGBTQ community, but more so for our transgender siblings.” Dani Marrero Hi of Aqui Estamos said at the press conference.

A short documentary that premiered in March at the South by Southwest Film Festival tells the emotional story of a...