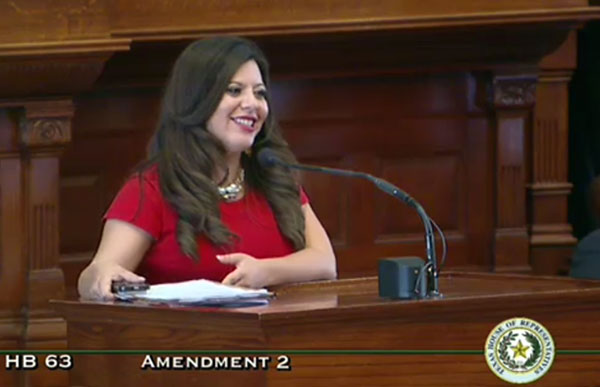 On January 12, the Washington Post reported that during a meeting with lawmakers on immigration President Donald Trump made a vulgar comment in reference to immigrants from Haiti and Africa.

Trump’s words were met with widespread outrage. For State Rep. Mary Gonzalez of El Paso, the president’s comment presents an opportunity to endorse a more positive attitude, one that rejects negativity.

“After Donald Trump’s comments yesterday, anyone could be forgiven for feeling that divisive rhetoric and antagonism have taken the place of policy-making. But it doesn’t have to be this way.” Gonzalez said in a statement on January 13.

Gonzalez said she was introducing the “Positivity in Politics” initiative which seeks to highlight examples of positive efforts by grassroots leaders over the next two years leading up to the 2020 presidential election.

“Over the next two years, we will be recognizing communities across Texas coming together, in the true spirit of America, to reject negativity and work together for a better future.” Gonzalez said.

Gonzalez, who’s running for reelection to the Texas House District 75 seat, was recently endorsed by the Texas Equity Pac for being “a fierce advocate for equality.” In 2015, she was honored by Equality Texas with the Advocate Award which is given annually to “a public figure or figures with a steadfast reputation for supporting issues of equality for all Texans.” That same year, a transitional center for LGBT youth in El Paso was named in her honor.

In October, Gonzalez was one of six finalists nominated for the Victory Fund’s first-ever Tammy Baldwin Breakthrough Award.

“People of color, LGBTQ folks, and other marginalized communities deserve to have their voices amplified and their work recognized,” says Gonzalez. “I am looking forward to helping share their stories through my ‘Positivity in Politics’ initiative.”

Rep. Gonzalez has asked that if you know of a leader, organization, or community you’d like to be recognized, to contact her office at 512-463-0613 or via email at [email protected].

Originally published in the San Antonio Current. If you've ever been to a City Council meeting (or, to be honest,...