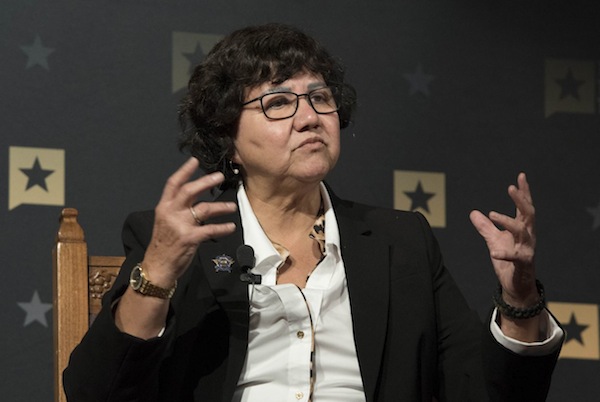 Lupe Valdez, Dallas County Sheriff, speaking on the Race and Policing in Texas panel at A Symposium on Race and Public Policy. Jan 14, 2017. (Photo: Bob Daemmrich for The Texas Tribune)

*Editor’s note: This story has been updated throughout.

Democratic Dallas County Sheriff Lupe Valdez is still weighing a run for governor, despite reports that she has resigned ahead of a likely a campaign.

“As she has stated in the past, the Sheriff is considering the next stage in her career,” said the spokeswoman Melinda Urbina. “A letter of resignation was not submitted today. The Sheriff will make a formal announcement when her final decision is made.”

Valdez told The Texas Tribune earlier this month that she was exploring a challenge to Republican Gov. Greg Abbott. He’s seeking a second term in 2018.

Democrats have been looking for a serious gubernatorial contender ahead of the Dec. 11 deadline for candidates to file for the 2018 primaries. So far only little-known Democrats have lined up to take on Abbott.

“Too much of one thing corrupts, and I’m a strong believer in a two-party system,” she said. “I’m hoping that enough people are seeing that too much one-sided is not healthy for Texas.”

The list of other candidates exploring a run includes Dallas businessman Jeffrey Payne and Tom Wakely, a former congressional candidate from San Antonio.

Andrew White, the son of late Gov. Mark White, has been exploring a run for a number of weeks. Amid reports that Valdez was running, White said he is “full steam ahead” with preparations for a potential run and will have an announcement next week.

A 20-year-old man has been indicted by a grand jury in connection with the death of Kenne McFadden, a San...