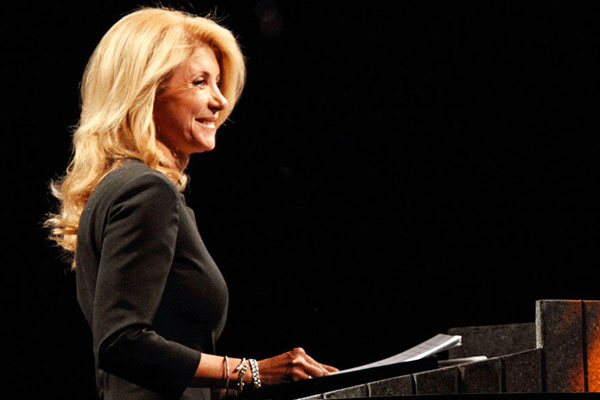 Former state Senator Wendy Davis will be the keynote speaker at the Equality Texas Spirit of Texas Brunch on September 25 in San Antonio at the Rosenberg Sky Room.

Davis, a graduate of Harvard Law School, served in the Texas Senate from 2009 to 2015 where she represented Fort Worth’s senate District 10. Prior to that she was elected to the Ft. Worth City Council in 1999 where she served nine terms.

As a state senator, Davis first came to prominence 2011 when she filibustered a budget bill that cut $4 billion from public education funds, requiring then-Governor Rick Perry to call a special session.

However, it was another filibuster in 2013 when Davis became a national sensation. In that instance, Davis fought to block Senate Bill 5 a stringent proposal that banned abortions after 20 week of pregnancy, required abortion clinics to meet the standards of hospital surgical centers and mandated physicians who performed abortion to have admitting privileges at nearby hospitals.

The filibuster went on for 11 hours with Davis and her Democratic allies delaying the bill beyond the midnight deadline that marked the end of the legislative session. Ultimately, Senate Bill 5 passed in a second session.

Groups like Battleground Texas and Emily’s List encouraged Davis to run for governor, which she did in 2014. She lost the race to the Republican nominee, then-Attorney General Greg Abbott who garnered 59 percent of the vote.

During her gubernatorial run, Davis told the Texas Observer she considered the LGBT community as critical to her campaign.

“It’s been tremendously important, and it will continue to be. I’ve received some widespread support both through volunteer hours and through donations to the campaign, and what I see on the ground as I’m traveling around the state is an excitement and enthusiasm for this race by members of the LGBT community in a way that probably hasn’t presented itself for a long time. I think they understand and see that they have someone who’s a champion for them, and I’m really proud and feel privileged to have that support,” she told the Texas Observer.

In addition to Davis’ appearance at the Spirit of Texas Brunch, Equality Texas announced it will present awards to state Senator Jose R. Rodriguez, Judge Phyllis Randolph Frye and Google. Emcee for the event is Micki Gamez, an on-air personality at IHeart Radio.

Mayor Ivy Taylor remains an unpopular figure in San Antonio's LGBT community, having voted against the city's nondiscrimination ordinance in...