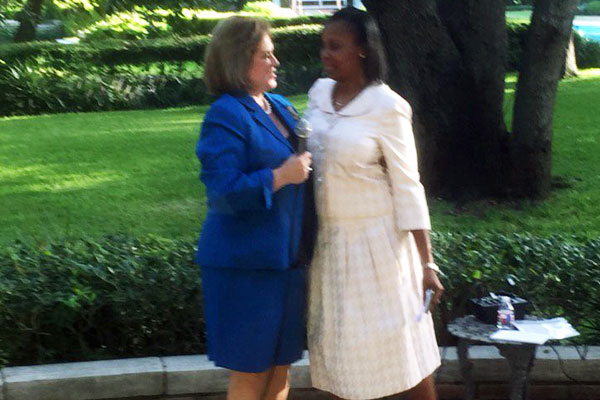 Mayor Ivy Taylor remains an unpopular figure in San Antonio’s LGBT community, having voted against the city’s nondiscrimination ordinance in 2013 saying, “I have sacrificed a lot to serve in this role on city council, but I will not sacrifice my core values and religious beliefs for political gain or to be in alignment with a particular platform.”

Most recently, the mayor was booed and jeered when she attended a vigil held in Crockett Park on June 16 to commemorate the slaying of 49 people at the Pulse nightclub in Orlando, Florida. At her appearance, the mayor offered a prayer but never specifically mentioned the LGBT community.

So it was a great astonishment to many San Antonio LGBTs when they learned former state Sen. Leticia Van de Putte, long considered an ally, expressed support for Taylor at a fundraiser on September 7.

In a report in the San Antonio Current, editor Michael Barajas writes, “. . . some might be surprised that Wednesday afternoon, at a private event to support Taylor’s run for a second full term, Van de Putte introduced the mayor this way: ‘The voters got it right.’ A consultant who worked on Van de Putte’s mayoral race (who word has it is now working for Taylor’s campaign) tweeted a photo of the two former rivals with the quote, which Taylor then shared with her followers, adding that she was ‘incredibly grateful and humbled’ by Van de Putte’s support.”

The move has left many puzzled. Van De Putte has been a long-time champion of LGBT causes. She participated annually in the Pride Parade. While in the state senate, she sought and got the endorsement of the Stonewall Democrats of San Antonio every time she ran for re-election.

When news of Van De Putte’s endorsement reached social media, there were expressions of surprise and anger. In a post on Facebook, LGBT political activist Dan Graney wrote, “I have lost all respect for LVP!” adding that perhaps she hoped to “land some lucrative consultant contract with the city.”

In another Facebook post, Darrell Garcia Parsons writes, “When these two were running against each other, I publicly stated that I didn’t trust either one of them. They both broke their promise to not run for Mayor. Now it looks like they’re playing the game of ‘you scratch my back, I’ll scratch yours.’ My gut instincts about LVP were not wrong.”

In November 2015, Van De Putte and former Texas Secretary of State Hope Andrade started a consulting firm which will “concentrate on connecting business clients with government officials,” according to the San Antonio Express-News.

The senator’s run for mayor

When she decided to run for Mayor of San Antonio last year, Van De Putte sought the Stonewall endorsement but did not get it. Instead, the endorsement went to her primary opponent, former state Rep. Mike Villarreal who also has been a strong ally to the LGBT community.

One source told Out In SA at the time that it was Van de Putte’s response to one of the questions on the Stonewall questionnaire that led many to support Villarreal.

The question asked if the candidate supported a city-wide employment nondiscrimination ordinance. Van de Putte answered “no” and qualified that answer by saying that the city must focus on its “primary mission,” going on to say that “the power of the pocket book” would ferret out businesses that discriminate.

In an interview earlier that year with Out In SA, Van De Putte dodged the same question by answering, “In the best of all possible worlds wouldn’t this be something that we want throughout our state and throughout our country so that people are treated with dignity and respect? It ought to be your skill set at the job site not who you love. I think we have to look at what’s on the books now [the NDO] and make sure it’s implemented. We have to make sure that works before we go on to the next step.” In the end, Villarreal and Van De Putte’s dueling candidacies ended up splitting the LGBT vote. Van De Putte made it past the primary and went on to lose the election against Taylor in a nasty campaign. At one point, Taylor refused to shake Van De Putte’s hand after a testy exchange during a debate.

Depends on the goals

In a telephone interview with Barajas, “Van de Putte said she’s decided to officially endorse Taylor because of the mayor’s many accomplishments within her first term — particularly, she said, the brokering of a police union contract . . .”

“Grownups know that a lot of things are said and done in a campaign,” Van De Putte told Barajas. “Come on, Barack Obama asked Hillary Clinton to be Secretary of State. We’re grownups. How many times in business do you have adversaries that become your business partners? Politics is no different. You look at what your end goals are.”

“I’m glad to have received the support of Leticia Van De Putte and to be able to say that we have shifted our focus on moving the city forward. She recognizes the huge strides San Antonio has made in many areas and wants to be part of our continued progress,” Taylor said in a statement to the Express-News. “This is a great example of how San Antonio writes its own story. We do not and will not let history or politics dictate our future. San Antonio is a city that roles up it sleeves and gets to work.”

Even though no one else has officially declared their candidacy for mayor, City Councilmen Ron Nirenberg and Rey Saldaña are expected to run. Both are very popular with LGBT voters and could certainly give Taylor a run for her money with this constituency.

Texas Forest Country Weddings in Huntington, Texas is a venue that has everything you could want to throw the perfect...