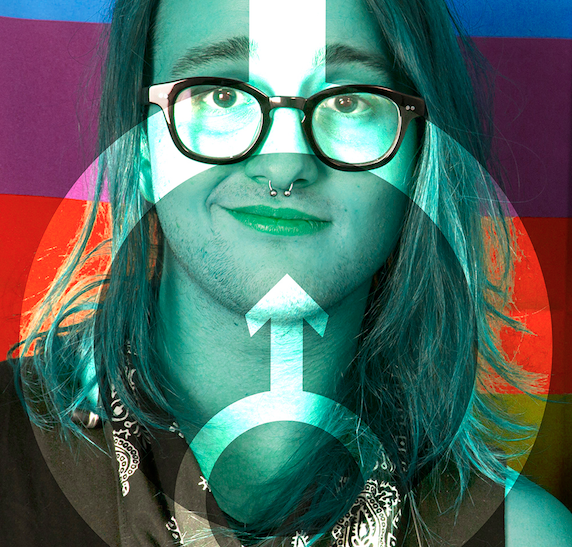 “I know what it’s like on both sides of the fence.”

You know what I miss the most about having breasts? People offering me free drugs (also: nipple sensation).

I was born genetically female, and I lived that way for 16 years. By the time I was 17, I realized I wasn’t comfortable with this body, this voice, these breasts. I wanted to be masculine—I wanted to be a man. It’s difficult to articulate how it feels to be treated as somebody different than who you feel you are inside—to feel that so strongly and to have none of your invisible desire to be somebody else recognized. Every social interaction chipped away at my identity. I felt like I was screaming into a void, but nobody even noticed that my mouth was open.

So I decided it was time for my body to match my identity. I got my first binder—a tight-fitting garment that flattens the breasts—a month after I turned 17. A week before I turned 18 I was on hormone-replacement therapy. A year later, two weeks after I turned 19, I went to Fort Lauderdale and had my top surgery.

Suddenly, dudes stopped offering to smoke me out or give me this extra Xanax that they “just had laying around.” Because I went from being perceived as female to being perceived as male almost overnight. It was sheer bliss, and it did wonders for my self-esteem and desire to live (suddenly I had one).

I also discovered that I had inherited something very valuable—male privilege.

I could ride my bike without being harassed and walk around downtown at night in short shorts without lewd comments. I could show up to most places smelling and looking like shit and nobody would say anything. When I was a girl, I would ride my bike and get shouted at; men would stop and offer me a ride if I was walking with a backpack on. All of a sudden, men stopped approaching me and attempting to barter for my attention with objects (drinks, drugs, coffee, etc.).

For a brief period after my surgery, I felt isolated and alienated. Socializing was always difficult for me, but at least when I was a girl it was more likely that someone would talk to me. Then I realized that I was finally able to be alone—I had the privilege of social invisibility, and I could exist in public without comment. I could walk alone at night and be in a bar without fear (unless I’m perceived as homosexual, then I experience discrimination). I can exist in public without a man feeling entitled to my attention.

The thing with privilege is that it’s subtle—to the point where I’ve almost forgotten how it was to be perceived and treated as female. I had lived as a girl for 16 years, in a gray area of confusion for three, and for the past three I have lived openly as a male, so my experiences are limited in some ways—but that doesn’t mean I have forgotten, or that I take my newfound freedoms lightly.

I know that women are not treated fairly—that people automatically assume that a woman is less informed or less in charge than her male counterparts. I recognize that women’s opinions are often devalued, as if a person is intellectually inferior simply because she has a vagina. I see that women are constantly being judged—if a woman wears too much makeup, she’s a harlot or she’s ugly; she shows up sleepy and in sweatpants, people ask her what’s wrong.

I am also keenly aware of how lucky I am that my maleness has given me the ability to burp and spit and look how I want and behave how I want without (much) judgment. But my experience has given me a rare perspective—as somebody who’s been perceived as both a cis-woman and a cis-man, I know what it’s like on both sides of the fence. We’re a culture in transition (if you’ll excuse the pun), in terms of how we perceive people based on gender, and the first step in any transition is awareness.

But I don’t miss people telling me that I “couldn’t” do things—instead of, “Oh no, honey, you can’t do that!” I get, “Hey, don’t do that.” It seems like a minor difference, but it’s often the little details that construct the foundation of the gender gap that we need to bridge.

Overall, I’m stoked to be without my breasts. Going for a jog is so much easier without them, and despite the fact that people don’t try to give me free stuff anymore for no reason other than the fact that they were attached to my chest, I don’t miss them.

I do miss the convenient storage they provided, though—boobs are the best pocket ever. Store your money, phone, weed and a lighter. Who needs a purse when you’ve got a sizable rack?

In an October 15 letter to their congregants, the leaders at the First Presbyterian Church of San Antonio recommended leaving...