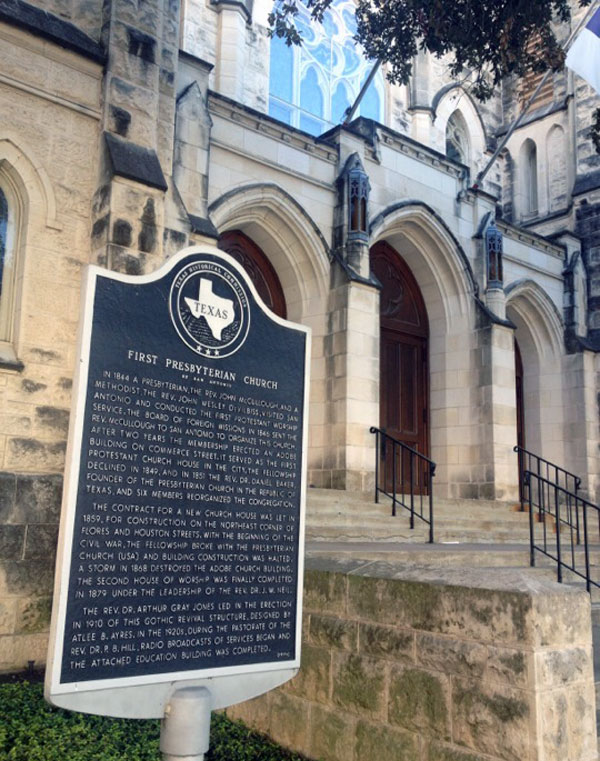 In an October 15 letter to their congregants, the leaders at the First Presbyterian Church of San Antonio recommended leaving the Presbyterian Church (USA) because, “We believe our denomination is not what it once was, and it has wandered from its biblical and confessional moorings.”

The letter goes on to say, “Ultimately, after years of prayer, discussion, and input from our members, on October 12, 2015, the Session of FPC voted to recommend to the congregation that we leave the PC(USA) and join the ECO: A Covenant Order of Evangelical Presbyterians—a rapidly growing Reformed Presbyterian denomination.”

1) Authority of scripture – “An increasingly permissive structure has generated many examples of church leadership wandering from the Confessions and basic Biblical principles.”

2) Political activism – “A number of years ago the PC(USA) began to classify their social justice and political initiatives as mission work . . . Whether one is for or against these causes, the question is—Is this the appropriate focus of time and money for the Church?”

3) Dramatic membership decline –  Advocates for disaffiliation say the progressive changes in church doctrine have led to a decline in membership. “In 1967, the combined membership of the two pre-cursor denominations was over 4.2 million. After merging in 1983, the total was 3.1 million. In 2014 membership dropped to 1,667,767 members.”

4)  Human sexuality and redefinition of marriage – “. . . in 2014, the GA changed the definition of Christian marriage from being between ‘a woman and a man’ to between ‘two people.'”

The change in the definition of marriage left open the option for individual congregations to decide whether or not they would allow same-sex marriages. Last February, First Presbyterian adopted a wedding policy which “reaffirms and restates the views of this church that marriage is between one man and one woman.”

First Presbyterian and other congregations in the denomination began to express dissatisfaction in 2011 when the Presbyterian Church (USA) voted to change its constitution and allow openly gay and lesbian people in same-sex relationships to be ordained as ministers, elders and deacons.

It was around that time when the Covenant Order of Evangelical Presbyterians was established to unify congregations that wanted to disaffiliate because they were at odds with new church teachings.

Leaving the mother church will require a vote by at least ten percent of First Presbyterian’s 2,100 members. The vote is set for Sunday, November 1.

The San Antonio Express-News reported on October 13 “. . . state District Judge John Gabriel denied a request for a temporary injunction by First Presbyterian, which had sought an order to prevent Mission Presbytery from asserting control of any of its property while it decides whether to leave. But the judge also denied the Presbytery’s request, joined by a group of intervenors, for an order preventing the church from claiming all its property if it does leave.”

Students from two Trinity University organizations are preparing to break out the glitter and feathers for a benefit drag show...