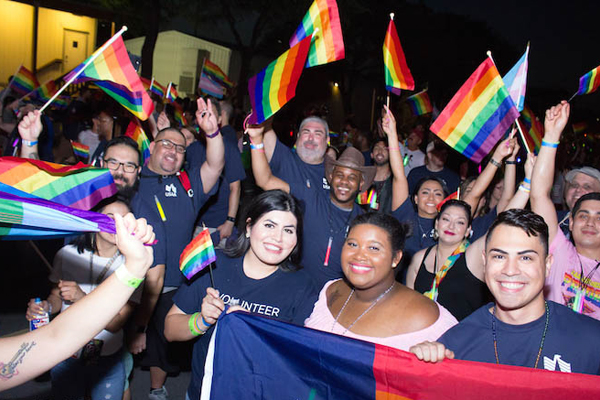 A select month-by-month recap of stories about our community reported here and elsewhere in 2017. Stonewall Democrats of SA elect new leadership
The Stonewall Democrats of San Antonio elected a new slate of officers at their monthly meeting on Monday, January 16. Heading up the board of directors are new co-chairs Ellen Stephens and Chris Forbrich. Carolee Moore, a former co-chair, now serves as secretary. Esperanza Center celebrates 30-year anniversary
The Esperanza Peace and Justice Center celebrated its 30th anniversary, continuing to push for social justice in San Antonio, fighting for equal treatment of women, people of color, LGBTs and working-class members of the community. LGBTs stage walk-out at WOAI debate on bathroom bill
WOAI’s Randy Beamer tried to host a “town hall” on Texas Senate Bill 6, the anti-trans bathroom bill. After about 15 minutes of discussion, LGBT activists and allies had heard enough, stood up and walked out of the Tobin Center during the live broadcast leaving the auditorium nearly empty.

For Gene Elder, getting arrested is making art
Artist, activist and Out In SA columnist Gene Elder says his arrest last summer in Alamo Heights, where he where he was charged with interfering with an arrest and resisting arrest, was his way of making art. District 2 council candidates support the NDO
Four years ago, when Mayor Ivy R. Taylor was still the City Councilwoman for District 2, she said her vote against the nondiscrimination ordinance reflected not only her beliefs but also those of her constituents. However, once Taylor became mayor her statement proved to be untrue considering that all of the leading candidates who have since sought the District 2 council seat have supported the NDO without political repercussions.

David’s Law signed by governor
A law aimed at preventing and combating cyber-bullying was signed by Texas Governor Greg Abbot after receiving a majority of votes in the House of Representatives and an unanimous vote in the Texas Senate.

SAGA endorses Montaño in District 1 runoff
The San Antonio Gender Association announced on May 13 that it was endorsing Michael Montaño in the race for the City Council District 1 seat. Montaño was facing a June 10 runoff against incumbent Councilman Roberto C. Treviño who went on to win the election. Civic groups team up to register voters at SA Pride events
The Stonewall Democrats of San Antonio organized a group of over 45 volunteers from four local civic organizations to register voters during the Pride Bigger Than Texas Festival and Parade on Saturday, July 1. Activists paint rainbow crosswalks in chalk on Main Avenue Strip
Just hours before the Pride Bigger Than Texas Parade stepped off on July 1, local LGBT activists painted rainbow crosswalks at the intersection of North Main and East Evergreen. The effort, dubbed Pride 2017 Chalk It Up, was organized by local attorney Rosie Gonzalez who urged volunteers to “go buy all the rainbow chalk in town.”

Adelina Anthony premiers new feature on PBS Online Film Fest
San Antonio native and actor, playwright, director Adelina Anthony premiered her newest film in July as part of the 2017 PBS Online Film Festival. Amigas with Benefits, which Anthony wrote and directed, unfolds in a nursing home in Southern California where the wedding of two older lesbians is interrupted by one of the women’s daughter who opposes the union. Gina Ortiz Jones runs for District 23 congressional seat
Democrat Gina Ortiz Jones was the first Democrat to announce her candidacy for the Texas 23rd Congressional District seat currently held by Republican Rep. Will Hurd. Jones is a native of San Antonio, an Air Force veteran, a former member of the National Intelligence community, and an out lesbian. Eric Alva marries Danny Ingram
In a ceremony on September 21 at the Bexar County Courthouse, retired Marine Staff Sergeant Eric Fidelis Alva married David Daniel (Danny) Ingram, an Army veteran and former technical analyst at the Georgia Institute of Technology. The couple was wed by Judge Genie Wright with a small group of friends and family present to witness the ceremony.

Three from SA community chosen for research leaders program
Three professionals from San Antonio’s LGBT community were chosen to participate in a leadership development program being led by the University of Minnesota and underwritten by the Robert Wood Johnson Foundation. Dr. Amy Stone, Dr. Phillip Schnarrs and Robert Salcido will work on a research project with the theme, “Building a Stronger Community: Resilience Among LGBTQ+ People in South Texas.” City of SA stands behind trans employees
Officials from the City of San Antonio released statements in support of the city’s transgender employees after U.S. Attorney General Jeff Sessions issued a memo reversing a Justice Department policy that protected trans workers from discrimination under federal law. Rosie Gonzalez announces run for judge
In a brief announcement on November 16, local attorney Rosa Maria “Rosie” Gonzalez threw her hat into the upcoming Democratic primary for Judge County Court at Law No. 13.“It’s official. I’m in,” Gonzalez told friends and associates who gathered to hear her announcement.

USAA and Racskpace Score 100 on Corporate Equality Index
The Human Rights Campaign Foundation released the results of its 2018 Corporate Equality Index on November 10. Of the seven companies ranked in San Antonio, two companies, the United Services Automobile Association (USAA) and Rackspace received a score of 100. This is the second year in a row USAA has received a perfect score.

Man indicted in death of SA transgender woman
Mark Daniel Lewis was indicted by a grand jury in connection with the death of Kenne McFadden, a San Antonio trans woman whose body was found in the San Antonio River last April. San Antonio vows to end AIDS by 2030
San Antonio became the first city in Texas to sign onto Fast Track Cities, an international initiative to eradicate AIDS by 2030. Mayor Ron Nirenberg signed the measure on November 30, the day before World AIDS Day.

Dallas sheriff, an SA native, to run for governor
Dallas County Sheriff Lupe Valdez announced her run for Governor of Texas in the Democratic primary. Valdez, who was born in San Antonio, is one of only one of a few female sheriffs in Texas, the only Hispanic female sheriff and the only openly-lesbian person to hold the office.

Originally published in the San Antonio Current. As we prepare to bid farewell to a year riddled with chaos and...