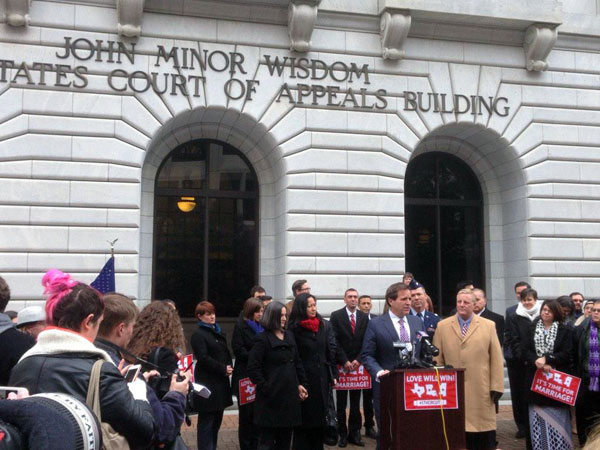 The U.S. Court of Appeals for the 5th Circuit in New Orleans held center stage today while it heard appeals of same-sex marriage cases from Texas, Mississippi and Louisiana.

The three appeals were heard by Judge Jerry E. Smith (a Reagan appointee), James E. Graves (an Obama appointee) and Judge Patrick E. Higginbotham (another Regan appointee), who is considered the swing vote on the panel.

There were 11 couples represented in the three cases.

In the Louisiana hearing, which was the first of the cases heard, the Times-Picayune reports that Graves and Higginbotham, “asked skeptical questions about the state’s position in defense of the ban, barely letting attorney Kyle Duncan conclude his opening remarks.”

Camilla Taylor, the lawyer representing the Louisiana same-sex couples challenging the ban told the Times-Picayune she was “very relieved, and very optimistic.”

Based on tweets from reporters on the scene, the hearings for Mississippi and Texas appear to have followed the same track with the judges appearing skeptical of each state’s arguments.

After the Texas hearing, Chris Geidner, a reporter for Buzzfeed, tweeted: “TX was no different. If anything, Judge Higginbotham was getting a bit frustrated with Judge Smith’s constant focus on Baker.”

In a later tweet, Geidner wrote: “The 5th Circuit, after 3 hours of args, appears poised to strike down LA, MS, & TX same-sex marriage bans. I expect a 2-1 vote.”

The Texas plaintiffs, Vic Holmes, Mark Pharris, Cleopatra DeLeon and Nicole Dimetman, smiled and posed for photos outside the 5th Circuit building after the hearings. “Vic and I know we are on the right side of history, and the right side of the law,” Pharris tweeted.

Several media outlets including The New Civil Rights Movement were predicting that the judges would strike down all three bans based on tweets from news reporters on the scene.

Recordings of the oral arguments in the three cases will be available at this link.

Many believed the cases heard today would be the last before the Supreme Court decides the issue. However, on January 9, the justices delayed action on whether to rule this year on states’ remaining bans against same-sex marriage.

There is no time frame as to when the judges from the 5th Circuit will announce their rulings. However, attorney Neel Lane of Akin Gump who represents the Texas plaintiffs, recently told the Texas Observer that the state would have marriage equality by Easter.

This evening, Marriage Equality USA will host a national conference call that will feature local and national legal experts discussing what happened in the courtroom not only with the Texas hearing but in the Louisiana and Mississippi hearings as well. The call is at 8 p.m. Central Time and is open to the public. Use this link to RSVP.

Tonight in San Antonio, several LGBT organizations are planning “a peaceful show of solidarity and support” at 5:30 p.m. on the steps of the Bexar County Courthouse.

A program from the local branch of the Spay-Neuter Assistance Program (SNAP) is offering free and low-cost veterinary services to...