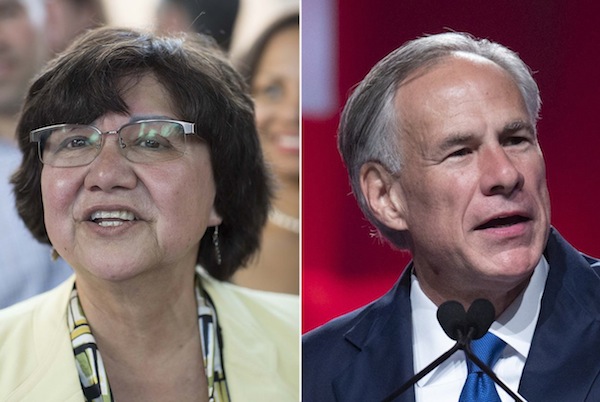 Gov. Greg Abbott has accepted an invitation from a TV station group to debate Democratic opponent Lupe Valdez on Sept. 28 in Austin — and she says she’s “in” but doesn’t sound sold on the specifics yet.

The Republican governor’s campaign made the first move Wednesday evening, announcing it had agreed to a debate request from Nexstar Media Group. Valdez, the former Dallas County sheriff, responded a short time later in a tweet that took issue with the debate’s timing — a Friday evening in the middle of high school football season.

“Thanks @GregAbbott_TX for accepting a debate!” she wrote. “We’re in and always happy to discuss our vision for a Texas that works for all. We haven’t agreed to the terms yet – but seriously, during Friday Night Lights? [football emoji] Texans deserve better. Call me, maybe?”

The debate would take place from 7 to 8 p.m. at a yet-to-be-determined location, according to Abbott’s campaign. Nexstar would carry the debate on its 12 stations across Texas as well as partner stations in Dallas, Houston and San Antonio. It would also be broadcast online.

“A statewide debate that allows voters to hear directly from candidates on what they believe is essential to the democratic process, and Governor Abbott looks forward to this opportunity to share his vision for the future of Texas,” Abbott spokesman Alejandro Treviño said in a statement. “We look forward to our opponent accepting this invitation to discuss the critical issues on the minds of Texans, and we thank Nexstar Media Group for their generous offer to host this debate.”

After winning her party’s nomination in May, Valdez said she was more than willing to debate Abbott.

“Abbott agrees to debate with Valdez, who says, “Call me, maybe?”” was first published by The Texas Tribune, a nonprofit, nonpartisan media organization that informs Texans — and engages with them — about public policy, politics, government and statewide issues.

PLASTIK Collective Parties Are a Haven for the Alternative Queer

When some friends invited me to check out this party called Glitter Baby, I thought, “My old gay ass don’t...