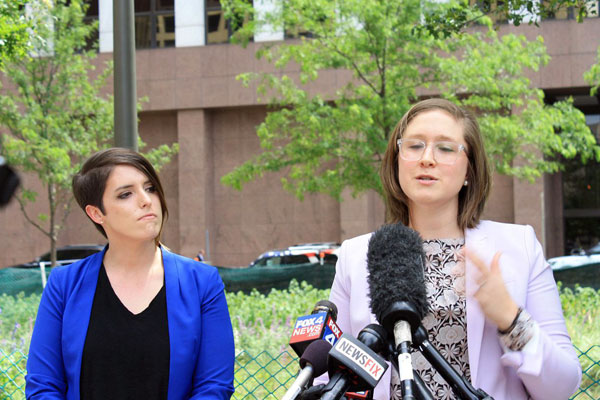 As part of the settlement, the school district agreed to provide mandatory training to human resources and counseling staff on LGBTQ issues in schools, and to require its board of trustees to vote on whether to add protections for sexual orientation into its policies.

By Naomi Andu, The Texas Tribune

Arlington art teacher Stacy Bailey was placed on administrative leave in August 2017 after showing her students a picture of her soon-to-be wife. On Monday, Mansfield ISD awarded Bailey $100,000 after a federal judge ruled her suspension was unconstitutional.

As part of the settlement, the school district agreed to provide mandatory training to human resources and counseling staff on LGBTQ issues in schools, and to require the Mansfield ISD board of trustees to vote on whether to add protections for sexual orientation into its policies, according to a representative for Bailey.

At a Tuesday press conference in Fort Worth, Bailey thanked Mansfield ISD President Karen Marcucci for showing leadership in going beyond a traditional monetary settlement to pursue training and policy changes.

But Mansfield ISD still denies any wrongdoing and maintains that Bailey was not placed on leave for showing family pictures, according to a statement from Donald Williams, the district’s associate superintendent of communications and marketing.

“All parties deny any wrongdoing or liability, but wish to resolve their disputes to avoid the time, expense, stress and other impacts of continuing litigation, which would interfere with the mission of educating the students of MISD,” the statement reads.

The school district also agreed to withdraw the “administrative leave” designation from the eight-month period that Bailey was suspended and provide her with a letter of recommendation.

Before her suspension, Bailey worked at Charlotte Anderson Elementary School for a decade and was named teacher of the year twice. When a parent complained that she was “promoting the homosexual agenda” by showing students a picture of her partner, Julie Vazquez, Bailey was abruptly placed on leave.

“What happened to me is most gay teachers’ worst nightmare,” Bailey said Tuesday. “Why aren’t straight teachers afraid to talk about their families? Why do they feel comfortable to have a picture of their family on their desk without questioning their safety?”

Because Texas has no law that explicitly protects against discrimination based on sexual orientation — only that based on sex, race, religion and disability — Bailey sought relief through the federal court system. After two years of litigation, Judge Sam Lindsay of the U.S. District Court for the Northern District of Texas ruled in her favor in October.

The Mansfield Equality Coalition has championed the issue of LGBTQ-specific protections in the school district since 2018. The vote to include LGBT protections in the school district has been delayed while it waited for a U.S. Supreme Court decision on a related case, according to Bailey’s attorney Jason Smith. The court heard the case, which called into question whether the sex discrimination protection in Title XII of the Civil Rights Act also encompasses sexual orientation and gender identity, in October. Ultimately, multiple justices said it was a matter for Congress, not the courts.

Now Bailey teaches at Lake Ridge, a high school in the district. She said she’s promised her students she won’t leave before they graduate. But she said she misses her former students and doesn’t know what the future holds.

“If you are a school district who thinks you can bully and shame a gay teacher out of their job, I hope you remember my name,” Bailey said, “and I hope you think twice.”

When Texas Republican voters go to the polls for the March 3 primary election, they will have the opportunity to...