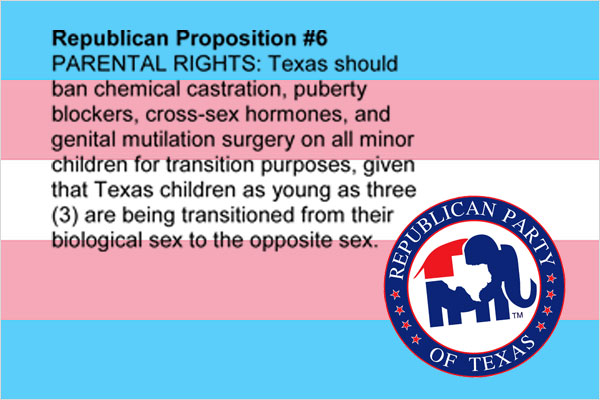 When Texas Republican voters go to the polls for the March 3 primary election, they will have the opportunity to reply to 10 propositions including one that seeks to control the rights of parents with transgender children.

The GOP’s proposition raises false alarms about what some have inferred to be the abuse of transgender children through, among other things, “genital mutilation surgery.”

The full text of the proposition reads as follows:

6.) Texas should ban chemical castration, puberty blockers, cross-sex hormones, and genital mutilation surgery on all minor children for transition purposes, given that Texas children as young as three (3) are being transitioned from their biological sex to the opposite sex.

Proposition 6 is the most recent volley by right wingers against the transgender community in Texas. In 2017, the Texas Legislature debated the passage of a bathroom bill which would have required transgender adults and children to use bathrooms in public schools, government buildings and public universities based on their biological sex. The bill died during a summer special session.

The latest round of Republican pearl-clutching is prompted by a recent custody case in Dallas. Last October, the mother of a transgender girl was accused by her ex-husband of manipulating the child into believing she was a girl. He said his ex-wife was pushing the child to undergo medical transition. The judge in the case ruled both parents will have equal say in their child’s medical care, and that they will attend mandatory counseling. 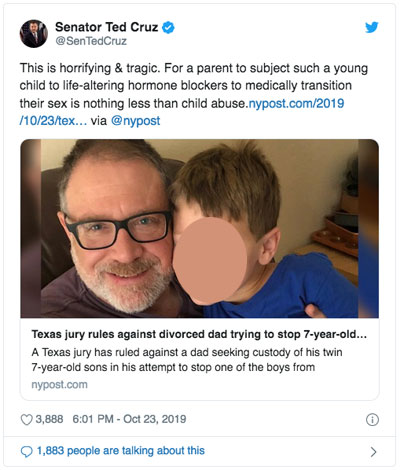 The case piqued the attention of state GOP politicos including Texas Gov. Greg Abbott, First Assistant Attorney General Jeff Mateer, and Sen. Ted Cruz who said via Twitter that the case was “horrifying and tragic.”

“For a parent to subject such a young child to life-altering hormone blockers to medically transition their sex is nothing less than child abuse,” Cruz tweeted.

Since the custody case came to light, right wingers have been clamoring for a law to prevent children from being “sterilized and mutilated at any point in their life.” Doctors and transgender activists, say the GOP’s protests are moot. An article in the Texas Tribune reports:

In reality, experts say, the transition process for prepubescent children does not involve medical intervention; instead, it consists of social affirmations like allowing children to wear the clothes they like, employ the names and pronouns they prefer, and paint their nails if they choose. During puberty, a transgender child might, with the consultation of a doctor, begin to take puberty blockers, reversible drugs that can stop puberty and the gender markers that come with it, like a deepening voice, the development of breasts or starting a period. Later on, experts say, transgender young adults might explore the option of surgery.

“Children in Texas are already robustly protected by the Texas Family Code and medical rules of ethics,” said Brian Klosterboer, an attorney at the American Civil Liberties Union of Texas, said in a statement. “No one in Texas may harm a child, including parents and medical professionals.”

In commenting on the Dallas custody case, Angela Hale, who at the time was Acting CEO of Equality Texas, said in a press release, “Politicians have no business delving into people’s private lives and exploiting them for political gain. It is absolute hypocrisy. Those who falsely claimed they cared about privacy during the bathroom bill are now turning around and violating this child’s privacy in the news media and on social media, rather than trying to understand the facts of the case.”

“We encourage people who care about the welfare of the child to educate themselves about the facts rather than relying on intentional misinformation about what it means for a young transgender child to be affirmed,” Hale added.

Originally published in the San Antonio Current. Until recently, the local artist duo Dos Mestizx was perhaps best recognized for...