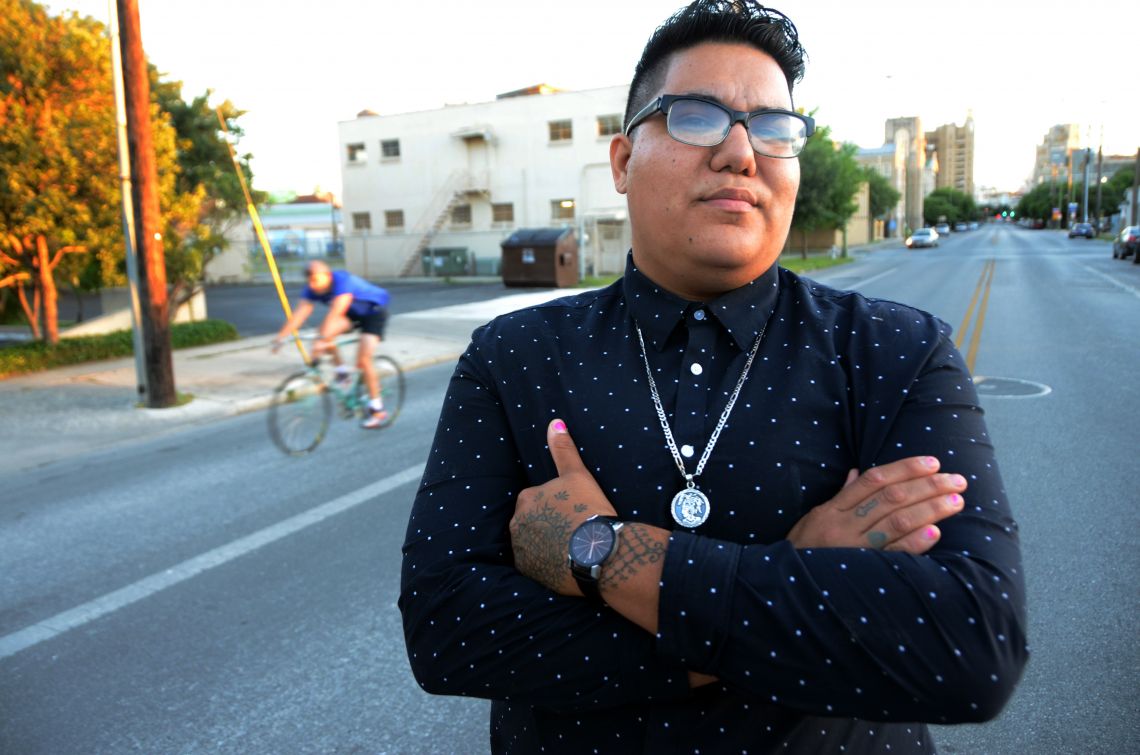 It’s not exactly a surprise that Alyson Alonzo names Billie Holiday and Ella Fitzgerald as some of her main musical influences. With a voice as big as the legends that inspired her, the 30-year-old, openly gay musician has become a well-known name in San Antonio’s indie-music circuit. From killing her set at Maverick Music Festival last year to receiving a standing ovation for her cover of Radiohead’s “Lucky” with the youth orchestra YOSA at the Tobin Center, Alonzo is proving to be one of the most noteworthy local artists on the rise. On her debut solo EP The Romantic, released in early May, the singer pulls listeners through indie-pop-soaked R&B tracks layered with lush vocal harmonies and lyrics that might make you ponder decisions you’ve made with your own love life. If this is any indication of things to come, we shall wait with baited breath. We recently caught up with Alonzo at Press Coffee to talk about The Romantic and get a glimpse into the world of one of the Alamo City’s most unique voices.

So how long have I been gay?

Sure, how long have you been gay?

I came out of the closet in my early 20s … I wasn’t one of those high school gays … And it was really weird ’cause I talked to boys on the phone but I didn’t like ’em. You know what I mean? I had internet boyfriends but I didn’t have boyfriend boyfriends … I almost slept with a boy once.

Yeah, I kept dating this girl ’cause she said she was gonna get me this Timbaland & Magoo CD.

She never did or what?

Well, I broke up with her before she did. I felt bad ’cause I didn’t actually want to date her.

Haha, well now you can just get yourself that CD … you don’t need to sacrifice your …

I almost had sex with a guy once … but he didn’t have a condom … It was that close … I could’ve been someone’s baby mama with one wrong decision.

You were born and raised here right?

Mmhmm, on the Southside. I went to McCollum … I went to Incarnate Word [High School] for one year, during my freshman year, but left two months before the end and went back to the Southside … I got back into athletics, which is what I was always into.

What sports did you play?

I played basketball and I did certain events in track and field … mostly the butch ones like shot put. I payed basketball from like, kindergarten up to my sophomore year of high school, when I broke my ankle. And then they benched me, so I quit and got really into theater … and that’s how I got into doing sound and lights.

Were you singing the whole time you were in school?

’Cause they were awful, and they weren’t good at singing. As shitty as that sounds …

So how did you get into singing? Did someone just tell you, “Hey, you can sing”?

My grandfather recorded me singing “America the Beautiful” and he played it for my grandma, my mom and all my cousins on a loud-ass speaker, and I hid inside a refrigerator box ’cause I couldn’t stand the sound of my own voice. How old were you?

I was like 6 or 7, but my grandpa was like, “She can sing, she sounds unique.” … I was in choir in elementary school ’cause I really liked music, and played piano from the age of 5. I used to write poems and turn them into songs as a teenager, but I didn’t think that I could sing, so I just didn’t do anything with it … When I graduated from high school, I wanted to be an editor for short films, and was really into filmmaking towards the end of high school. My parents bought me this Mac and it came with GarageBand, so I started making music and putting it on Myspace … just shitty loops from GarageBand that I mixed up together … I started working with this one producer from South Africa, and he was really good … We started collaborating … I would send him my loops and he would make them better, and then he said “Well, you’re a girl, and girls have nice voices, so you should sing on this. So he sent me some loops and I added it to a song of mine, and it was actually good.

So, some random dude from South Africa, who could’ve asked you for a million dollars told you you could sing?

So, this scammer took …

The scammer took me out of my music closet.

What year was this?

What kind of music were you playing when you started doing shows?

I was playing with a guy named Omar Nambo. He’s fucking talented and was one of the original members of Piñata Protest. Before that I was practicing with this one band Fin Del Mar, but they broke up before I actually played a show with them. Were you just singing in these bands?

Yeah, and then I was doing electronic music with Ill Prospect, but it didn’t work out. Then I met Jeffrey Palacios and we did Vincent Vega, which turned into Sugar Skulls. And then Jeffrey just got in four other bands; and I’m busy too, so we just stopped making music together.

So tell me about this EP. Was this your first solo release?

Yeah, and it’s all me. All the beats and electronics are me, the vocals are me. I recorded in a few different studios, but the final version is from RTE Studios with Nick Pacheo.

What’s been the biggest challenge pursuing music as a career?

Well, in the beginning, people didn’t want to pay me or … give me the time of day. It’s hard to be taken seriously professionally as a woman if you don’t have a male counterpart. And it’s really sucky to say that out loud, but it’s fucking true … That’s why I have to be a lot more assertive than I used to be. It even took a lot for me to ask for a guarantee. And I just started doing that two or three years ago. A lot of people don’t want to pay [artists], they want to pay [them] in food or booze … I’m sorry, but that doesn’t pay my fucking phone bill or my rent.

What advice would you give to the young queer performer trying to come up in San Antonio?

Don’t stop playing shows. Write until you have writer’s block and then keep writing some more after that. Don’t stop. ’Cause the minute you stop and start doubting yourself is the minute you stop making music. And if you think you’re meant to be on this planet to make music, then you should do it — ’cause we don’t have that long here anyway.

By Alexa Ura, The Texas Tribune July 20, 2017 As the Texas Senate prepares to consider legislation to restrict bathroom...