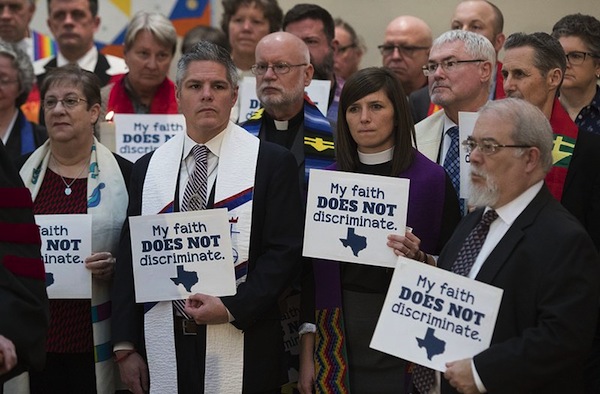 Faith leaders from around Texas gathered at First United Methodist Church near the Texas Capitol as the Texas Believes coalition on Feb. 9, 2017. The group was opposing several upcoming anti-LGBT bills and rejecting the use of faith as a political weapon to justify discrimination. (Photo: Bob Daemmrich for The Texas Tribune)

As the Texas Senate prepares to consider legislation to restrict bathroom use for transgender Texans in legislative overtime, the national Episcopal Church is renewing its opposition to such proposals.

Citing the “emotional and spiritual damage that discrimination does to transgender people,” top leaders of the national church — Presiding Bishop Michael Curry and the Rev. Gay Clark Jennings, president of the House of Deputies — in a letter to House Speaker Joe Straus urged the speaker to remain “steadfast” in his opposition to any bathroom bill.

“As the presiding officers of the Episcopal Church, we are firmly opposed to ‘bathroom bills’ and particularly reject the idea that women and children are protected by them,” the two high officials wrote. “As clergy who remember racist Jim Crow bathroom laws that purported to protect white people, we know the kind of hatred and fear that discriminatory laws can perpetuate.”

The letter, dated July 19, was received just before a Senate committee is set to consider two measures that would restrict bathroom use in government buildings and public schools based on the sex listed on a person’s birth certificate — a proposal that would keep most transgender Texans from using bathrooms that match their gender identity.

The Senate’s proposal would also nix parts of local nondiscrimination ordinances meant to allow transgender residents to use public bathrooms of their choice. (Similar proposals have been filed in the House.)

Straus — who has been vocal in his opposition to bathroom regulations for transgender Texans — was instrumental in keeping similar proposals from advancing in the regular legislative session that concluded in May.

The issue has been a top priority for Lt. Gov. Dan Patrick, who has leaned heavily on segments of the faith community in his fight for bathroom restrictions. Months ago, Patrick enlisted conservative pastors to help advocate for the bathroom restrictions in their congregations. They’ve been in the minority of individuals who testified in favor of those proposals during the regular session.

Patrick and other proponents of the legislation have cited concerns about privacy and misuse of trans-inclusive policies by sexual predators. But they’ve provided virtually no evidence of such cases.

While he was largely absent from the bathroom debate during the first half of the year, Gov. Greg Abbott in May confirmed that he urged pastors to pressure the Texas House and help build support for the measure as it languished in that chamber.

Other faith leaders have echoed the Episcopal Church’s concerns about bathroom restrictions. About 50 church leaders protested outside the Texas House in May, asking lawmakers to not legislate against LGBT Texans in their name.

In line with concerns that tourism officials have raised about the bathroom bill’s effect on the convention business, Curry and Jennings wrote that the bathroom bill could also keep the national church from holding its 2018 general convention in Austin. A bathroom bill would keep the church from ensuring that “all Episcopalians and visitors to our convention, including transgender people, are treated with respect, kept safe, and provided appropriate public accommodation consistent with their gender identities.

“Because we are currently scheduled to hold our triennial General Convention — a nine-day event that includes as many as 10,000 people — in Austin in July 2018, we are paying especially close attention to the news emerging from your special session,” Curry and Jennings wrote.

The church first raised the prospect of relocating its convention in February in its first letter to Straus. The church moved its convention out of Texas in 1955 because of the state’s segregation laws.

The divisions sowed by bathroom restrictions today ring similar to Jim Crow discrimination from that time, the church leaders wrote.

“We would not stand then for Episcopalians to be discriminated against, and we cannot countenance it now,” Curry and Jennings explained. “It would be especially unfortunate if this special session of the Texas Legislature presented us with the same difficult choice that church leaders faced more than sixty years ago.”