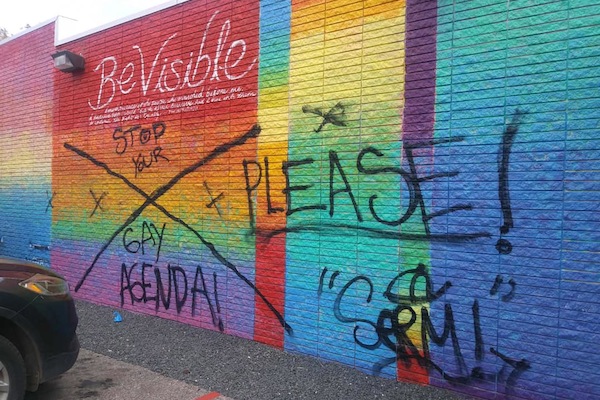 A rainbow mural located in the heart of Houston’s LGBT neighborhood has fallen victim to vandals who defaced the wall during the early morning hours of November 24.

The wall was created by artist Hugo Perez and is painted on the side of Jenni’s Noodle House in the Heights. It was unveiled last April in a ceremony featuring Jim Obergefell, the plaintiff in the lawsuit that helped legalize same-sex marriage in the U.S.

The multi-hued wall emulates the colors of the rainbow flag and is topped with the words “Be Visible” along with a quote by Obergefell which says, “I march because of the people who marched before me. Thanks to them, I live in a better world due to their bravery, and I owe it to them and those who come after me to continue the fight for equality.”

Vandals painted a large “X” across the wall along with the words, “Stop your gay agenda please!”

The rainbow wall at Jenni’s Noodle House is the second such mural to be located in Houston. The first was installed at the Select Skate Shop in Montrose in 2016 after the Pulse nightclub shootings. However, the owners of the building eventually decided to paint the wall black because it was getting vandalized regularly and the cost of repainting it became prohibitive.

Responding to questions about the vandalism, local photographer, Eric Edward Schell, the founder of Pride Portraits, said in a statement he believed the current political climate, exacerbated by President Donald J. Trump, is responsible for the rise in hate crimes in the U.S.

“This type of vandalism brings me right back to the Pulse shooting and the realization that people want our community silenced if not dead for simply existing,” Schell said. “Being visible in our community puts a target on our backs but visibility is imperative to our right to exist in society. That is why Pride Portraits was created and this wall was painted as an extension of the Pride Portraits Campaign.”

According to the TransGriot website, plans are underway to have the wall repainted and to install a security camera which was donated to help deter any future vandalism.

Musical Spoof ‘Gladiators in Love’ on Stage at the Overtime Theater

A semi-staged reading of a musical parody that spoofs movies like Spartacus, Butch Cassidy and the Sundance Kid and Brokeback...