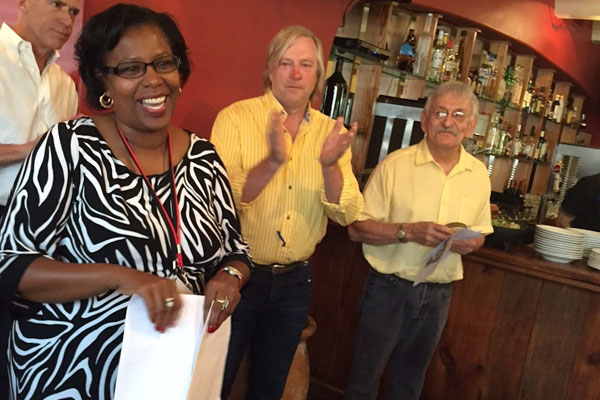 BEAT AIDS Executive Director Michele Durham accepts a 2015 funding award last June from Cornyation board members Tom McKenzie and Ray Chavez. BEAT AIDS will honor the Cornyation board with the Platinum Award at its annual banquet on October 16. (Photo by Elaine Wolff)

The theme for this year’s BEAT AIDS Coalition Trust’s Annual Awards Banquet, slated for October 16, will be “HIV/AIDS: It Takes A Village.”

“Now in existence for over 28 years, BEAT AIDS Coalition Trust continues to expand its programs and services to the community in our aggressive effort to end the spread of HIV/AIDS,” BEAT AIDS spokesperson Joie Holt said in a press release.

Holt invites the community to attend the banquet to “experience firsthand the pride we take in supporting those infected and affected by HIV/AIDS.”

The 2015 Platinum Award will be presented to the board of directors of Fiesta Cornyation in recognition of their long-time support of BEAT AIDS.

This year, Cornyation awarded BEAT AIDS $90,000, an all-time record. Last year the amount was $80,000 and in 2013 it was $70,000. This is in addition to contributions from previous years. The money is raised yearly at the six sold-out performances of Cornyation during Fiesta Week.

Cornyation also gave $90,000 to the San Antonio AIDS Foundation this year and awarded $20,000 in theater-arts scholarships to local students. According a 2015 press release, Cornyation has raised nearly $2 million for local HIV organizations since becoming a non-profit.

The BEAT AIDS Silver Award will be presented to Jesse Jones, M.Ed, a pharmaceutical representative at Glaxo Smith Kline, who “donates time and resources consistently to help in the effort to end the spread of HIV.”

The keynote speaker for the banquet is Ira Smith, Jr., a well-respected San Antonio community leader who currently serves as vice chair of the board at University Health System.

Smith is graduate of St. Mary’s University and is retired after working at CPS Energy for many years in a variety of leadership roles, including director of Central Services, director of Technical Services and director of Computer Services. In 2003, he was nominated to the Bexar County Hospital District’s board of managers by former County Commissioner Tommy Adkisson.

Many readers may recognize Justin P. Nichols as the cover model for last year's inaugural issue of this magazine. However,...