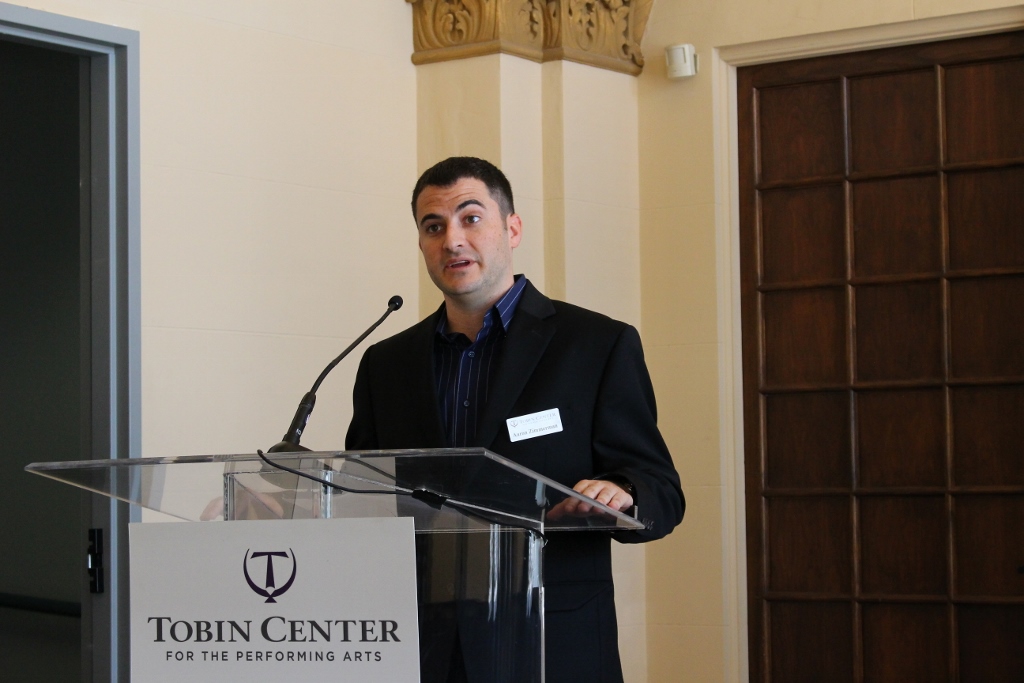 San Antonio poet and educator Ben V. Olguin is calling for the resignation of Aaron Zimmerman (above), senior director of marketing and programming for the Tobin Center. (Photo by Page Graham for the Rivard Report.)

A San Antonio arts activist is calling for the resignation of an official from the Tobin Center for the Performing Arts saying he is guilty of unprofessional conduct after publicly berating a local gay playwright.

An email initiated by poet and educator Ben V. Olguin calls for the resignation of Aaron Zimmerman, senior director of marketing and programming for the Tobin Center.

The email, which was released on October 26, has been shared widely among local artists, writers and arts supporters. It is now circulating on Facebook.

In that email, Olguin recounts an incident that took place on the stage of the Tobin’s Carlos Alvarez Studio Theater on October 5 after the final presentation of the performance piece, “Telling: SanAntonio.”

According to Olguin, the play had just concluded. Actors, technical crew and well-wishers were assembled on the stage having a few last words together when Zimmerman joined the group and started shouting at playwright Greg Barrios, who had participated in the performance.

Barrios is a well-respected figure in the arts community. His most recent play, “I DJ,” was performed in New York City last February. His reviews and features have appeared in some of the country’s most respected publications. He is a former book editor of the San Antonio Express-News, author of four books of poetry and numerous plays.

Olguin writes that Zimmerman walked up to Barrios and said, “You’re Greg Barrios, right? I’ve been waiting for this moment. But I was waiting for the last performance to tell you this. You wrote that stupid article in the Express-News!”

Zimmerman was referring to an August 22 editorial that Barrios had written titled, “Where are the Tobin’s Latino Events?” In the piece, Barrios criticizes the Tobin’s programing choices.

For a community that prides itself as a bilingual city with a Mexican-American citizenry of more than 60 percent, there is an egregious lack of Latino and Spanish language artists represented. In the 100 or so events on tap, less than 10 percent reflect the Latino majority who support and attend local sports, cultural and concert events . . . This flies in the face of our bilingual city’s claim as the capital of Tejano music. It’s almost as if our music, our artists and our culture are second-class to the ‘world-class’ artists selected.

According to Olguin, Zimmerman shouted, “I want you to know that I worked very hard to do this programming and then you come and say it isn’t right! . . . You mean to tell me that the five Latino acts we scheduled for this season isn’t enough?”

Barrios told Zimmerman he could voice his objections via a letter to the Express-News to which Zimmerman responded, “I don’t have to. The editor of the newspaper called me and apologized and said that this should never have run in the newspaper.”

Out in SA contacted Express-News op-ed columnist O. Ricardo Pimentel who assigned the editorial to Barrios. In an email he responded, “Mr. Barrios told me of the incident via e-mail. I wasn’t there. As for an Express-News editor apologizing because the Opinion section published Greg’s op-ed, I have no idea who that would  be — but no one on the Editorial Board did so.”

In a telephone interview with Out in SA, Barrios confirmed Olguin’s version of events.

At press time, Zimmerman had not responded to email and phone messages asking for his comment on the incident.

Out in SA did hear from Christopher Novosad, the Tobin’s senior marketing manager who said he could not speak on Zimmerman’s behalf. However, he said he read Olguin’s email and that it was “a fabulous account of something that never happened.”

Olguin says Zimmerman should apologize for his “unprofessional conduct.”

He concludes by saying city and Tobin officials “need to investigate the propriety of having one Tobin Center executive managing both programming and marketing,” adding that “Zimmerman should be placed on administrative leave lest he use his administrative authority to assault another performer and continue to abuse his power.”

Olguin’s final suggestion: “. . . Aaron Zimmerman can do the city of San Antonio a favor and resign immediately.”

(Special thanks to the Rivard Report for permitting the use of Page Graham’s photo.)