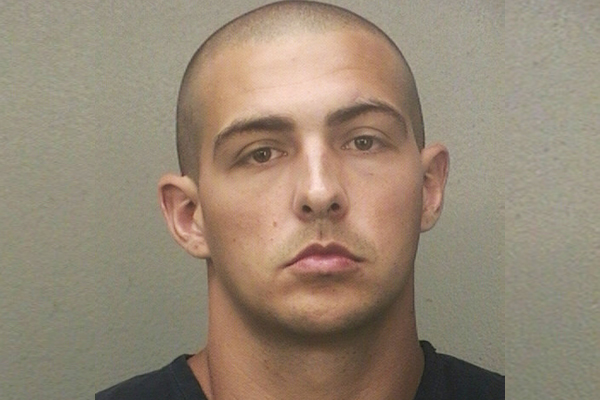 San Antonio-born John “Champ” Snavely was charged with the murder of Sam Del Brocco in December 2013 after his DNA was taken during a drug arrest in Miami and later was found to match DNA at the scene of Del Brocco’s murder.

A report in the Miami New Times at the time said Del Brocco met Snavely at the Boardwalk, a strip club in Ft. Lauderdale. Del Brocco took Snavely back to his $850,000 townhouse in Pompano Beach where, “in an apparent struggle, Snavely stabbed him to death.”

At the time of Snavely’s arrest, the Washington Post reported the 60-year-old Del Brocco had a “colorful life as a psychologist, rock musician and finally chief executive of a consulting company in Alexandria (VA).”

Police said Snavely’s DNA was taken from a can of soda in the apartment and his fingerprints were found inside Del Brocco’s car. According to the Washington Post, “At first, Snavely denied knowing Del Brocco or being in his townhouse. In a second interview, he admitted being in the home but said he and Del Brocco left after about 90 minutes and peacefully parted ways.”

Williams filed a motion to dismiss the case, citing Florida case law which holds that circumstantial evidence cases “cannot be sustained unless the evidence is inconsistent with any reasonable hypothesis of innocence.” Williams cited the movement of Del Brocco’s cell phone to indicate that he went to Fort Lauderdale, then to the Pompano townhouse, then made a second trip to Fort Lauderdale where he may have picked up a second man whose DNA was on the murder weapon. Williams also suggested that Del Brocco was in the process of ending a relationship with a man in Northern Virginia who stood to inherit half of Del Brocco’s estate, and that man had a motive to kill Del Brocco.

After hearing Williams’ motion to dismiss, Broward Circuit Court Judge Ilona M. Holmes wrote, “This evidence is not enough . . . there are no eyewitnesses to the crime, the murder weapon was recovered with someone else’s hair and DNA on it. Shoe prints with victim’s blood were never matched to this defendant. Defendant has never confessed to committing this crime and no one has come forward attesting to any suspicious activity on Defendant’s part.” A man with a troubled past

Snavely was born in San Antonio into family with an absent father and a mother who had constant run-ins with the police. As a teenager, Snavely racked up a police record for a series of petty crimes.

When he was stripping in San Antonio, the Miami New Times reports Snavely, “began by dancing for women but switched to stripping for men because it paid better. Soon he was offering ‘private dances’ to male customers. He would go with them to their homes, leading them to believe they’d get more than a dance.”

The Washington Post says Snavely “was wanted in Texas for violation of probation on assault charges and has been arrested multiple times on drug possession charges, according to police records.”

Snavely was “gay for pay” Caro told the New Times.

Art Historian Ruben C. Cordova to Lecture on the ‘Penis in Art’

From the ancient Greeks to the work of Robert Mapplethorpe, the penis in art has had an extensive treatment, one...