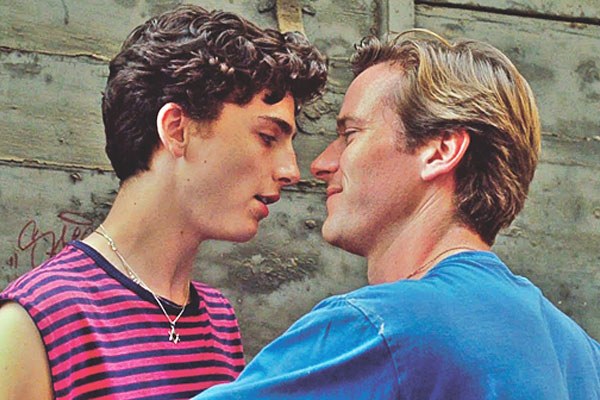 Timothée Chalamet and Armie Hammer in "Call Me By Your Name." (Photos courtesy Sony Pictures Classics)

Nothing makes young love prettier than how much time has passed from it. Distance bestows rose-colored glasses that blot out all of the dumb awkwardness and leave nothing but the warm, squishy feelings we associate with fledgling romance. Throw in a sumptuous Italian countryside summer, and you’ve got the basics of Call Me By Your Name, the latest film from Italian director Luca Guadagnino. The film has garnered praise for its stigma-free depiction of a homosexual romance between two young men, Elio (Timothée Chalamet) and Oliver (Armie Hammer), and rightly so. The warmth of the love story manages to overcome some significant flaws with the film.

Set in the hot, languid summer of 1983, Call Me By Your Name follows Elio, a 17-year-old American, whose family is spending the summer at a northern Italian villa while his father (Michael Stuhlbarg), an archaeology professor, works on a manuscript and oversees an underwater dig nearby. Enter Oliver, his father’s grad student assistant. Oliver is a consumptive force of nature. Tall and handsome, he’s constantly entering or leaving rooms, devouring food or dominating conversations. It’s not long before Elio’s initial revulsion to this “ugly American” turns to a voracious desire, though it takes the film about an hour to get there.

That indulgence in the pathetic fallacy – emphasizing the slow blossom of romance between the two leads by being slow itself — may stretch the patience of some viewers. Thankfully, the snail’s pace of the film allows screenwriter James Ivory (adapting the 2007 novel of the same name by André Aciman) to fill the script with snappy dialogue and humorous vignettes. (The beautiful scenery of rural Italy, shot by Sayombhu Mukdeeprom, doesn’t hurt either.) Chalamet’s performance as Elio in particular garners (almost) enough goodwill to offset the pacing problems. He hits that distinct teenage balance between cocky assuredness and bashful naïveté. Hammer, for his part, leverages all of the Ivy League entitlement smarm he showed playing the Winklevoss twins in The Social Network, but manages to make it charming somehow.

Not charming, however, is how Elio and Oliver — and the film — tend to treat the female characters. Elio is carrying on a summer fling with fellow teenager Marzia (Esther Garrel) at the beginning of the film. Marzia obviously adores Elio, but he only seems to use her as an outlet for his conflicted feelings about Oliver. Once the Elio/Oliver ’ship starts sailing, he unceremoniously ghosts her and can only manage a half-hearted shrug when she confronts him. Oliver, meanwhile, seems to delight in leading on the smitten Chiara (Victoire Du Bois), and most of the scenes of his callous deception of her are played for laughs.

The sumptuous setting and complex performances can’t stave off the feeling that the film — like Elio and Oliver’s relationship — exists in a bubble. The multicultural, academic family of Elio — who speak at least four languages fluently and read medieval poetry to each other — are picture-perfect in every way. While it’s nice to see an accepting, loving family on film for once, the lack of qualms given about their teenage son developing a romantic relationship with a man nearly a decade older than him is sure to raise eyebrows. In fact, the only impediment to Elio and Oliver’s relationship seems to be the end of the season when Oliver has to return home, a predicament that doesn’t seem to reflect most gay love stories set in the era of AIDS and the Reagan administration. But maybe that’s the comfort that you get if your family can afford to use “summer” as a verb.

On January 12, the Washington Post reported that during a meeting with lawmakers on immigration President Donald Trump made a...