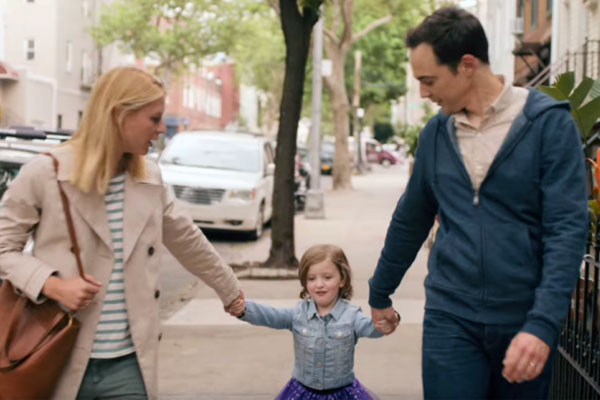 Alex and Greg Wheeler (Claire Danes and Jim Parsons) are like any other parents of a four-year-old child. They want their son Jake (Leo James Davis) to get a good education, have friends, be happy and express himself creatively in any way he sees fit.

They come to a defining moment in their lives when they receive advice from Jake’s preschool principal (Octavia Spencer): When applying for private schools for the following year, they should include in their admissions essay a few anecdotes about their son’s vast imagination and interest in “gender-expansive play.” That might help him land a spot in the competitive New York City school system.

The fact that Jake likes to play with dolls, watch Disney princess movies and has his heart set on dressing up as Rapunzel for Halloween never struck the Wheelers as a trait they should call attention to. But they realize it’s something they have to confront now that he’s older. The Wheelers (Greg is a therapist and Alex is a stay-at-home mom and former lawyer) want to protect him from the cruel world. And they don’t “want to send him to kindergarten labeled.”

Adapted from his own stage play of the same name, playwright and first-time screenwriter Daniel Pearle and director Silas Howard (TV’s Transparent), who is a transgender man himself, find a way to let the compassionate narrative triumph by the film’s end.

However, they miss sharing a perspective that would’ve allowed the story to resonate even more – the viewpoint of the title character is missing.

As Pearle and Howard tell the story, A Kid Like Jake should have instead been called Parents with a Kid Like Jake since it’s the adults who are always deliberating, arguing and worrying without giving Jake time to project any actual emotion himself. It’s obviously a purposeful decision (in the play, Jake is an unseen character), but it’s flawed, especially for the screen. Instead of allowing Jake to question things like any inquisitive boy would, the Wheelers talk about what it’s like for them to hear him question things. Instead of getting to the root of who Jake actually is, we’re spoon-fed information about his personality.

Luckily, Danes, Parsons, Spencer and Anne Dowd, who plays Alex’s slightly overbearing mother, give strong performances in a handful of scenes where adult discussions about Jake’s well-being feel genuine. The most realistic scene takes place when Alex and Greg go out to dinner with friends and the banter between them shifts from cordial to uncomfortable when the subject of Jake’s “creative role playing” comes up. Watching adults complicate an already complicated situation is good theater, but what A Kid Like Jake needed more of childlike wonderment. With it, it could have been a film with deeper impact, not just a conversation starter.

Originally published in the San Antonio Current. It’s an muggy Sunday evening as I step out of the car and...