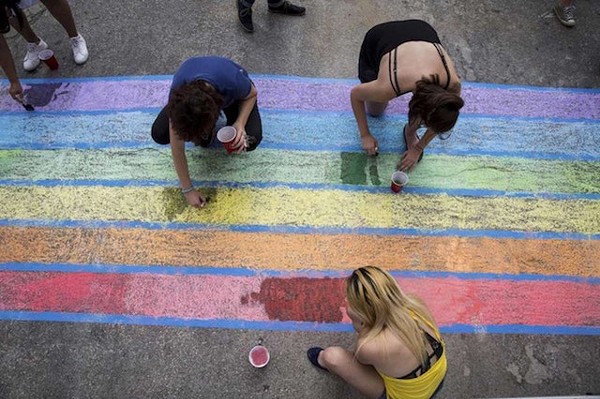 A group of volunteers painted a set of rainbow crosswalks in chalk on Main and Evergreen Avenues on the day of the 2017 Pride festival and parade. (Photo via Kickstarter)

In June, the San Antonio City Council approved a permanent Pride-themed rainbow crosswalk for the Main Avenue and Evergreen intersection — however, they’ll only be paying half of the construction costs, which leaves District 1 residents with a $30,000 tab.

In response to this hefty financial responsibility, James Poindexter, board secretary of Pride San Antonio, launched a Kickstarter campaign on October 23 hoping to crowd source the community for the crosswalk funds. On July 1, the day of the Pride festival and parade, a group of volunteers painted a set of rainbow crosswalks in chalk on Main and Evergreen avenues. (Photo by Juilan P. Ledezma)

“Members of the San Antonio LGBT Community pondered ways in which color, art, and identity could converge in our public spaces to show a defined space that was welcoming to LGBTQ+ people and the community in general,” Poindexter writes on Kickstarter. “There is a variety of public art to be found throughout San Antonio, but there was nothing that was uniquely LGBTQ+ in nature.”

The Kickstarter campaign has currently raised $1,075 with 27 backers. The rainbow crosswalk will only be funded if donations reach the $30,000 goal by December 22. Payments will be charged only if the project is successfully funded.

District 1 got its first taste of this potential permanent installment at Pride Chalk It Up on July 1 which was organized by local attorney Rosie Gonzalez. City Councilman Roberto Treviño participated with local artists to chalk a temporary rainbow crosswalk at the Main Avenue Strip for Pride.

It was always a dream of actor Chaz Bono to star in the hit FX Network anthology American Horror Story....